The Caine is about the story, not the writer: On the Shortlisting of a former winner 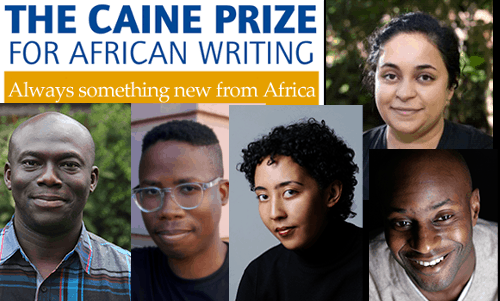 This is not the first time for a writer to have two stories shortlisted in different years. Billy Kahora has had two of his stories, Urban Zoning and Gorilla Apprentice on different shortlists of the same prize. His other story The Applications was also highly recommended in a past year. Doreen Baingana has also had two of her short stories shortlisted in two different years. And others. But for three writers of formerly shortlisted stories to appear on the same shortlist is a record. Like having a writer of a former winning story being shortlisted, even if with a new short story. What does this mean?

In announcing the shortlist, the prize administration stated; “In a sign of the established calibre to be found in African writing and as the Caine Prize matures in its sixteenth year, the shortlist includes one past winner and two previously shortlisted writers.” Former winner of the prize, E.C Osondu was among the first to express their thoughts on the development.

Billy Kahora has had two of his stories selected on different shortlists for the same prize. Photo: Paul Munene

“I find it kind of strange that one of the shortlisted writers is a former winner of the prize. So is he going to win and un-win the prize? Past winner and now shortlisted? I have always seen the prize as a kind of door-opener- if you will- you win and move on to publish your books and leave room for other up and coming writers. Did the judges even consider how their decision to shortlist a past winner is going to complicate things going forward?”

It is easy to see why many will agree with Osondu. After winning the Caine Prize, or being shortlisted for the prize, many writers have gone on to write novels that have also been acclaimed critically and have won bigger prizes. NoViolet Bulawayo is one of the most outstanding examples. Her winning short story Hitting Budapest, forms the first chapter of her We Need New Names novel that has won and been shortlisted for small and big prizes, breaking several records, including that of becoming the first African woman to be shortlisted for the Man Booker Prize since 1974 when it was won by Nadine Gordimer. EC Osondu himself has two critically acclaimed books to his name, Voice of America and This House is Not for Sale. Osondu is quick to add that this reputation of the Caine as a discoverer of new African writing talent is not supported by the rules of the prize. He writes:

“There is nowhere in the rules where it says past winner are barred from entering. It is simply that this prize is meant to open doors – you get introduced to agents and probably get a book contract. So if a past winner who has published a couple of books is entering for the same prize many years down the road I consider it strange. There is an unwritten protocol to literary prizes. This prize is over ten years old why has no past winner won again nor have they been on the short list?”

Screenshot of past Caine Prize winner and novelist, Noviolet Bulawayo.

From the statement in the press release, it seems to me that the prize, after fifteen years, is coming of age and ready to take on an identity it was meant to, but probably could not earlier on because there were not many seasoned African writers as there are now. There are a number of prizes for emerging writers on the continent at present, so one may say that the Caine Prize does not have to be the discoverer of new talent anymore. This could be said to be a way of the Prize supporting these other prizes and initiatives that focus on the emerging writer. To indulge a little, the Writivism Short Story Prize, an initiative supported by many former Caine Prize winners and shortlistees (NoViolet Bulawayo and EC Osondu sit on the Writivism Board of Trustees) is one of those that focus entirely on the emerging writer, based on the African continent.

The shortlisting of a story by a former winner, and many stories by formerly shortlisted writers is thus an important identity-marker for the Caine Prize. It is not a prize for emerging writers, it probably played that role when there were not many prizes for African writers, and of course emerging writers can still submit their stories and if they are good enough, may get shortlisted as FT Kola’s has been. What matters most is the submitted story, whether the writer is emerging or established. This means that established writers as Chimamanda Ngozi Adichie, former winners as Binyavanga Wainaina are still eligible to submit their short stories to the prize. Even a past winner of the Nobel Prize for Literature, as long as they are African, can submit their published short story for the prize.

In the mélange of literary prizes and awards for African writers, as in other literary communities, each requires a specific identity. The Caine’s identity is for the best African short story written in English in a year. Does not matter if the writer is established or emerging, or based on the continent or in the diaspora. The Etisalat Prize for African Literature is awarded to the best first-time published African fiction writer (in English); the Brunel University African Poetry Prize aims at finding African poets who are yet to publish a full-length poetry book and looks at ten submitted poems; the Mabati-Cornell Kiswahili Prize for African Literature targets unpublished manuscripts or books in Kiswahili whether they be fiction, poetry, memoir or graphic novels; the Golden Boabab Prize is given to African writers of children and young adult short stories; the Sillerman First Book Prize for African Poets is awarded to full length unpublished poetry manuscripts or self-published poetry collections; the once-off Kwani Manuscript Prize focused on unpublished fiction manuscripts in English (one hopes that it will become a regular prize); the Jalada Prize for Literature is awarded to stories and poems published by the collective in a year: and the Writivism Short Story Prize focuses on short stories by emerging (unpublished) writers based on the African continent, to mention but a few.

To answer a question that Oduor Jagero, a Kenyan novelist asked at the Uganda International Writers Conference convened by African Writers Trust in Kampala in March, 2015, regarding the multiplicity of prizes for African writing, each prize has a specific mission, an identity, something that makes it unique from other prizes. The Caine is about a short story by an African writer.

Having a former winner in contention for the prize again makes an important point about non-hierarchisation of prize winners. Winning the prize for one short story means that the particular short story that won was brilliant, well-written etc. in the opinion of the judges for that year. Indeed focus has swiftly shifted to the stories, as a string of tweets by Ikhide Ikheloa on this year’s shortlist shows. He tweeted:

6. The 2015 @CainePrize shortlist is probably the weakest line-up in the history of the prize. Baffling how several of them made the list.

9. @elnathan is the better writer, but I liked F. T. Kola's story out of the @CainePrize list. Even it seemed like mere reportage at times.

Ikhide’s tweets are critical, he suggests that the prize has not found the best short fiction this year, but the undertone seems to be that, he expects them to do that, than recycle writers of formerly shortlisted and winning stories, when their entries are weak. This for me, makes the important point that the prize is not necessarily about the writer but about the story. You can tell that, from the five stories shortlisted, Ikhide likes the emerging writer’s more than the rest. Despite the controversy, this year’s shortlist helps the Caine Prize continue to delineate its identity as a prize.

Europe: The view from Africa