Dynamos versus Highlanders: A fierce derby of African football on Zimbabwean soil 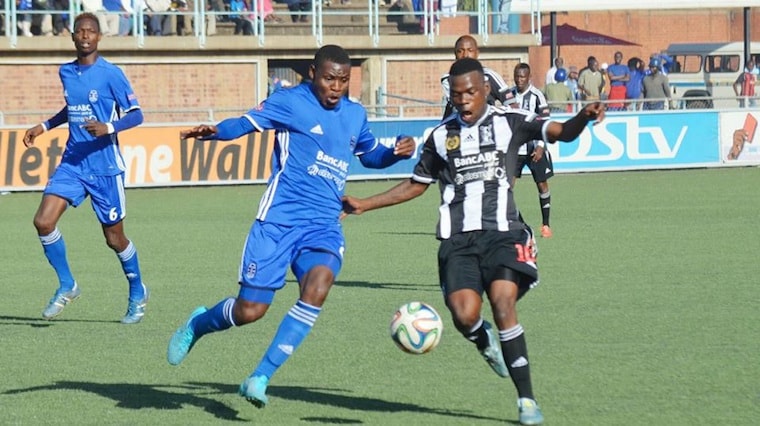 The history at play here has always been viewed as a topic that was kind of taboo; something sensitive people were not comfortable talking about. Yet in the stands at Barbourfields Stadium they sing about it with heart and conviction, without a sense of guilt and shame; loud, for all to hear.

It is belted out in unison, by those who fanatically believe in the content of the message in the songs – and also by otherwise sensible men in the stands who perhaps do not realise the degree of hatred in the message. Yet they  sing along, for the love of their club and culture.

“Linga maShona, heeya lalibulala obaba, heeya!” (You are Shonas, yes! You were killing our forefathers!)

The message from the supporters of Highlanders Football Club to the Dynamos is clear and it draws on symbols of Shona oppression and hegemony against the minority Ndebele tribe. (Ndebeles make up 20% of Zimbabwe’s population.)

Highlanders was formed in 1926 by two grandsons of the last Ndebele king, King Lobengula, Albert and Rhodes. The latter was named for the empire builder who vanquished his father.

Our club, our culture

For Nqabutho Khumalo, a die-hard Highlanders fan, there is no need to beat about the bush: Highlanders is a Ndebele project, formed by the Ndebele royal family, “for Ndebele people and Ndebele identity and pride”.

“The football club is the only thing we have,” says Khumalo, who is a member of the Highlanders Fans Club in Harare.

“It’s not just about football, it’s about being Ndebele; defending the culture. Those are the founding principles. That is why we can accept losing to any other team from Harare, but not to Dynamos. To us, Dynamos represents Shona domination. We know they do not like us. And we do not like them back.”

“It’s not just about football, it’s about being Ndebele; defending the culture”

The Ndebele people of Zimbabwe are descendants of Mzilikazi, one of Shaka’s generals. When Mzilikai fell out with Shaka in the late 1830s, he led a faction that fled and settled in what is now south-western Zimbabwe, now called Matabeleland. Their capital was established near the site of the present-day city of Bulawayo. Mzilikazi was the first king of the Ndebele nation.

No sooner had the new tribe settled than relations with the majority Shona tribe became acrimonious. The Shona-speaking people Mzilikazi came in contact with were found north of the Shangaan river, a river near Bulawayo.

Inter-tribal resentment started with the famous Ndebele raids into Shona territory, until the colonisation of the country in the 1890s. Ndebele warriors raided Shona women and cattle. Perhaps nowhere is this rivalry set down in more compelling terms than in writer Solomon Mutswairo’s historical novel Chaminuka, about a 19th-century Shona prophet and businessman. “Lobengula and his people have been fed and nourished by the abundance of our land. But despite it all, he continues to flout the better part of his judgment, and to act as a freebooter here where his people have taken refuge.”

Chaminuka, who prophesied the arrival of Cecil John Rhodes, was himself killed on the orders of Mzilikazi in the 1860s.

“We do not condone insults that are hurled by fans or other songs with derogatory messages. At Highlanders, three-quarters of my players are Shona, but you still hear some hooligans insulting the Shona tribe”.

But today, the biggest source of Ndebele anger is Gukurahundi, a military-political operation in the 1980s. It was ostensibly aimed at ridding the south and west of Zimbabwe of a few hundred armed “dissidents” but up to 20 000 innocent Ndebele civilians were killed. Some believe the genocidal operation was meant to eradicate support for PF Zapu, a party led by Joshua Nkomo, whose support was predominantly in the south and west of the country.

To this day, many Ndebele people blame the ‘ethnic cleansing’ on the Shona leaders in President Mugabe’s ruling party, Zanu-PF.

The association between Dynamos and Zanu-PF is an easy one to make. Zanu-PF politicians have a tendency to associate with Dynamos in order to ride on the club’s popularity. Consequently Dynamos has become a focal point for Highlanders supporters’ hatred. Likewise, the Highlanders club’s links with the Ndebele nation, the city and the region are obvious. Highlanders started off as Lions Football Club, and then became Matebeleland Highlanders Football Club, until Nkomo asked the team to excise ‘Matebeleland’ from their name in a nation-building, anti-tribal effort.

Dynamos is Zimbabwe’s biggest and most successful club, despite being formed much later, in 1963. It has won an incredible 22 league titles and draws support from all the areas outside Matabeleland.

Highlanders is second in terms of success, with nine titles – the last of which was 10 years ago, in 2006. The rivalry extends to players who have turned out for the two teams. In the 1990s, a perennial debate was who the better player was between winger Peter Ndlovu (Highlanders, Coventry and Sundowns) or midfielder Moses Chunga (Dynamos and SC Eendracht Aalst). In fact, most people agree that one of these two players deserves to be crowned the best Zimbabwean footballer since 1980.

The last decade has been traumatic for Highlanders, a source of great personal anguish for the club’s fans. This has been made worse by the fact that Dynamos have had runaway successes in the same period. Between 2011 and 2014, Dynamos stretched their dominance by being crowned champions four times in a row. That hurts so bad, especially if you are a Highlanders supporter.

In those same 10 years, Highlanders has come close a few times to ending the barren spell. On these occasions, Dynamos had also been strong and in the running, ensuring some of the most emotionally charged and intensely contested matches you could see anywhere in the world.

Barbourfields Stadium, the Highlanders home ground in Bulawayo, and Rufaro Stadium in Harare are full when the two old enemies clash. Crowds of 40 000 people or so bay for blood – quite literally, at times. On a few occasions, violence erupted and games had to beabandoned.

To Highlanders supporters, losing to Dynamos has become a painful reminder of the political incidents of the past.

For Dynamos, the pain the Highlanders endure is something to savour. The Harare team has its own songs and taunts that are rubbed in when, as has been the case for 10 years, it wins the derby. It was only in May 2016 that Highlanders broke a 10-year jinx by beating Dynamos in a league match. (Doesn’t this remind you of the time, between 2002 and 2013, when Atletico Madrid went more than 10 years without beating Real Madrid?)

‘DeMbare’ and ‘Bosso’ are the nicknames most often used for Dynamos and Highlanders respectively. The moniker ‘DeMbare’ comes from the Dynamos’ roots in Mbare, Harare’s oldest black township, established in 1907. ‘Bosso’ is derived from Tswana slang for ‘the boss’.

Another common Dynamos slur is: “MaNdevere munowapireiko doro, anonetsa kana adhakwa!” (Why do you give these Ndebeles beer? They are trouble when drunk!) In a society in which being able to drink all the beer in the barman’s fridge and still walk home with a clear head is a sign of one’s strength, this song is especially hurtful.

And then there is the song that really sends Highlanders fans into fits of rage, because it is a corrupted version of their own song, which they sing in protest over match officials: “Into yoyenzayo siyayizonda! Into yoyenzayo siyayizonda!”. Highlanders supporters sing this to tell the referee, “We don’t like what you’re doing! We don’t like what you’re doing!”

Hating losing to Highlanders is also something that’s part of Dynamos players’ indoctrination and initiation. Tawanda Murerekwa, a former Dynamos official, told This Is Africa: “When I was there, you hardly had to motivate the players ahead of games against Highlanders; it was just a natural thing. For those who grew up in the club system, the desire to beat Highlanders was something they inherited from the senior guys. Even on those who joined the club from elsewhere, it just rubbed of so easily. Dynamos is a big institution. The supporters are unbelievable. The loyalty is so fierce. So is Highlanders.

“I remember driving to Bulawayo for matches (against Highlanders) and seeing the convoy of supporters’ cars on the highway, people singing all the way; the passion for the club. It’s an experience I will savour for the rest of my life.”

Player movement between the two clubs has rarely been direct. Because Dynamos is a bigger club and considered to have better exposure to fertile playing grounds outside the country, a few Highlanders stars, such as former club captain Lovemore Ncube, crossed the great divide at the peak of their careers. They instantly became figures of hatred in the streets of Bulawayo. Highlanders players with a Dynamos background, or sometimes just Shona-speaking players (even including those born and raised in Bulawayo and other Ndebele areas) are viewed with suspicion. They are darlings when they do well, and reminded of their origins when they aren’t.

Recently, Highlanders chief executive, Ndumiso Gumede, broke a taboo when he dared speak out against tribalism. It was in the aftermath of crowd trouble during a game between his club and defending champions Chicken Inn, a game in which tribal slurs were traded.

“Tribalism is also a big problem,” Gumede told the Bulawayo-based state-controlled Chronicle newspaper. “We do not condone insults that are hurled by fans or other songs with derogatory messages. At Highlanders, three-quarters of my players are Shona, but you still hear some hooligans insulting the Shona tribe. We do not condone incidents of hooliganism, pitch invasion, inflammatory tribal utterances and songs. Football is played by the players for their sustenance and to entertain the fans.”

It was a brave statement by Gumede, a well-respected personality in the Ndebele community who, like others, could have chosen to bury his head in the sand, rather than be seen as reprimanding his own.

But Gumede is 70 years of age and has seen life from both sides as a former school teacher in Harare and as an experienced football administrator who has also previously served as the CEO and then as the vice-president of the national association.

On Sunday, 11 September 2016, the two rivals clash again, at the Barbourfields. The stakes are not as high in terms of title permutations. Both teams have been playing second fiddle this season. Highlanders, in third position on the log standings of the Premier Soccer League, are six points behind leaders and title favourites FC Platinum. Mathematically, Highlanders, under their Dutch coach Erol Akbay, have a chance to win the league.

It would take something special at the business end of the season for Dynamos to be champions: They are in fifth position and nine points behind Platinum.

Altogether, stats and erratic form suggest neither team is likely to win the PSL this season.

But make no mistake, there is everything to play for; if not the league title, then protecting the two great clubs’ heritage and history. There is definitely going to be no holding back, there is not going to be any pulling of punches. Not literally, we hope…

How MTN’s MoKash has changed the banking landscape in Uganda