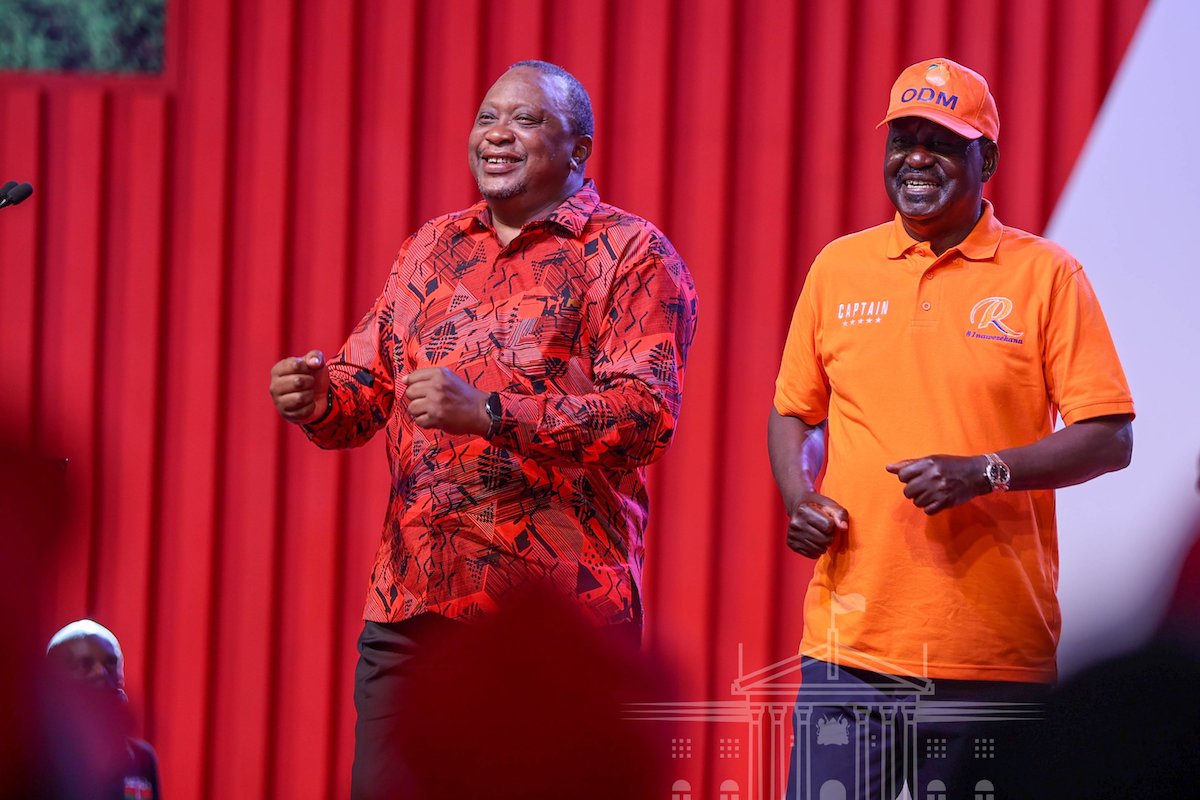 At the height of the global Coronavirus pandemic in the last quarter of 2022, I met a friend at a senior members’ social club in Kiambu County. The exclusive club still open, meant that the society’s upper crust continued to socialise without worrying about police harassment, over not keeping the distance as they enjoyed their favourite juice.

Politics is always at the lips of most Kenyans. As we ate and drank, the group I was seated with naturally turned to political talk. “I’ll never forget what my Nanyuki British landowner told me in 2013,” reminisced a businessman. “You guys have elected a monarch, you’ll live to rue the day. We’ve lived with a monarch for the last 1000 years and we’ve been unable to dislodge it.”

The monarch he was referring to was Uhuru Kenyatta, then the The National Alliance (TNA) presidential candidate, who had magnetised his base (the Kikuyu nation) to emotionally vote for him in the March 2013 presidential elections. Candidate Uhuru had been fingered as one of the infamous “Ocampo Six”, the well-known public officials who the International Criminal Court (ICC) claimed were the most culpable in the 2007 post-election violence. The six were: Uhuru Kenyatta, former head of civil service secretary to the cabinet Francis Muthaura, former Police Commissioner Major-General Hussein Ali, William Ruto, vernacular radio talk show host Joshua arap Sang and former cabinet minister Henry Kosgey.

Irony and politics oftentimes go hand-in-hand: it was not lost on some of us on the irony of the supposedly British landowner’s remarks. The expansive Nanyuki plateau, 200km north of Nairobi city in Laikipia County, is the playground for many foreigners, majority of them of British descent, who own huge tracts of land, acquired with the help of a retreating British empire, after World War (II).

Six months to the August 9, 2022 presidential elections, President Uhuru’s billboards are all over the Nairobi city’s conurbation, his huge beaming portrait staring you in the face. Today’s African big man’s desire to be loved and pervade both the private and public space of his subjects, is not any different from his post-independence predecessors, who ruled in the single party era and who considered themselves presidents-for-life.

In the new constitutional dispensation of two-term limits, now commonplace in many African polities, this big man’s syndrome, seems to have found new meaning and avenue. The post-independence presidents made sure their portraits were everywhere – on the country’s currency notes and coins, in business premises, churches, government offices, schools and homes.

The African big man suffers from the tragedy of longevity in office: once made president, they create a career out of the presidency, surrounds himself (it’s hardly a she), with acolytes, hangers-on, layabouts, loyalists, praise-singers, yes-men and a few yes-women. Look around on the continent – you cannot fail to spot them: Denis Sassou Nguesso of Congo Brazzaville, Teodoro Obiang Nguema of Equatorial Guinea, Paul Biya of Cameroon, Yoweri Museveni of Uganda and Robert Mugabe who died in 2019.

In Africa, 60 years of age, in presidential terms, is considered to be a toddler – in a continent where presidents have been known to collapse in office

In Africa, 60 years of age, in presidential terms, is considered to be a toddler – in a continent where presidents have been known to collapse in office, whose health status is a top government secret – they are always sneaked out of their countries in the dead of the night, for treatment abroad and who cannot be in a meeting and not be in “meditation” the entire period, irrespective of the time. President Uhuru will be 61 years by October, 2022, when the country will have held its seventh multi-party presidential election and the third after the promulgation of the new constitution in August 2010.

In the 1970s–1980s, when Organisation of African Unity (OAU) reigned supreme, the African despots would meet annually in some designated capital city, to compare notes, but most significantly, to congratulate each other for surviving yet another year. It was a presidential club, where most of these presidents-for-life would be glad to stamp their presence and hope to see each other in another year, that is, if they weren’t deposed by the military junta, who more often than not, killed them.

The military coups of the 1970s and 1980s have since been replaced by “democratic coups” of the post-1990s multiparty era, where the incumbent presidents have perfected the art of rigging the votes and subverting electoral processes. They have been doing these by manipulating the voter registration data, shutting down the social media, tampering with the biometric machines that count the votes, orchestrating power blackouts and refusing to open computer servers indefinitely. Hijacking opponents on their way to present their nomination papers and stuffing ballot boxes is today considered both archaic and absurd.

The recent West Africa military coup d’états are a tragic replay of what used to be normal occurrence of Africa of yester-years.

The presence of President Uhuru’s billboards is spawning silent murmurs from Kenyans: what do these billboards portend? Why does Uhuru need to remind us of his presidency, six months to his exit? At the club, there seemed to be a consensus that President Uhuru did not behave like a president who wanted to leave after his constitutionally mandated two-terms are over. “I’m persuaded the Building Bridges Initiative (BBI), is more than meets the eye. It’s a project geared to secure a post-presidency position for Uhuru after 2022,” said one elderly man. I later learnt he was one of the county’s BBI representative.

The BBI came about after President Uhuru Kenyatta and Raila Odinga, his most stringent nemesis in two successive electoral contests – 2013 and 2017, seemingly buried their hatchet and shook hands on March 9, 2018. The initiative was the immediate aftermath of the détente.

There’s no smoke without fire. This talk about President Uhuru’s ostensibly not being keen to leave office after August 2022 general election, has been apparently stoked by his yes-men and praise-singers, including himself.

Addressing his base from Sagana State Lodge in September 2019, where the President retreats to, when he wants to connect emotionally and linguistically with the Kikuyu people – the President finds refuge speaking in his mother tongue – President Uhuru reportedly quipped: “I do not know the contents of BBI report, yet I hear people claiming Uhuru Kenyatta wants to become the Prime Minister of Kenya. I wouldn’t mind being in leadership in such a post.”

Three months after this rather odious statement from the President, his acolyte and former Jubilee Party vice-chairman, David Murathe reiterated in November that President Uhuru would stay on as prime minister. Said Murathe to Citizen TV: “Uhuru is going nowhere. . .there is going to be new formations. . .they can even agree with the former prime minister (Raila Odinga) (for him) to run for the presidency of this country. . .the leader of the party with the majority seats as per the BBI recommendations forms the government and if Uhuru is the party leader, he’ll form that government.”

In September 2020, in an interview with the weekly Sunday Nation newspaper, Francis Atwoli, the Central Organisation of Trade Unions (COTU) boss, revealed that once the constitution is changed, President Uhuru would be eligible to apply for another term. Atwoli, who has a penchant for hiring Congolese crooners to sing his praises, was referring to BBI, which, if it’s passed by the Supreme Court, will elicit a constitutional change through a referendum.

“Uhuru Kenyatta can use the envisioned change to remain president beyond 2022. Why are people pretending that they don’t know (Daniel arap) Moi after the constitutional change of 1991 remained in power for another term?” growled Atwoli. That aside, the flamboyant trade unionist, who, oftentimes will be spotted bedecked in jewellery chains and bracelets, has on several occasions intimated that President Uhuru is too young at 60 years to retire. Charity Ngilu the Kitui County governor recently joined the chorus, claimed President Uhuru was too young for his wisdom to go to waste.

Two months after Atwoli, one of President Uhuru’s now most vocal yes-man, made his remarks known, Raphael Tuju, the immediate former secretary general of Jubilee Party, said in November: “I want to state that there is consensus especially from those of us holding senior positions in the party that it still needs Uhuru’s passion to bring this country together.”

The cantankerous Atwoli was at it again: as ODM endorsed Raila on February 26, 2022 as its August 9 presidential flagbearer, the trade unionist bellowed yet again that President Uhuru was a youth, that BBI was on half-time and that once Raila forms the government after August, it will be revived and a position created to accommodate Uhuru Kenyatta.

As recent as February 10, 2022, Deputy President Ruto claimed rather boldly that his real competitor was hiding behind the Orange Democratic Party (ODM) leader. Raila is the leader of ODM and the apparent insinuation is President Uhuru is shadowing Raila, as he prepares to take on Ruto on August 9. But could this be true?

Cartoon | Between a rock and racist place