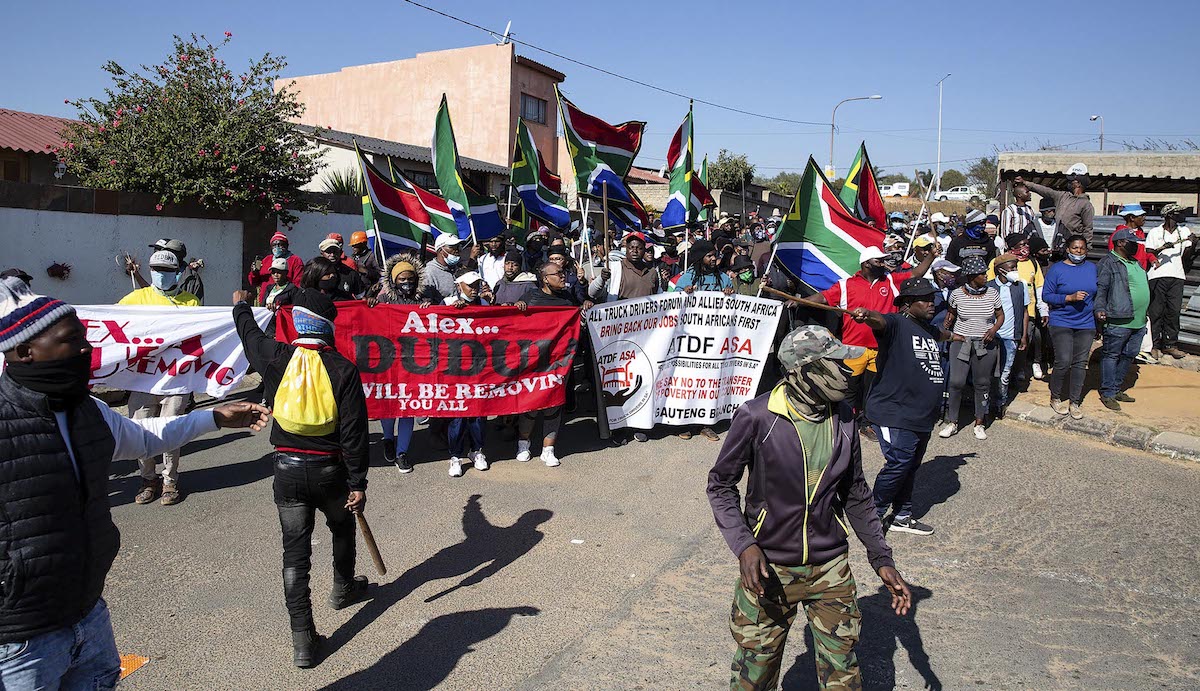 Much has been written about the EFF and the Patriotic Alliance’s xenophobic politics as their authoritarianism has entered places of work, where migrants have been intimidated and harassed. This new low in our sorry history of xenophobia should come as no surprise. Politicians and political parties across the spectrum have embraced the politics of xenophobia in South Africa and globally.

The impunity with which Julius Malema and the EFF carried out their theatrics will embolden those who already blame migrants for their suffering in a country where the expanded unemployment rate is nearly 50% and youth unemployment has almost hit 75%. Vigilante groups willing to mete out the violence politicians hint at have been springing up all over the country.

While these EFF harassed migrant workers in malls, vigilante group Operation Dudula took to the streets of Soweto, confiscating street traders’ goods and evicting them from the taxi rank across from Chris Hani Baragwanath hospital. The group then released a letter telling migrants in low-skilled jobs and working as hawkers and artisans to stop trading by 7 February. The letter blames them for “disturbing our development” and warns: “Be cooperative or face our actions.”

One of Operation Dudula’s leaders, Nhlanhla Lux, rose to prominence last year during the July riots when he vowed to protect Maponya Mall from looters, saying he was willing to die to protect it.

About a month before this, Lux, dressed in camouflage, was at the forefront of Operation Dudula as it marched through the streets of Soweto on the 45th anniversary of the 16 June 1976 uprising. That day, Lux insisted he and the vigilante group were not against migrants, but they chanted xenophobic slogans and evicted a group of migrants living in an abandoned building.

A few weeks before Operation Dudula’s most recent display of fascism in Soweto, Lux posted a video on his Instagram page, again wearing his military uniform. In it he accused “illegal foreigners” of arming themselves in preparation for some kind of retaliation. He said that though migrants had “an agreement with government” and had bribed political leaders and police officers, the group had no such agreement. “We are the people of South Africa … We are here with no spirit of negotiating anything. We are here to take back our country and that’s it.” He added that he and those around him were willing to “die for this country” to rid it of “the illegal foreigners who continue to participate in crime”.

Lux’s obsession with “legal” and “illegal” migrants is worth examining as xenophobes often use this definition to justify incitement. Instead of addressing the failure of the Department of Home Affairs to ensure all asylum seekers, refugees and migrants access proper documentation timeously, Lux turns the spin of the roulette wheel that determines who has been lucky enough to make it through the system and who has not into a crude morality play. Unscrupulous politicians such as ActionSA’s Herman Mashaba, the Patriotic Alliance’s Gayton McKenzie and the ANC’s Aaron Motsoaledi have all used this tactic to dress their chauvinism in the language of legality.

Motsoaledi’s cynicism is particularly galling. As minister of home affairs he made it impossible for asylum seekers to apply for asylum or renew their permits for nearly two years because of lockdown restrictions. Only in recent months has the department made online renewals available – but many asylum seekers still struggle to renew their permits.

Lux’s use of the word “cleaning” is insidious and pointed. Using this kind of dehumanising language makes it easier for ordinary people to forget the human behind the missing paperwork.  Presenting a  target group of people as diseased, as vermin or as insects is a classic facist tactic and has been a precursor to forms of “ethnic cleansing”, from the Holocaust to the Rwandan genocide.

It was arguably during Mashaba’s terms as Johannesburg mayor that the politics of xenophobia became normalised at a national political level in South Africa. Mashaba famously staged a citizen’s arrest of a street trader pushing a trolley full of cow heads in Johannesburg in 2018.

Following the arrest, Mashaba, descending into facist language, tweeted: “We are [not] going to sit back and allow people like you to bring us Ebolas in the name of small business. Health of our people first. Our health facilities are already stretched to the limit.” Like so many of the other claims he made as mayor, the tweet was farcically devoid of fact.

But facts are not something with which Mashaba seems too concerned. During early campaigning for his new party, ActionSA, Mashaba tweeted that there were “15 million undocumented foreigners in South Africa, occupying jobs that can be done by our own people”. This was a misreading of the data, which stated that 15 million people did not have identity documents, referring to both citizens and residents. Statistics South Africa estimates there are 3.9 million “foreign-born people living in South Africa”, while the United Nations population division puts it at 4.2 million.

The DA was one of the few parties to speak out against the EFF’s recent intimidation of restauarant workers, with the spokesperson for labour, Michael Cardo, labelling it “workplace terrorism”.

Yet, during the last national elections, the DA used a Trumpian “secure our borders” campaign. A focus on securing borders and keeping “illegal immigrants” out of the country echoes the call for longer, higher walls from most populist and authoritarian governments across the globe. This despite migration experts warning that walls and fences do not keep migrants out; they only endanger the lives of people already at risk.

Instead of dealing with corruption and the inefficiencies at home affairs to process and issue asylum and refugee permits, politicians have scapegoated impoverished Black migrants, turning them into targets for hostile groups.

There is undoubtably a link between the increased use of xenophobic language and stereotypes by politicians and the organised vigilante groups taking to the streets, threatening and intimidating migrants. Operation Dudula is just the latest in a string of such groups.

The Sisonke People’s Forum was one of the groups behind the 2019 xenophobic attacks in Johannesburg, in which at least 10 people were killed. The forum said it was angered by young people losing their lives to the drugs migrants allegedly sold them, and because migrants were given preference for certain jobs ahead of South Africans.

The All Truck Drivers Foundation (ADTF) has made similar claims. Despite them denying any involvement in violence, links have been made between the ADTF and the more than 200 truck drivers who have been killed in attacks on the freight industry in South Africa.

Even before the pandemic, organised groups marched on homes in Johannesburg’s Alexandra township and the suburb of Orange Grove, harassing, attacking and evicting migrants from their homes.

None of these groups has been brought to book, with few perpetrators of xenophobic violence arrested and convicted over the years. In fact, law enforcement agencies such as the Johannesburg Metro Police Department have been actively complicit in further marginalising migrants with its Buya Mthetho campaign. Launched ostensibly to “create safe communities for our residents” in the inner city, the campaign mostly victimised migrants. The metro police tweeted a picture of two officers arresting an undocumented person on 25 January. A devil emoji was placed over the migrant’s face.

As long as law enforcement acts callously and politicians continue to make dangerous statements for their own ends, vigilante groups will become more emboldened. Worse, more of them will pop up, either as a misguided response to an all too urgent social crisis or out of an entirely cynical opportunism.

The African Union at 20: a lot has been achieved despite many flaws