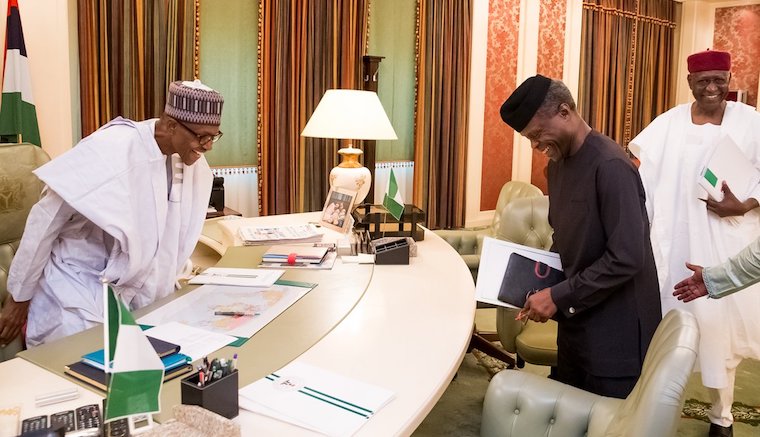 When the Action Congress of Nigeria and the Congress for Progressive Change, two Nigerian political parties, bandied together to form the All Progressive Congress (APC) to present Muhammadu Buhari as a presidential candidate, many wondered who would be his running mate. There were speculations that Lagos’s former governor Raji Fashola would fill the post. His governance in Lagos had given him a popularity across the west African country.

Bola Ahmed Tinubu, whose godfatherism in Lagos turned the state to a patronage system, presented a relatively unknown man in the political sphere. It was a well thought out move that made Nigerians start researching who this man was: a former Attorney General and Commissioner for Justice in Lagos State, a pastor at the Redeemed Christian Church of God (RCCG), arguably the largest church in Nigeria, and a professor of law (at the University of Lagos) whose oratory skills perhaps paled against that of former US President Barack Obama but stood excellent in Nigeria. His name was Oluyemi ‘Yemi’ Oluleke Osinbajo. Nigerians were ecstatic and praised the Machiavellian genius of Tinubu.

On the campaign trail, Nigerians got to meet their incoming VP. He cut across an image of a thinker who constantly held a pen to his mouth, pondering on what next to say or do. His dressing was not the regular babariga Nigerian politicians wore, it was more Awolowoesque, one of the constant figures in south west Nigeria who the politicians of the region emulate to deceive the public. The town hall meetings Osinbajo attended gave the feel that this new political party was ready to engage with Nigerians on the grassroots. Nigerians were too elated with this new VP material who sat down with school children in public schools waiting for food,  promoting part of the “Roadmap to a New Nigeria” plan he helped to write for the APC. The document which had a welfarist slant with provision for free education, free healthcare, and justice reform, capitalised on the frustration of Nigerians with the People’s Democratic Party who had ruled the country since 1999. Osinbajo was the salesboy and marketer of the “Roadmap to a New Nigeria.” His dynamism led many youths to support APC and vote out Goodluck Ebele Jonathan. What started as a sales role for the APC has continued as a public relations role for the Buhari- Osinbajo led government.

Read: Young Nigerians rise up to demand a different kind of freedom

Since 2015, when APC was voted into power, many eyes were on Osinbajo. His role under the government had shifted from explaining economics and policies, to that of a helpless official who only showed up where crisis occurred. He seemed to play the role of the government’s pacifier to the nation. For every disaster that happened in the country, Osinbajo’s face was there to offer condolences and brief the president, followed by photo. On social media, there were more apologies. The question people asked and and is still being asked is this, why not resign? The legacy Osinbajo is charting for himself in the mind of the public could be difficult to repair. How does a professor of law, a pastor, not see the contradiction of his presence in a government that has clearly failed to live to its promises? Osinbajo’s role of placating young Nigerians quickly became visible when promises after promises to handle issues were followed with absolute inaction and silence.

Mishandling of the #EndSARS protests

The #EndSARS protests have further brought Osinbajo’s leadership skills under scrutiny. President Buhari, everyone agrees, is incompetent. Osinbajo, on whom many expected a level of integrity,  wielded that expectation to lower the anger of many young Nigerians. But the #EndSARS protests are a protest of accumulated anger that demands action, accountability and transparency. Being part of Buhari’s government is the exact opposite of what these protests are expected to fulfil.

When they are still in power, many politicians don’t place much value of their legacy after politics. How their actions or inactions fuel violence, incompetence and contribute to the daily destruction of the country seem not to bother those in power. In Osinbajo’s case, his credibility has been affected by his constant role of playing government apologist. If anything, what Nigerians will miss when this government is voted out is the well curated pictures that tell a story of incompetence, irresponsibility and inaction. Osinbajo’s more painful legacy will be that he served under a two time dictator and had no integrity to leave before the bell tolled.

#EndSARS: Nigerian youths are reopening the files of violence in the country