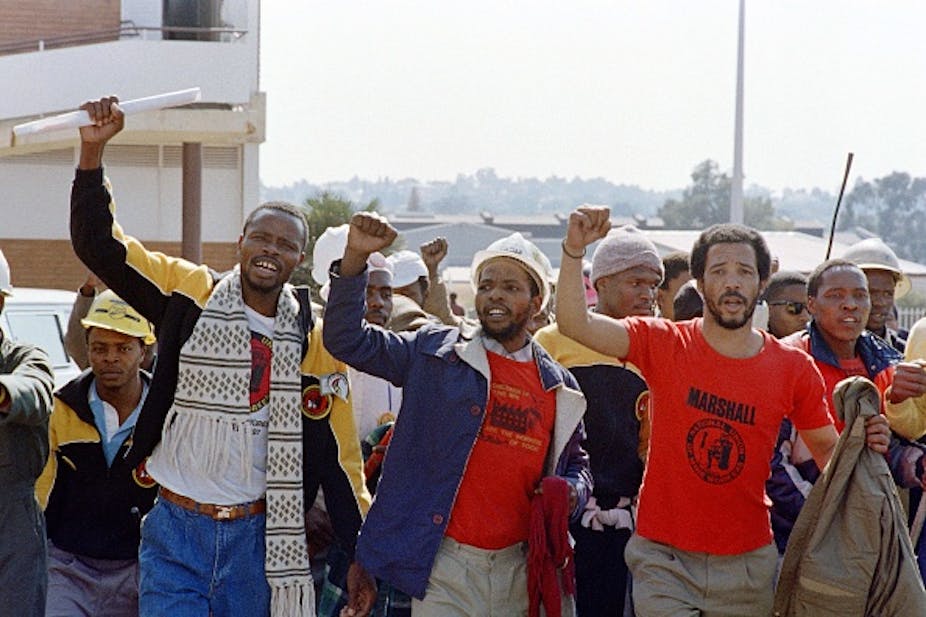 Struggle songs, also known as protest music or liberation songs, are defined as “expressions of discontent or dissent” used by politically disenfranchised protesters to influence political conversations and express emotions.

Some scholars argue that these songs date back to ancient biblical times when the Israelites were enslaved in Egypt and “the Hebrew people sang their lamentations”.

In the American context, researchers contend that protest music can be traced back to transatlantic slaves. But others note that the use of these songs goes back even further.

In modern Africa and in other colonised contexts, such as Latin America, protest music was an important tool used by oppressed peoples in their quests to overthrow oppressive regimes.

In South Africa, struggle songs were critical in the strategies used to depose the oppressive race-based apartheid state. They became effective instruments of confrontation used by the black majority against the white oppressors.

They were also used as a means of keeping alive the memory of political icons who had been killed, like Steve Biko, Chris Hani, and Solomon Mahlangu.

At the same time they helped ensure that those resistance leaders who were imprisoned, like Nelson Mandela, or exiled, like Oliver Tambo, were not forgotten. These people, the dead and the living, represented the country’s political struggle.

The songs were also a way of marking moments of grief, of which there were many, and the occasional moments of hope, as black South Africans looked forward to the apartheid regime’s demise.

As a researcher whose work looks at the intersection of rhetoric, language and media, I have examined the appeal of struggle music as an persuasive means of engaging in political communication in the South African context.

These texts are relevant even in the post apartheid context because they continue to be an important way in which people deliberate on issues.

Even though the lyrics are relatively simple, and the music can be viewed as straightforward and repetitive, the depth of the ideas they capture makes a case for reading texts like struggle songs at a level much more profound than what they literally denote.

Different styles of music characterised different periods in South Africa’s struggle for liberation. The change in political and social conditions did not just prompt a change in the lyrics of the songs; it called for a change in the form to capture the tone of the times.

From the late 1800s into the early 1900s, the strong influence of missionaries on black South African literary culture influenced the tone and lyrics of protest music. It resulted in struggle songs that were characterised by a hymn-like sound. This was in the context of a shared Christian belief system.

For example, Biblical and ancient studies scholar, J. Gertrud Tönsing (2017) talks about how the emphasis of prayer as a tool against the apartheid regime was rooted in the missionary influence. This, in turn, influenced the lyrics and melodies of the struggle songs that emerged so that they featured rhythmically static music and words written like prayers.

From the 1940s and 1950s the violence against black South Africans was written into law through the passing of the Group Areas Act and “pass laws”. These restricted the movement of black people in certain areas.

This merger of musical elements was indicative of the cultural diversity that characterised the townships. Music historian Lara Allen argues that the music found resonance and gained popularity because the sound expressed a “locally rooted identity”.

Another feature of the struggle songs from this era was the topical subject matter. Lyrics spoke to current events as they affected black people – kind of “singing the news”. As Allen puts it:

In this regard vocal jive enjoyed an advantage … in that lyrics, through reference to current events and issues of common concern, enabled listeners to recognize their own interests and experiences more concretely.

The 1960s marked an intensification of the apartheid government’s heavy-handedness on any form of protest and resistance. On 21 March 1960, the Sharpeville massacre occurred, where 69 people were killed while staging a protest against pass laws. In response, the struggle approach changed from a non-violent to an armed struggle with the establishment of the militant wing of the African National Congress, uMkhonto we Sizwe.

Some of the songs from this period were simply chants. Nevertheless, they were still musical in the way in which they used the beat and other vocal sound effects to evoke emotions. They were often accompanied by the toyi-toyi, a high-stepping ‘dance’ that Allen describes as a march that mimicked the movement of soldiers in training

As musicologist and expert in struggle music Michela Vershbow describes them:

The power of this chant builds in intensity as it progresses, and the enormity of the sounds that erupt from the hundreds, sometimes thousands of participants was often used to intimidate government troops.

In a post-apartheid world

In the late 1980s academic and expert on Latin American revolutionary songs Robert Pring-Mill wrote about how songs that featured prominently in many oppressive cultures retained their power and currency over time.

This is true in South Africa too where songs from the struggle continue to hold an established place as part of South Africa’s political communication heritage. Examples include songs of lament, like Senzeni na? which bemoans the unjust treatment of marginalised South Africans. Another is the more confrontational Ndodemnyama we Verwoerd!, which was written by Vuyisile Mini and sung by him and his compatriots while walking to their death in the apartheid gallows.

Pring-Mill argues that struggle songs endure because they reflect historical

events recorded passionately rather than with dispassionate objectivity, yet the passion is not so much that of an individual singer’s personal response, but rather that of a collective interpretation of events from a particular ‘committed’ standpoint.

It’s noteworthy that in recent years, some of these songs are now said to be hate speech. There have even been calls to ban them from being sung.

Poverty doesn’t fall from the sky – it is manufactured: A Conversation with Muhammad Lamin and Coumba Toure