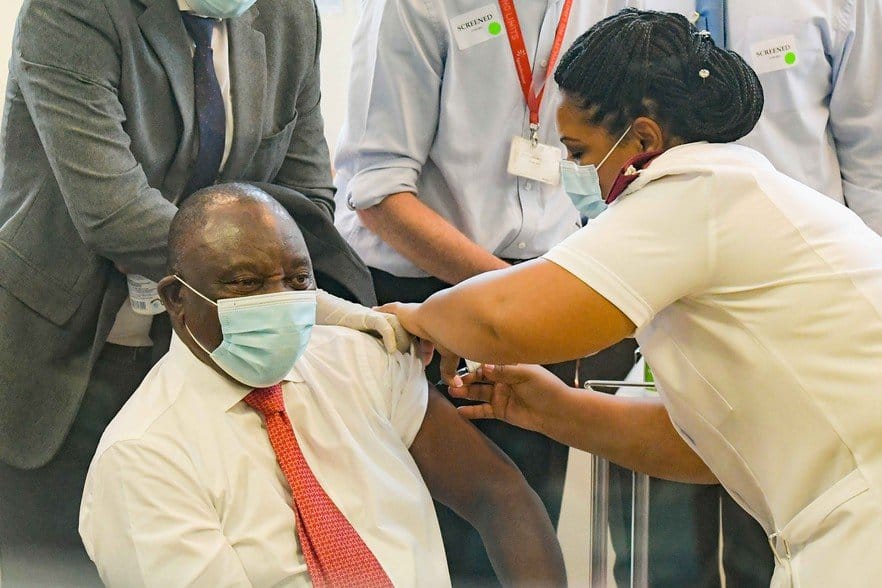 The vaccine rollout has finally started but far too slowly. The graph below shows the huge gap between the vaccines available in South Africa (the solid line), the cumulative number of vaccinations (the columns) and the number of reported new cases (the dotted line).

The graph does not include the additional Johnson and Johnson (J&J) vaccines which may be released imminently. If we included them in the graph, the gap between available vaccines and vaccinations would be even larger.

The original vaccination plan launched on 5 February was replete with maps and flow diagrams. It said there would be a phased roll out starting with health workers, and then open up to include those with co-morbidities, frontline workers (such as teachers and police) and the elderly. The slick document gave the impression that government planners were on top of things and the prospect of vaccinating the country seemed real.

Four days earlier, on 1 February, the first million doses of the AstraZeneca vaccine had arrived so things looked ready to roll. Yet the rollout was halted before it had even started because in March, a study of young trial participants showed that the vaccine was possibly ineffective in preventing new infections from the B.1.351 variant (the so-called ‘South African variant’) of Covid-19.

Yet as doctors pointed out, including the lead author of the study, Shabir Madhi, the AstraZeneca vaccine (like other approved Covid-19 vaccines) offers protection against serious illness because vaccine-induced CD8 (natural killer) cell responses are largely unaffected by the various mutations. They suggested the vaccine should at least be offered to high-risk people. The government ignored this advice and sold its stock of AstraZeneca vaccines to the African Union. (We now also know that the AstraZeneca vaccine is effective against the B.1.617.2 and B.1.1.7 variants identified in India and the UK respectively, and which are now also circulating in South Africa.)

The first phase of South Africa’s rollout was rescued only through the efforts of Glenda Gray (the head of the South African Medical Research Council) to secure surplus Johnson and Johnson vaccines from trials in the US and Europe. She, Linda-Gail Bekker (University of Cape Town) and their team displayed a can-do attitude with flexibility to vaccinate almost 500,000 health workers in their ‘Sisonke trial’. President Ramaphosa and Health Minister Mkhize were amongst the first to be vaccinated.

The second phase, now fully in the hands of the government, is offering Pfizer vaccines to those over 60. For some people, this has gone smoothly. Those able to use the online system, and with the means of transporting themselves to the allocated vaccine site, have been vaccinated and have received appointments for their second jab.

Yet even those with transport have found themselves having to drive long distances (in one reported case requiring a five-hour drive to make an appointment time announced only that morning). Those without transport, or who did not know where their allocated vaccination site was located, no doubt missed appointments. The elderly in rural areas are particularly at risk of being left out of the rollout.

The government rollout is now aimed only at the elderly – which poses a serious constraint for those health workers yet to register. The government’s EVDS online registration system functions as an implacable fire-wall: anyone under 60 trying to register is confronted with the following statement: “Please note that registration for vaccination is currently only open for those that are 60 years and older. Those under 60 years of age will be invited to register at a future date.”

During the Sisonke trial, the online system accepted registrations from the elderly and from health care workers. Yet apparently because of complaints about the system allowing people who were not health care workers to register, this facility was removed soon after the government rollout began. This is absurd. The previous system required health care workers to provide details about their medical practice or to agree to bring a letter confirming their status as health workers to the vaccination facility. It was then up to the vaccination site to accept or decline supporting letters. If the system needs tightening to prevent abuse, this should occur at the sites. To alter the registration system to prevent potential abuse is like bombing a hospital to get rid of some roof rats.

The Sisonke trial fell behind schedule when the government paused vaccinations in April after six people out of 6.6 million vaccinated in the US had developed rare blood clots. This raised the spectre of wasted vaccines just as the pace of new Covid-19 infections was picking up again. When it was lifted, the Sisonke team redoubled their efforts, ensuring that most of the J&J vaccines were indeed used. This prompted calls to widen access to vaccines to ensure that South Africa’s vaccine stocks are used. Some people, nevertheless, objected on ethical grounds and government officials promised to investigate to prevent such ‘queue jumping’. The government’s subsequent ‘fix’ to the online system took a hammer to this nut of a problem, blocking access to registration for the approximately 700,000 health workers who – according to the government’s own rollout plan estimates – had not yet been vaccinated.

Defenders of the government rollout argue that the slow start was necessary to check the systems. Yet why was the slick vaccination plan not acted on earlier? Why was the online system not designed or adapted to accommodate health workers, the elderly, those with co-morbidities and essential workers?

The online registration system is being used to match appointments to vaccine supply at every site – supposedly to avoid long queues and sites running out of vaccines. Yet there have been no reports of sites running out of vaccines – even those flexible enough to allow ‘walk-ins’ (those without appointments) and which have accordingly attracted high volumes of people over 60 wanting to be vaccinated. These sites are probably driving the rapid increase in vaccinations over the past few days. Those sites sticking rigidly to the appointment system are a drag on the rollout.

The Pfizer vaccine is now coming into the country regularly and it is obvious from the graph that the domestic supply of vaccine is growing faster than the pace of vaccination. A government official recently argued that supply is delayed to some extent by additional regulatory checks, though the Sisonke trial shows that vaccines can quickly move from the airport into people’s arms where there is commitment and political will to do so.

It is time for the government to relax its grip on the rollout and allow more flexibility in the system. As Geffen and Low have argued, the Pfizer vaccine should be offered to those with suitable deep refrigeration (all tertiary and private hospitals, and many GPs). People should be able to get a vaccination anywhere without a prior appointment (as is happening already in facilities allowing walk-ins). All that is needed to keep tabs on the roll out is contact details and a recording system that matches which vaccine dose was provided to which individual (and this can be entered after the fact).

The J&J single-jab vaccine is relatively easy to administer and only requires normal refrigeration. Aspen Pharmacare, which has a contract with J&J to compound, fill and finish its vaccine, could soon release at least a million additional doses (currently on hold due to a production glitch at the US manufacturing firm that supplied the vaccine stock to Aspen Pharmacare) into South Africa’s vaccine supply. These jabs could easily be distributed to rural clinics, to pharmacies etc, where they could be offered to those wanting to be vaccinated.

This is what we need to boost the vaccination program and to ensure that shots in arms catch up with the rapid growth in vaccine supply. With new infections rising fast, we need to redouble the effort to vaccinate as many people as possible. Poorly functioning and overly controlling bureaucratic systems must not stand in the way of saving lives.

Nattrass and Seekings are both professors at UCT.

| By Nicoli Nattrass and Jeremy Seekings

Views expressed are not necessarily GroundUp’s.

This article first appeared on GroundUp.
Related Topics:Corona VirusCovid19South Africa
Up Next