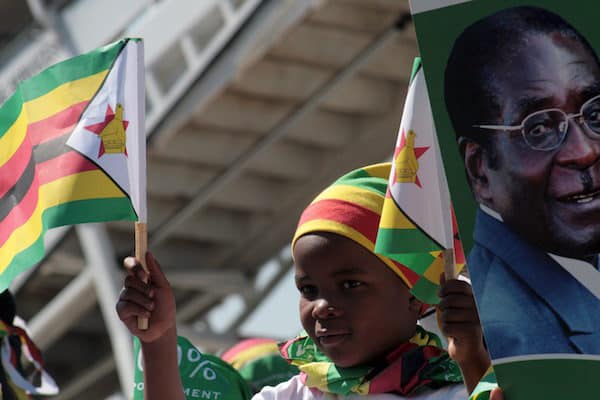 Zimbabwe’s Ministry of Justice and Legal Affairs has warned citizens from producing, selling or using the national flag without official permission and bringing the flag “into disrepute”.

According to the statement, offenders who sell the flag, or bring this flag “into disrepute” will be jailed for up to six months or fined $200 or both such fine and imprisonment.

The move to curtail the production and free usage of the national flag follows a series of protests in which Zimbabweans used the flag as a symbol of resistance, protest and solidarity.  Evan Mawarire, a pastor, frustrated with the economic woes started #ThisFlag, a social media campaign, encouraging citizens to speak on poor governance, the ailing economy corruption and poverty in the country.

There have been contestations over the use of the national flag, with Jonathan Moyo, a government minister, also starting #OurFlag, a counter campaign, in support of the country’s President, Robert Mugabe.

The Flag of Zimbabwe Act (as amended) came into effect on 18 April 1980. So the law is not new at all! pic.twitter.com/NQsIpApnrS

Observers say the ban is unconstitutional and infringes on citizens’ right to express their collective identity. Constitutional law expert, Alex Magaisa wrote: “The national flag is a national institution to which citizens claim collective ownership and express their identity, collectively and individually. The national flag is an expression of identity and any regulation of restriction of its usage affects the expression of the citizens’ identity”.

Social media users have been also been vocal against the move to restrict the usage of the national flag.

If illegal to publicly wear the flag perhaps we should put official portrait on inside of our underwear. Now that's a smear campaign

Do Zimbabweans realise that ZBC, Herald & Sunday Mail all belong to us?
Don't just reclaim the flag.
Come for *everything*
by @joeblackzw

So #ThisFlag is now a black market commodity…

Is Zambia’s president ready to heal a divided nation through his choice of Cabinet Ministers?