How I made an Ebola rapid detector test: an interview with Dr. Misaki Wayengera, Part I 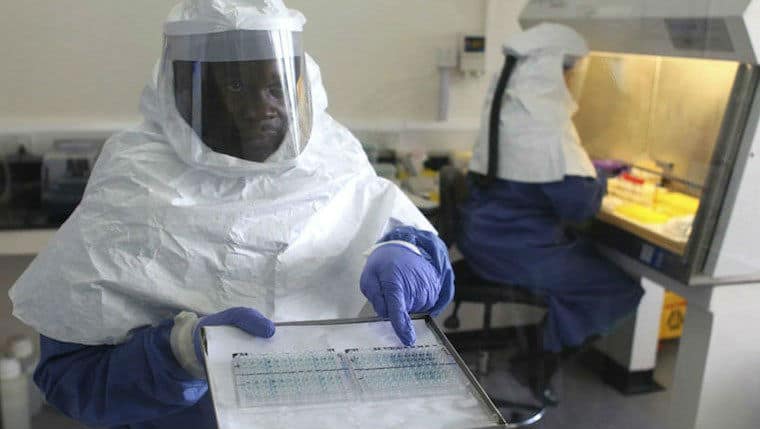 Dr. Wayengera works in the Genetics and Genomics unit, a division in the Department of Pathology at the Makerere University’s College of Health Sciences. He went to secondary school education in Mbale, eastern Uganda, before enrolling at Makerere University for a Bachelor of Medicine and Human Surgery degree. He proceeded to study Bioentrepreneurship in Toronto, Canada, after which he started on his PhD studies in Pathogenomics.

He burst onto the scene in 2012 with cutting edge research on a model that can potentially cure HIV/AIDS. In 2013, he was awarded $100,000 by Grand Challenges Canada to develop  a paper-strip test, similar to the one used in pregnancy, but for the deadly Ebola and Marburg viruses. It is this revolutionary test kit that we talked about with Misaki.

Bwesigye Bwa Mwesigire: Would you describe your achievement as a miracle, or is it actually a commonplace matter at Makerere? I mean, you have invented something that even the so-called advanced ‘West’ is yet to invent.

Misaki Wayengera: Well, I guess, as Louis Pasteur observed: “chance favours the prepared mind”. What you and the rest of the world are witnessing now is really the result of long years of tenacious work towards the same, cross-pollination of ideas from some really wonderful mentors and colleagues, and, as you will see, visionary partnerships with funders. There are a lot of young people at Makerere and many African Universities with great intellectual and creative potential, but perhaps the nature of my drive, training and exposure is what distinguishes me from the rest.

While some young people will look at problems in their field and not be bothered, my mind doesn’t settle with the status-quo. I will stay awake long [into the] night pondering the problem, and then [i will] sleep on the problem, and that explains how I arrive at my “aha” insights: the overloaded sub-conscious.

And when the idea of how to tackle the problem lands in my brain, I will spend long hours designing and undertaking experiments to test the same (the scientific method). So the difference from others is that the teaching from nursery school to university does not equip the African scholar to “attack the problem”. That needs to change—most importantly at the university.

Both the faculty and their students must not only aspire to solve African and global challenges alike, but the necessary environment to enable this needs to be built within the local environments. For example, the laboratories I use in the College of Health Sciences were a result of the vision of one man, Prof. Moses Lutaakome Joloba, the head of the Microbiology department at Makerere. There is a sense in which I can not therefore undermine African institutions like Makerere University, for there, too, are giants like “Hooke” on whose shoulders a reflection of “my-Newton” stood. [Hooke was the less acknowledged colleague of Isaac Newton who made the latter’s star shine brighter.]

Many scientists are uncomfortable with the word “miracle” for it carries with it a strong spiritual connotation, and spiritual matters cannot be explained by our current paradigms of science. But there are days I almost lost the dream (like when, after my Bioentrepreneurship training, Prof. Peter Singer at the University of Toronto called me to his office, and asked me what it is I thought I was going to do in Uganda; or when Makerere University took over a year to offer me official employment); but then, somehow, I got the strength to carry on. It’s impossible to say this was mere chance; it’s like some invisible guardian was watching over me to help me make the right decisions; meet the right people and/or do the right thing. I guess, whichever reality you wish to attribute to that invisible force in a way defines your spiritual standing.

Regarding me doing things the West hasn’t contemplated; sooner rather than later, the West would have found these and possibly more striking solutions (they have built the necessary capacity and are willing to invest). I was lucky, as I was among one of the first people trained in genomics and bioinformatics in 2006 and [who] sought to apply the knowledge to native African problems of infection. But as any informed person will tell you, the West is already on [to] so many things now that African scholars know nothing about and you should never underestimate their potential and long-time resilience.

How long did it take you to come up with a rapid Ebola detector?

Sometimes you can never really designate a specific time when “work on something started”, and that is the funny side of things with innovations. I have worked on Ebola since 2000, when after the outbreak in Gulu and Masindi districts of Uganda, it puzzled me where these viruses came from. Then, we came up with what I then termed the “evolutionary adaptation hypothesis to explain the origins of filoviruses (sections of which are now published as the general theory for the origin of retroviruses)”. To follow through, I proposed to the CDC-Uganda to undertake a sero-survey among animals (monkeys specifically) for these filoviruses. I still have a copy of the letter that Dr. Robert Downing, then CDC Laboratory director, wrote to me (it’s funny but when in 2013 we got funding for the Ebola rapid diagnostic test (RDT) Dr. Downing was among the people that reassured the UVRI directorate that I could pull this off and should be given access to Ebola human samples).

We never got funds to carry out such a survey for the reservoir of Ebola and Marburg but the challenges I came across are what illuminated my mind about the need for a simple, easy to use test that could be used at the point of care with no laboratory set-up. Such a test was needed to control viral hemorrhagic fever outbreaks (VHF) too. Anyway, the identification of the epitopes for developing the RDT was done between 2006 and 2007. In 2006, while trying to identify bacteria enzymes that cut-up HIV-1 DNA for my Bioentrepreneurship work at the Medical and Related Sciences (MaRS) discovery district at the University of Toronto Health Network (UHN), Ms. Nina Chagnon, my supervisor, pushed me to exploit the industrial networks in North America. When I went back, I landed on Promega Incorp., Philadephia, USA and sent them an email. It was the Director of Product and Business Development at Promega, Dr. Gary L. Madsen, who introduced me to Bioinformatics through the tool Web-cutter.

The active virus had been detected to remain in semen for up to 82 days. Photo: Thinkstock

I had a tour-de-force of genome databanks, looking for HIV-1 DNA sequences (already present in the HIV sequence database); and it was not long before we identified these (see publication in African Journal of Biotechnology, 2007). When I was finished with this work, I went on to work with filovirus genomes, Mycobacterium tuberculosis genomes (the antidotes to TB rapid diagnostics), and malaria-vector genomes (see work on Mosquito retroposons–published). In fact, I tried several times to publish the targets of the filovirus biomaker in several journals as preliminary data to drive future work, but was let down (there you go; the peer review system might not be all that fool proof after all). In 2009, we applied to the US National Institutes of Health (NIH) “Partnerships for Biodefense” but the application was withdrawn by the Applicant Organizational Representative (who possibly questioned our capabilities to deal with Ebola and Marburg).

A year earlier, we had written to the Ugandan head of state with a proposal to build capacity for bio-defense, and there was not a response then (the response finally came through in December 2009 promising us support that never came until Grand Challenges offered). It’s the latter experiences that make me really appreciate the seed funding from the government of Canada through Grand Challenges Canada’s Rising Stars in Global Health Program. In fact, it’s not so much the Transition to Scale funding of CAN$1.5 million that make me grateful to Grand Challenges Canada (since that seemed responsive to the devastating West African outbreak; much as it depended on our preparedness through the good preliminary data we had generated); but rather the first seed money without which we would never have generated data to support our discovery.

If you consider the funding challenges in today’s world – in which less than 1% of scientists ever get the funding they need – you will appreciate why this decision was key and visionary too, in light of the devastation wrought by Ebola in West Africa and beyond. Anyway, to answer your question, we have been on this for over 15 years to be precise.

How does the Ebola RDT work?

Well, we have two prototypes. The first ones detect antibodies against the filoviruses (either Ebola, Marburg or both; IgM or IgG). The second detect the surface protein of the filoviruses that is also secreted in [the] blood of infected persons. The second prototype is a definite marker of infection (since survivors or people vaccinated against the virus, may carry IgG antibodies). However, detecting IgM antibodies (which show up in the first 30 days following exposure to a bug, may be used as a correlate of acute infection). So in fact, we are talking about a combination of tests that may potentially be multiplexed in future on a single strip, but that is in future design. In applying to the PCT at WIPO, however, we cover many aspects and platforms—including related nucleic acids amplification and sequencing tests, labelled immuno-assays (LIA), proteomics, etc.

Have you thought of the various rich Africans in business, with an idea of potential commercialization of your invention?

Yes, I have. I once contacted Mr. Strive Masiyiwa (a Zimbabwe businessman resident in South Africa) and Mr. Aliko Dangote (a Nigerian billionaire), but I guess perhaps the messages have not reached them personally. As you know, these are some of the Africa’s richest entrepreneurs, and Mr. Masiyiwa was involved in mobilizing the AU to respond to the outbreak in West Africa.

Early this year, I contacted Rt. Hon. William Ruto, the Deputy President of Kenya. In fact, I have fallen short of courting Mr. Paul Kagame—the President of Rwanda; I am a secret admirer of what he is doing in Kigali. Last year, I was contacted by a lawyer claiming to represent a consortium of Ugandan business men; but his propositions were not viable and neither did they come through – shady is the appropriate word to describe them.

Now let me tell you about commercialization, particularly of biotech entities. What I did at the MaRS discovery district was exactly that, and in Sept 2007, we incorporated Restrizymes Canada Corporation. When I returned to Uganda, by March 2008, we had Incorporated Restrizymes Biotherapeutics (U) LTD as a sub-sidiary of the Canadian company. In 2005, the UN working Group on Genomics and Biotechnology highlighed the place for these subjects in the future knowledge economy. Today, a single new molecular entity (NME) intended for drug, vaccine and or diagnostic development goes for between US$600 million to US$1.2 billion. Our group is working with over 10 NMEs at various stages. My dream is to build a facility in Uganda (for about US$100 million or UGX350 billion — the figure granted to youths by the Ugandan government as loans) which we can spin off for perhaps as much as US$10 billion. That way, we can pay back the capital venturists their US$100 million with profit and pay tax of over US$1 billion, and may be build some state-of-the-art hospitals and laboratories at Uganda’s medical schools.

The question is, how many Ugandans appreciate the wealth in intellectual property as ours? You see, unless we can make some really smart things that will bring dollars into our economies, we should forget about competing with the West and balancing our budgets.