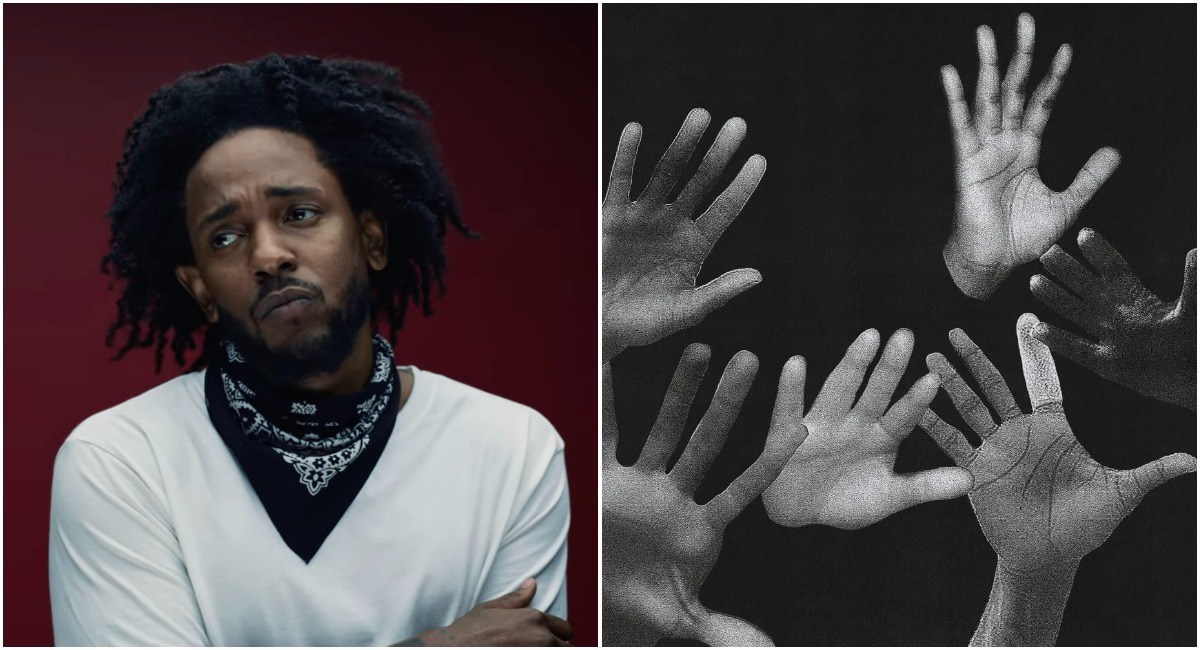 Ancient philosophers wanted to know about being. Being revealed itself to the old ones as element, spirit, presence, consciousness or enchantment, something of a mystical horizon. Being was nothing if not the first principle from which everything derived. The job of each new philosopher was to prove all his ancestors wrong, and show that they had, in fact, mistaken beings for being. To separate the signal from the noise, the new philosopher passed his life as a monk, isolated, hungry and insane.

Philosopher of black being, Kendrick Lamar, has come out of his meditative cave of five years. “The Heart” series, his customary album prelude, serves the first taste of the hunger, darkness and aggression that will layer his impending album. Known to crash studio floors in a sleeping bag and go for months without a phone, Lamar marked his return with the “The Heart Part 5”, flexing Franciscan weight goals and a Marxist mane in the intense video that has got the world talking. But that’s just about everything his philosophical project owes classical antiquity.

The image of the philosopher in the Roaring Twenties is not the ancient forest spirit who lives out of his one-string backpack. The philosophers of our time are billionaire hippies whose first principle is capitalism. Kendrick Lamar is the most commercially successful philosopher of our time, with the possible exception of Silicon Valley space adventurers and old-school rappers. And nothing less than capitalism is the conflicted field of being in black America.

Karl Marx is out of a job in black America. His last prophet, Cornel West, beats a grumpy retreat from blackface capital everywhere he turns. The culture, with its emphasis on appearance and acquisition, is not so much an ideology as it is an ontology. “Money trees is the perfect place  for shade” because money reveals itself to the disempowered not as a corrupting influence but as an organic field of being. The culture is proof of life. The culture is the accumulation of displaced being.  Young black people transcend bare life in the colours of the culture. From here, it is one step to the senseless ceremony of black death. As Lamar puts it at the beginning of “The Heart Part 5”:

I come from a generation of pain, where murder is minor

Rebellious and Margielas ’ll chip you for designer

Belt buckles and clout, overzealous if prone to violence

Songs of black being have evolved a long way from the marching songs old to shopping songs like Pop Smoke’s “Dior”. It is remarkable that nothing is spiritually lost in this exchange. Even where the matter of Black Lives is forcefully worded, as in Kendrick’s “Alright” or Childish Gambino’s “This Is America”, the existential claims of capitalism are also present and felt. Black privilege is the ultimate buffer from the violence and racism that follow expendable lives in the hood.

In May 2020, an unarmed African-American man, George Floyd, was suffocated to death by a white police officer, sparking a new wave of Black Lives Matter protests. Pop Smoke’s “Dior” stood out of the songs that soundtracked the protests. Aside the 20-year old rapper’s own martyrdom earlier that year, the most immediate connection between “Dior” and Black Lives Matter were the classic hip hop themes of police occupation and jailed homies. But “Dior”’s acquisitive concerns and fantasies of the female form are equally spiritual:

I’m up in all the stores

When it rains, it pours

As old Marxists could already see, what the political economist takes away from you in existence, he gives you back as appearance. Consumer romanticism is spiritual enough for Pop Smoke to turn around Kendrick’s boast, “How y’all let a nigger go platinum while only making conscious albums” to a commercial nigga going conscious while only summer-shopping.

In his short-lived role, Pop Smoke is an authentic prophet of his environment. Sent home for bringing a gun to school, the king of drill makes music for kids who have to “carry their guns to school because it ain’t safe.” He raps for “that kid who got beef, thinking about how, when they go to school, these people might try to kill me but I still gotta get my diploma for my mom.” Pop Smoke was killed in his family home by a group of teenage robbers. Chipped for designer in a culture “where murder is minor” in both senses of the word.

What happens to realness when keeping it real is a gesture of conditioned reality? Can hip hop philosophers know themselves outside their homely immersion in capitalism, especially since they default to it for the material proofs of black being? What are the coordinates of protest when spectacle has sucked spirit into itself? Lamar has been asking this all along. That’s why he is very mad.

For Kendrick Lamar, realness will either look away or face up to one hard question: How is realness my reality when I am the creation and caricature of a system? Creation, because the violent hood is the logical outcome of systematic white supremacy (“The Blacker the Berry”), and caricature, because a black rapper keeping it real is just the preferred selling point for a white label (“untitled, unmastered 3”). Kendrick finds that black authenticity is alienation.

On “The Blacker the Berry”, the call of “6 in the Mornin’”, the original gang-banging song, is picked up with irony as the street poet enters the desensitised killer psyche:

Six in the morn’, fire in the street

And sometimes I get off watchin’ you die in vain

Kendrick was criticised for rapping about the contradiction between black pride and black-on-black violence on his 2015 album single. But hip hop owes nothing to political correctness. “The Heart Part 5”, his prelude to the 2022 album, unapologetically revives this theme.

Another peer’s been executed

Make amends, then find a nigga with the same skin to do it

Black Death in a Time of Political Correctness

As in “The Blacker the Berry”, Kendrick has to transcend political correctness in “The Heart Part 5” to find black being. The immense last verse of “The Heart Part 5” shifts perspective from “The Black the Berry” killer to the martyr. Nipsey Hustle’s senseless death in 2019, at a time when he was trying to unite and find a way out for his people, gives the message greater urgency.

In the older song, Kendrick’s persona identifies as an African aggrieved by racism but also revels in the role of a killer that the system made. The song’s ending brings some perspective to lines he had left hanging, as he finally explains how he is “the biggest hypocrite in 2015”:

So why did I weep when Trayvon Martin was in the street,

When gangbanging make me kill a nigga blacker than me?

“The Blacker the Berry” was disapprovingly received as victim-blaming. Poor African-Americans, condemned to crime by institutional marginalisation, could do no wrong. Although he complicates his song, rapping, “You sabotage my community, makin’ a killin’/ You made me a killer,” critics charged Lamar with playing into a conservative narrative that takes attention away from state violence against black people and structural drivers of violence among black people.

Collective languages in which black victims can do no wrong are not helpful. Pan-Africanist stereotype-busters, for example, put every wrong, from xenophobia to genocide, on the doorstep of the empire. It falls to hip hop to test the limits of respectable language. This is particularly so in the time mainstream consciousness, cancel culture and political correctness.

Video for The Heart Part 5, directed and executive produced by Dave Free and Kendrick Lamar.

Described by Slavoj Zizek as postmodern authoritarianism, political correctness refers to accepted ways of speaking, usually to protect minorities. We receive political correctness as a final understanding between the privileged and the harmed, a collective wisdom in which speakers share the same language, and nod to the same trends. But one must also ask how something like collective language comes to constitute itself in the first place. And ask whether politically correct derivatives like cancel culture are not really a form of internalised white moral superiority.

What the Fuck is a Debordian Deepfake?

The lyric which honours Nipsey Hustle and doubles down Kendrick’s disgust for gang violence coincides with a scene where Kendrick deepfakes into actor Jussie Smollet. In 2019, Smollet was sentenced for fabricating a racist and homophobic attack on him. The coinciding of the lyric with his image is the least obvious gesture in “The Heart Part 5” video. Kendrick may be pairing the scenario in which Smollet hires fellow blacks, two Nigerian men, to stage a crime, against the scenario of black-on-black violence in the hood. Seen this way, the connection is still innocuous.

But there is another way to approach the deepfake. Violence against blacks is not just an existential trauma in the hood but also a fixed language of in the spectacle. The Donald Trump era, against which Smollet fabricated the hate crime against himself, is also the era in which identity politics goes mainstream. The curious contradiction here is that diversity wins universal expression at the same time that it is captured for corporate appropriation and political agreeableness. Kendrick’s use of deepfake in the first place offers itself for reconsideration.

A deepfake is a convincing personal resemblance grafted into an image, video or audio through artificial intelligence. The faceswap in videos is achieved by a form of deep learning called generative adversarial networks (gans). One algorithm, the generator, creates content modelled on source data, while a second algorithm, the discriminator, tries to identify the artificial content. The adversarial algorithms work each other into mutual self-improvement, resulting in the near-perfect reproduction of the targeted image.

We are here confronted with that sort of history model Hegel called dialectics. History is revolution opposing itself to power on one hand, and power sucking revolution into itself on the other hand. Guy Debord describes the second scenario as recuperation and the first as detournement. When power looks like revolution, revolution has already lost power.

For Debord, and The Matrix’s preferred philosopher, Jean Baudrillard, our society of the spectacle is this sort of deepfake. David Bennato unsurprisingly makes a connection between deepfakes and Baudrillard, describing deepfakes as the products of “a society hostage to simulacra and fictions, as Baudrillard predicted… a society where true and false are confused.”

Kendrick is not just using deepfake to represent different perspectives in light of his stated purpose, “I am. All of us.” His deepfakes also highlight the falsified field in which black people  must negotiate their being. A place where protest has become mainstream rather than marginal is a site of suspicion. This is a place where individuality has been cut down in favour of uniformity. Where collective languages of black being have no use for complexity and no capacity for self-criticism. This is a place where spectacle, as in Smollet’s case, comes before other considerations.

While life is still cold and alienated, post-Trump celebrity culture offers no shortage of woke idols. We are well past the conversation of hip hop overcoming conservative clapbacks and censorship to become the most listened-to genre. What goes mainstream in the Roaring Twenties is protest hip hop, so much so that Kendrick is “ducking the overnight activist” in a 2021 feature. As a Debordian deepfake, the new hip hop absorbs radical energy and safely reintroduces it back to society. Debord’s rapper is the one who reclaims black causes which have evolved into respectable truths.

#JusticeForSheila highlights the precarious lives of queer people in Kenya