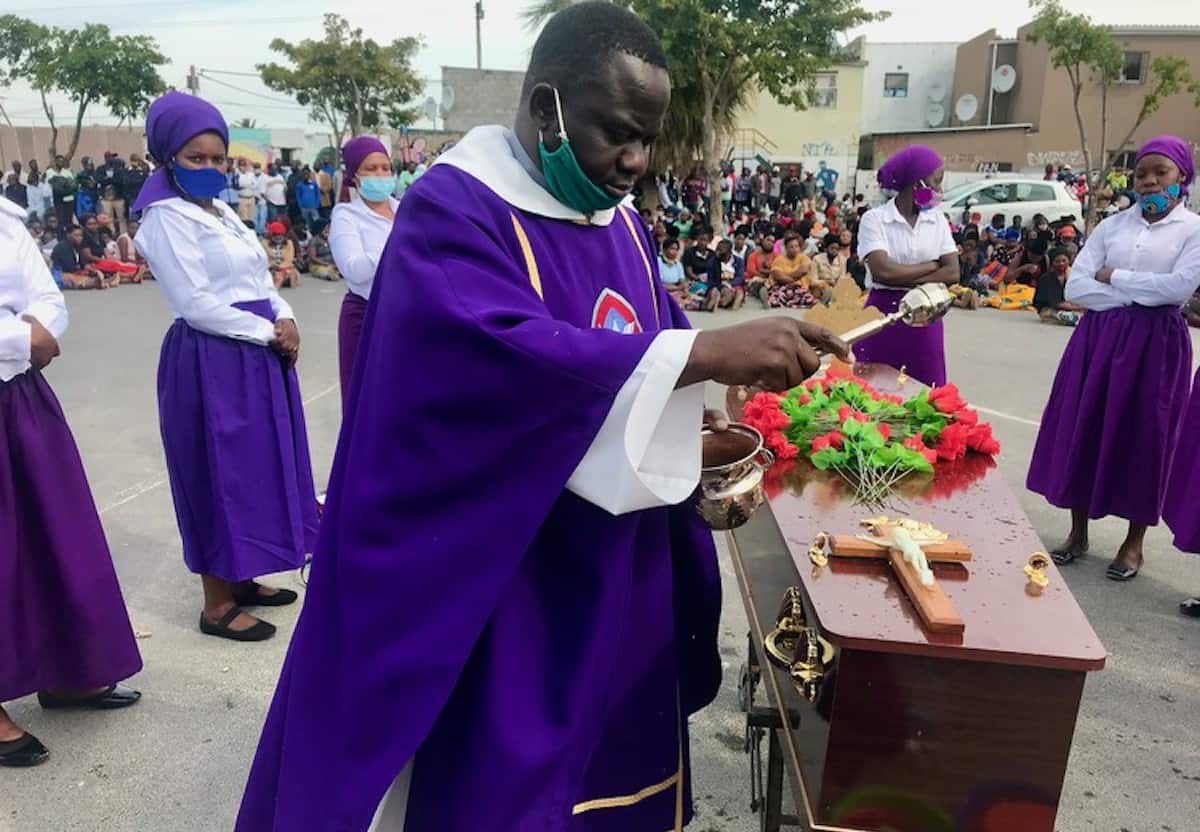 Repatriation of the dead to Malawi is costly for immigrants when loved ones die in South Africa, and since Covid-19 struck it has become more expensive and more complicated.

“‘He has to go and rest at home, Ayenera akagone kumudzi’ – these are regular words that demonstrate unity and desire to help each other I hear from Malawians during the time of loss,” says Father Kizito.

In the past, bodies could be flown back by air for R18,000 within days. But since international flights stopped it can take two weeks now by land to bring a body home and can cost up to R25,000 – too much for those undocumented Malawians who survive on domestic and gardening work.

Good embalming is also expensive, so now the minimum is done and there is no viewing of the body when the funeral is held back home.

To relieve the stress, Malawians have formed their own funeral associations. “Each township has an association,” says Father Kizito.

On Sunday, about 300 people gathered at Sophakama play park in Dunoon where Father Kizito presided over one such send-off funeral service, for 60-year-old Gonamaso Kumwenda, a carpenter, who died on 14 August in Somerset Hospital.

The men stood while women and small children sat on the ground as is customary. After the body was viewed, a choir sang and lines were formed on both sides of the road to wave farewell as the hearse took the body away.

Family spokesperson Kandawero Chirambo said Kumwenda was survived by six children and his wife, who had returned to Malawi last year.

“When a family member dies here you suffer a great shock. It is a sudden blow … Next thing you ask yourself, where will you get money to take the body back home? And to feed people who will be coming to console you?” said Chirambo.

Joel Mpochera, Secretary General of the Dunoon Funeral Association (DUFA), which facilitated the ceremony and repatriation, said the association is not a funeral parlour, but co-ordinates fund-raising. Members make contributions, and from this a fixed lump sum is paid to a bereaved family, who choose the undertakers and people they want to repatriate the body.

Not all the well-known funeral parlour companies do repatriation and their funeral schemes are more expensive and not well suited to the precarious financial lives of undocumented immigrants.

GroundUp contacted three of the biggest companies which gave figures that ranged from R30,000–R45,000. One company said they had stopped repatriation during lockdown.

Mpochera said the association had about 1,000 members. Members paid a R50 membership fee and then had to contribute R50 each time someone in the association died. This made it possible to pay R30,000 to each bereaved family, whether the family member was buried the same day in accordance with Muslim tradition, or repatriated to Malawi.

The association also offers repatriation for the sick. Sick people contribute R20 per member and are helped with R10,000 for transport to Malawi.

The association communicates through WhatsApp groups. Contributors are listed on a PDF which is sent to everyone, and members who are not up to date with contributions to other funerals do not get finance for funerals in their own families.

“When someone in the database is in arrears, when his or her family member dies we are without mercy. Last year, we distanced ourselves from about 15 funerals here in Dunoon for people who were in arrears. If you don’t instil discipline, people will never learn,” said Mpochera.

Bodies sent from Cape Town are kept in Johannesburg until there are six bodies to be repatriated, so as to save on costs. “So if the body is the first one to arrive, it has to wait for the other five bodies,” he said.

The daughters and sons of Fela in African Pop