Nigerian science fiction writer Oghenechovwe Donald Ekpeki on May 21 won the Nebula Award for his novelette, “O2 Arena.” He becomes the first African winner of the prestigious prize in the novelette category. Published in Galaxy Edge, a speculative fiction magazine, in November last year, Ekpeki’s story presents its lightspeed commons as a reduced existence merely concerned with survival, and yet there is still a place for love and empathy in this bare life.

“O2 Arena” is a biopolitical dystopia in which oxygen has become a commodity, with all the possible class implications. The self-aware narrator reflects disapprovingly on all claims to heroism. Everything, from transport to education and healthcare, is paid in oxygen units. A gladiator future where you pay for life with life, and take a life to buy back a life, is hardly an arena for heroes. Surprisingly, the mix of impossibilities in “O2 Arena,” gives emotional depth to the narrator’s relationship with a woman who is struggling with cancer.

“My climate fiction story O2 Arena a Hugo, BSFA & Nommo award finalist just made me the 1st African, Nebula winner for novelette & 1st African born – black person to win the award,” Ekpeke announced his win on Facebook. Now in their 57th edition, the Nebula Awards are run by the Science Fiction and Fantasy Writers of America. 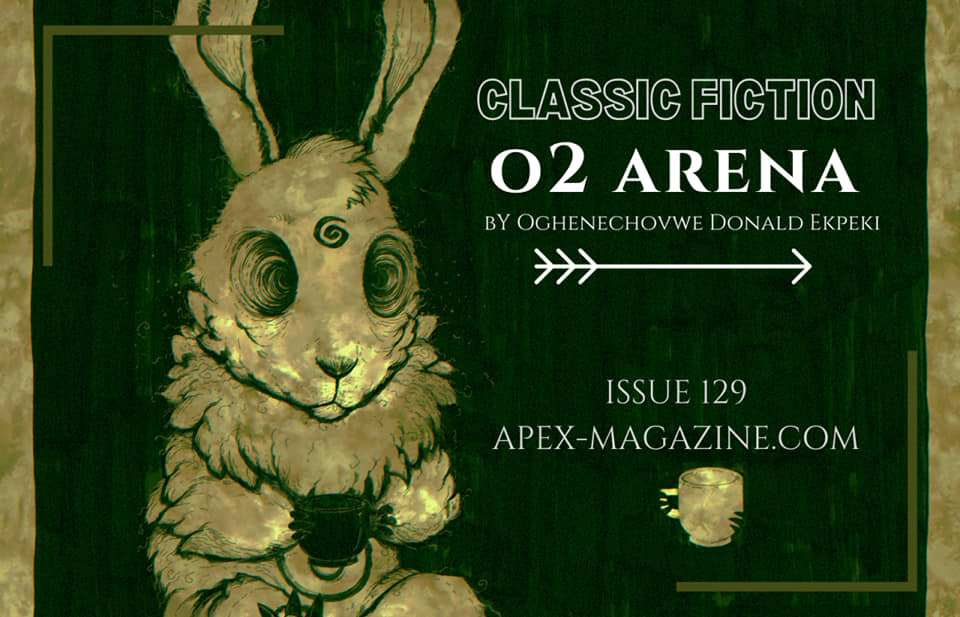 Multiple Hugo and Nebula finalist Ekpeki is in his element. This year, he is also in the run for Nommo, Hugo, Locus, Sturgeon, and British Science Fiction awards. A previous Nommo, Otherwise and British Fantasy Award winner, Ekpeki’s crowning achievement was founding the Jembefola Press and the Emeka Walter Dinjos Memorial Award for Disability in Speculative Fiction this year.

Climate change is a public health disaster in Ekpeki’s story. The futuristic scenario is sharply brought into the present, not just because of Ekpeki’s moving storytelling but also because of the story’s resonance with our double airpocalypse, losing loved ones to the corona virus and to the effects of climate change, and living with precarity as the new normal.

But Ekpeki’s focus is broader and this is important at a time when other ailments have quietly slipped out of the headlines. He dedicates his story to people struggling with cancer and other ailments, “Especially to beautiful young Nigerians who had and are still labouring under the yoke of disabilities and various health maladies in a broken system with poor to no healthcare.”

This can be, unfortunately, said of more African countries, where rulers have access to exclusive hospitals but, more reliably, fly to other countries for their healthcare needs, and never show confidence in the hospitals they run down for the poor to suffer what they must.

Ekpeki, who lives with disability and also struggles with other health conditions, further describes the Nigerian health system as one “that’s failed thoroughly and forced them to a death match in the hopeless arena of life, leaving them to struggle viciously and alone, for the very air in their lungs.”

The law academy, where the story is partly set, likely comes from Ekpeki’s days as a law student at the University of Lagos and the Nigerian Law School, Lagos campus. The dedication for “O2 Arena” includes a link to provide radiotherapy for Nigerian women dealing with cancer.