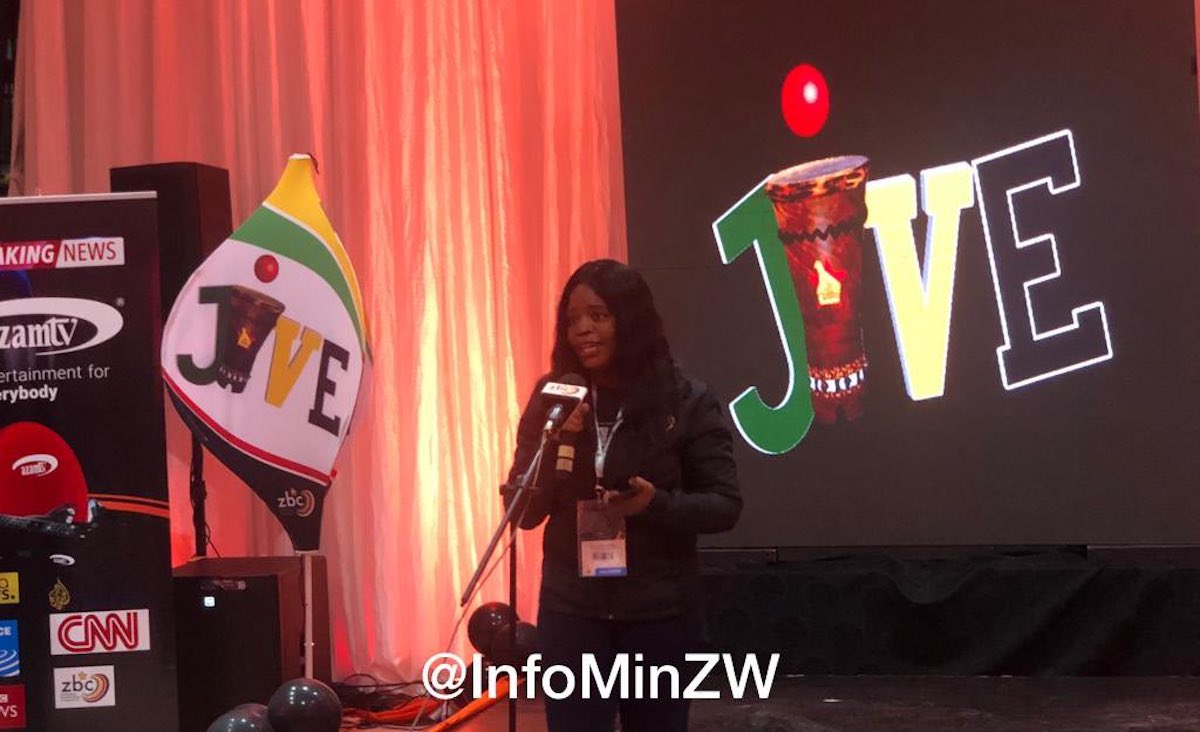 On the 27th of April, Zimbabwe Broadcasting Corporation (ZBC) launched its offshoot television station, Jive TV, on the sidelines of the Zimbabwe International Trade Fair (ZITF) in the country’s second largest city, Bulawayo. The free-to-air channel will be dedicated to music, with 60 percent Zimbabwean, 25 percent African and 15 percent foreign content. Jive TV is the second television station to go on air this year, three months after the launch of Daily News-owned 3K TV.

State-owned ZBC TV maintained a monopoly in the 42 years of Zimbabwean independence. Zanu PF’s chokehold on state media is one of the most obvious features of Zimbabwe’s illiberal political space. The impending launch of a news channel, also controlled by ZBC, is unlikely to change this position. On the other hand, 3K TV, will be joined by five more private players awarded broadcasting licenses this year, while ZBC also is expected to launch five more channels.

Opening the airwaves with one hand and throttling them with another

Speaking at the Jive TV launch, deputy minister of information, publicity and broadcasting Services, Kindness Paradza, said the current Mutsvangwa-led ministry has made the most notable strides in freeing the airwaves.  “If we are to be serious, the media landscape changed in the last three and half years or so when she (Mutsvangwa) became minister,” Paradza said.

“Television, you know, in this country was introduced around 1960 and so forth. And for 37 years or so, we only had ZBC and so forth. But she had changed all that.

But this newfound abundant media freedom referred to by Paradza speak volumes about the “New Dispensation” (President Emmerson Mnangagwa administration)’s idea democracy. Of the 12 TV licenses awarded this year, six went to ZBC and six went to private players who are all loosely connected to government or the ruling Zanu PF in one way or the other. This was the same method followed when ZBC’s radio monopoly was broken under Minister Webster Shamu during the government of national unity.

The radio space has been progressively opened to private metropolitan players, bringing aboard private players like Skyz FM in Bulawayo, Hevoi FM in Masvingo, Breeze FM in Victoria Falls and YA FM in Zvishavane. ZBC runs Khulumani FM in Bulawayo and Central … in Gweru, while Zimbabwe Newspapers runs Diamond FM in Mutare and Capitalk Radio in Harare.

Zimpapers and ZBC-run radio stations may be “private” but there is no question about who calls the shots. On 1 August 2021, nine Zimbabweans were shot dead and others injured by suspected Zimbabwe National Army soldiers. They were protesting Zimbabwe Election Commission (ZEC)’s handling of the just-ended elections. Other casualties were going about their private business in the city centre, only to be caught in the crossfire. Capitalk Radio presenter Ruvheneko Parirenyatwa opened the phone lines for witnesses to give their versions of the tragedy.

Acting president General Constantino Chiwenga called the radio stations and questioned what station manager Napoleon Nyanhi was trying to do. Parirenyatwa was sent home and Nyanhi was asked to lie low. He, too, never came back to work.

After the shooting, few demonstrations were called by opposition activists, only for major cities to wake up empty, as citizens thought twice about exposing life and limp to state machinery. The chilling effect arguably extends to state-controlled broadcasters who are not in doubt about what their instructions are.

ZBC reports of the March 26, 2022 by-elections shied away from a simple breakdown of results by name, party and number, rather headlining Zanu-PF’s urban inroads and reporting opposition parties as though they were one party. One went away from the convoluted news uniformed as ever, but the reports followed a clear pattern whereby Zanu PF rallies had been screened in full, while subsequent overall winners, Citizens’ Coalition for Change, were either ignored or savaged on the news.

Newspaper companies worried by a decreasing market share have made a run for new cheese in the coveted broadcast sector. Long in the tail, Daily News has had enough time to jump into bed with the system. Trevor Ncube admirably kept his newspapers intact and took the long spoon to the palace himself. He was not remembered.

Away from political decoys, a silver lining

Speaking at the Jive TV launch, ZBC CEO Adelaide Chipungurire appealed to government to finance content creators as they are being held back by a struggling economy and the pandemic. “Content creation is not easy, especially in Zimbabwe right now,” Chipungurire said. “So for us to create a whole entertainment channel, that’s a huge feat.”

“That is an extremely difficult thing to do in the current environment, considering that content producers are coming out of a period of Covid where nothing much was happening for almost two to three years and all of a sudden we have these new channels that are launching but our content producers are not funded,” she explained.

Away from the political decoy, Jive TV may indeed be a much-needed outlet for Zimbabwe’s extremely talented but internationally underexposed and locally underpaid musicians. One hopes the state broadcaster uses its channels in hand to go beyond music to even less appreciated art forms.

When it comes to youth expression and urban entertainment, there has always been a silver lining to the Zimbabwean’s government control and diversion programmes.

In 2002, as Zimbabwe was being savaged by foreign media over the land redistribution programme and the descent into autocracy, Mugabe’s blue-eyed son Jonathan Moyo came up with the policy of 75 percent local content. The policy gave birth to one of the golden ages of Zimbabwean music, the urban grooves era.

Roughly reigning between 2001 and 2008, the fawning hybrid of rap, dancehall and RnB was a socially innocuous genre. For millennials weaned to the sound, though, urban grooves is a breeze of nostalgia sacredly hedged with mermaid reeds.

The Chamhembe School, fronted by teen prodigies like comeback king Roki, were excused from singing politics, and left to figure out the curious puzzles of young love. Zanu PF had neither a shortage of old hands already sold to its cause nor trouble recruiting overpaid tools.

However, urban grooves owed much of its popularity to state galas, held across the country and aired on ZBC TV to shore up Zanu PF’s nationalist historiography. Many of newcomers were self-confessed beneficiaries of the 75 percent local content policy.

As urban grooves fell off, to be survived with its insistent offshoots, Afrofusion, Zimdancehall and Zim hip hop, newly formed radio commercial radio stations, Star FM and ZiFM Stereo, mapped the new soundscape. Zimdancehall came up same time as the new stations and reigned in an unbroken alliance throughout the elapsed decade.

Jive TV and its forthcoming rivals might just keep the energy with young talent, and even rescue Zimdancehall from its premature death throes.

The divine message of ‘Good News From Africa’