Meskel: The festival of daisies marks the finding of Jesus’ cross 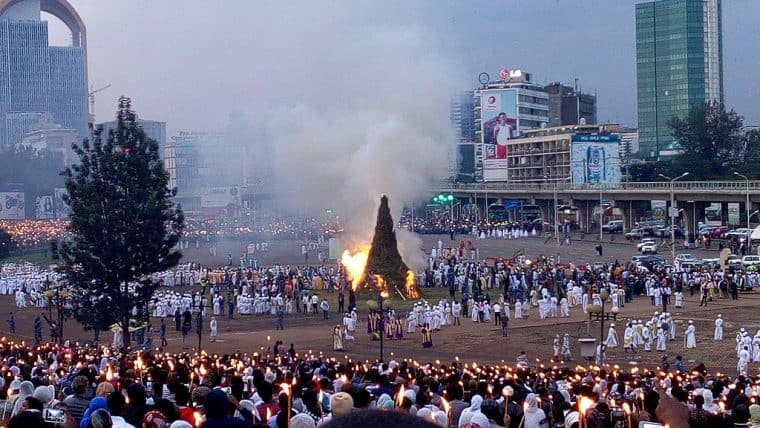 The month of September sees the celebration of both the Ethiopian New Year, known as ‘Enkutatash’, on 11 September in a normal year or 12 September in a leap year, and Meskel.

Meskel are yellow daisies whose mass blooming coincide with the celebrations. The flowers are tied to the top of branches, which are then bundled together into a ‘demera’ and set ablaze by a procession of people on the eve of the celebrations.

The festival is also traditionally held in Meskel square in Addis Ababa. In this instance the word means ‘cross’ in the liturgical Ge’ez language.

Meskel marks what the Ethiopian and Eritrean Orthodox church believe was the fourth-century discovery of the cross that Jesus was crucified on by the mother of Roman Emperor Constantine- the Great, Queen Helena. Legend has it that Queen Helena, after praying for guidance, was guided to the cross in a dream in which she was instructed to light a bonfire and follow the smoke to the cross’s location.

Read: Ethiopia and Eritrea have declared end to decades of war

This is the origin of the festival’s bonfire and procession, which is led by the head of Ethiopia’s Christian Orthodox church, Patriarch Abune Mathias. It starts on the eve of Meskel with the planting of a green tree in town squares and markets. The demera is then set ablaze while the procession circles it, singing a special Meskel song, leaving it to burn until it turns entirely to ash.

The candles are lit, the fire is burning, the fireworks are popping 🔥 . Melkam Meskel (Happy Meskel) to all #Ethiopia pic.twitter.com/XIyvCAUddY

Smaller-scale celebrations can be held by families by lighting smaller fires on streets outside their homes, before gathering to enjoy wine made from honey and the traditional meal of raw minced meat in flat, dry bread.

The revelry starts in the afternoon and ends after sunset. On the actual day of the festival, the ash from the demera is used to mark the faithful on the forehead with the sign of the cross. The occasion is made even more auspicious if the fire is put out by rain, which is seen as a sign that the new year will be a prosperous one.

In #AddisAbeba the religious procession of #Mesqel, (founding of the true cross) by the Ethiopian Orthodox Tewahido Church has started at the Mesqel Square in the presence of religious leaders from Churches in the city & their choir; Pres. Mulatu Teshome & deputy Mayor Takele Uma pic.twitter.com/4EHbtNdP6N

Church lore also states that the then Patriarch of Alexandria gave Ethiopian Emperor Dawit part of the cross as a token for the protection of Coptic Christians. A piece of this is allegedly kept in Ethiopia’s Gishen Mariam monastery, about  100 km outside the capital. The Amba Geshen mountain is also where most of the male heirs to the Emperor of Ethiopia were interned. It was an age-old practice that when an Ethiopian emperor assumed the throne, his brothers and other male relatives would be taken to the royal prison, where they would live until they were called to become the new emperor or they died.

Melkam Meskel! I wish Happy Meskel Festival to all my Ethiopian friends who celebrate the Finding of the True Cross. pic.twitter.com/6a6u9W0mHs

Voices from the Elders: A Report from Tribal Gathering

Rafiki, the Kenyan LGBTQI+ film with the law on its side