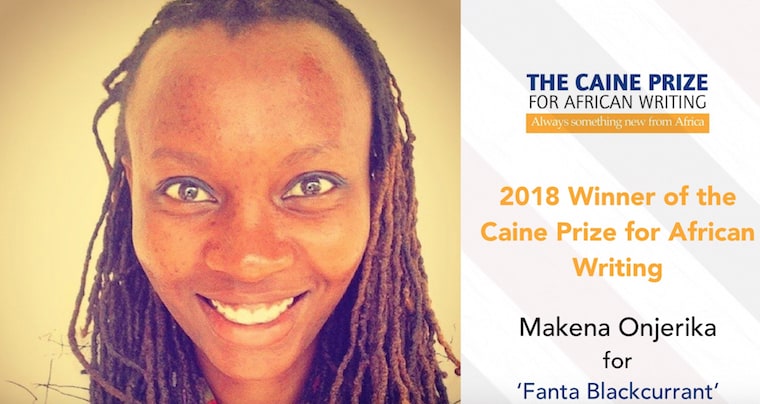 Makena Onjerika won this year’s Caine Prize for her story “Fanta Blackcurrant” which was first published in Wasafiri in 2017. Onjerika is the fourth Kenyan to win the literary award that comes with a cash prize of £10,000 (Sh1.3m).

The award was completely unexpected by Onjerika who told BBC that she was surprised to win and had in fact bet against herself.

“I did not expect it. I had a person that i was betting for among the shortlisted writers… and then I heard my name and I was like are you sure it was me you mentioned?” she said.

#CainePrize2018 to be announced at around 9:45pm. Some of us are looking forward to the wine. Some of us to the food. None of us knows what we'll say for three hours at dinner. All of us hope the air-con will be just right.

Onjerika, a graduate of the MFA Creative Writing programme at New York University, told BBC that she chose to write about street children as “Kenyans – me included – do not see street kids as children. There are children, and then there are ‘chokora’,” she added, explaining the derogatory Swahili term used by Kenyans which translates as “street urchins”.

“Fanta Blackcurrant” follows the story of a street girl, Meri and other street girls doing what they have to do to survive. The story is told from the perspective of another street girl using English street lingo.

The protagonist Meri’s one dream is to have “a big Fanta Blackcurrant for her to drink every day and it never finish”. Unlike the other children in the story who crave “community and acceptance,” Onjerika said that Meri “just wants sweetness” for her life.

The Chair of the Caine Prize judging panel Dinaw Mengestu, praised her narrative in his remarks saying, “The winner of this year’s Caine Prize is as fierce as they come—a narrative forged but not defined by the streets of Nairobi, a story that stands as more than just witness. Makena Onjerika’s ‘Fanta Blackcurrant’ presides over a grammar and architecture of its own making, one that eschews any trace of sentimentality in favour of a narrative that is haunting in its humour, sorrow and intimacy.”

Write till you turn inside out https://t.co/j4XrJrT3Sc

The Caine Prize winner who is staying true to her story and its intention to highlight the struggle of street children told BBC she will donate half of her £10,000 ($13,000) winnings to help rehabilitate them.

“With the rest of the money I’ll buy a car or maybe a motorcycle to get through traffic jams in Nairobi,” she said.

Related Topics:African Author/Writer
Up Next

The Historic Significance of the Herero Dress

Omotola Jalade-Ekeinde invited to become a member of The Oscars