The Historic Significance of the Herero Dress
Advertisement 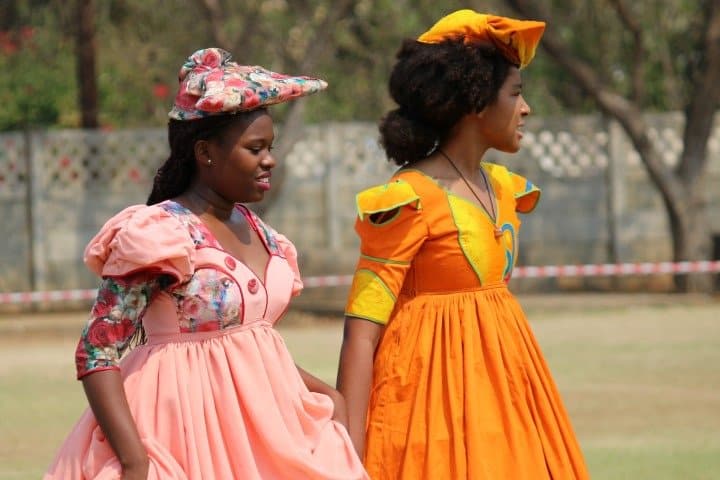 The clothes that Herero women choose to wear is a permanent reminder of the tribe’s unsettling past and history, when the Germans almost exterminated the entire tribe. The genocide nearly wiped out the once prosperous people of Namibia. Their cultural dress is a continued protest against the Germans who butchered them, making it a subversion of their former rulers’ fashion.

The ‘Ohorokova’, the traditional Herero dress, is A-lined, with colourful, vibrant patterns and several petticoats. This creates a wide, structured skirt. The attire is topped off by a cow horn-shaped hat. The Herero people, who are historically cattle breeders, measure their wealth in cattle, and are paying homage to that part of their identity through this traditional fashion staple.

The style of dress was introduced by the German wives of missionaries and colonialists who first came to the country in the early 1900s. Before their arrival, most Herero were bare-breasted and wore front and back leather aprons, made from sheep, goat or game skins. They were known for their ostrich shell-embellished overskirts and metal beadwork, as well as the brass, copper and carved-horn cuffs worn at their wrists and ankles.

Lutz Marten, a linguist at London’s School of Oriental and African studies who specialises in the Herero tribe, explained the significance of the dress to CNN: “It reflects a strong sense of history and the memory of national rebuilding after the [Herero-German] 1904 war,” he said. “It also provides a sense of cultural identity in general, in the historical context and in the context of modern-day Namibia.”.

Read: The age of European enlightenment: The city of Hamburg apologises for its role in African genocide

The long dresses are custom made to match the wearers own personal style and flair. Nowadays the ‘Ohorokova’ is mainly worn for weddings and funerals, so the dress and hat is typically worn only once, making Herero gatherings as much about fashion as occasion.

A video by Refinery 29 shows that as the Namibian fashion industry blossoms, so does the modernisation of the Herero traditional attire. In order to keep it a part of their local fashion, an upsurge of young Herero designers, models and activists are working to keep this defiant part of their heritage alive.