Burkinabi defender Youssoufa Dayou was behind the only goal of the Moroccans after 15 minutes.

“Last years’ experience in the same competition taught us a lot of lessons,” left-back Mohamed Aziz.

“This year we have fought until we reached the final game which reminded us of the last season’s final that we lost in Egypt against Zamalek on penalties. As you have seen, we deserved our win tonight and I say congratulations to all my team and to all its staff and members.”

What was remarkable in Sunday’s match is the number of cards that Cameroonian referee Niante Alyoum dished out to both sides. By the end of the first half, that number reached five yellow cards before it increased to eight at the end of the game.

There was a red-card for Bakr El Hilali of Renaissance.

“It was a huge effort of 15 months. Last year we could not win the title after losing the final game, but this year we have worked hard to achieve this goal. I’d like to express my deep feelings and to thank all the fans of the club who could not be present today here with us”, Omar Namssaoui, right back of RSB told the media.

The players’ celebration was unforgettable at the Moulay Abdellah Stadium, which will certainly be remembered for years by the Berkani fans. RSB has previously won two domestic trophies in history on that ground.

“It was a hard and great work that the club has done for a few years and hard work always pays. I should thank all supports of the RSB who believed in us. This is just the beginning of other titles. Congratulations to Moroccan football too for tonight’s title”, added Amine El Kass, one of RSB’s key players. 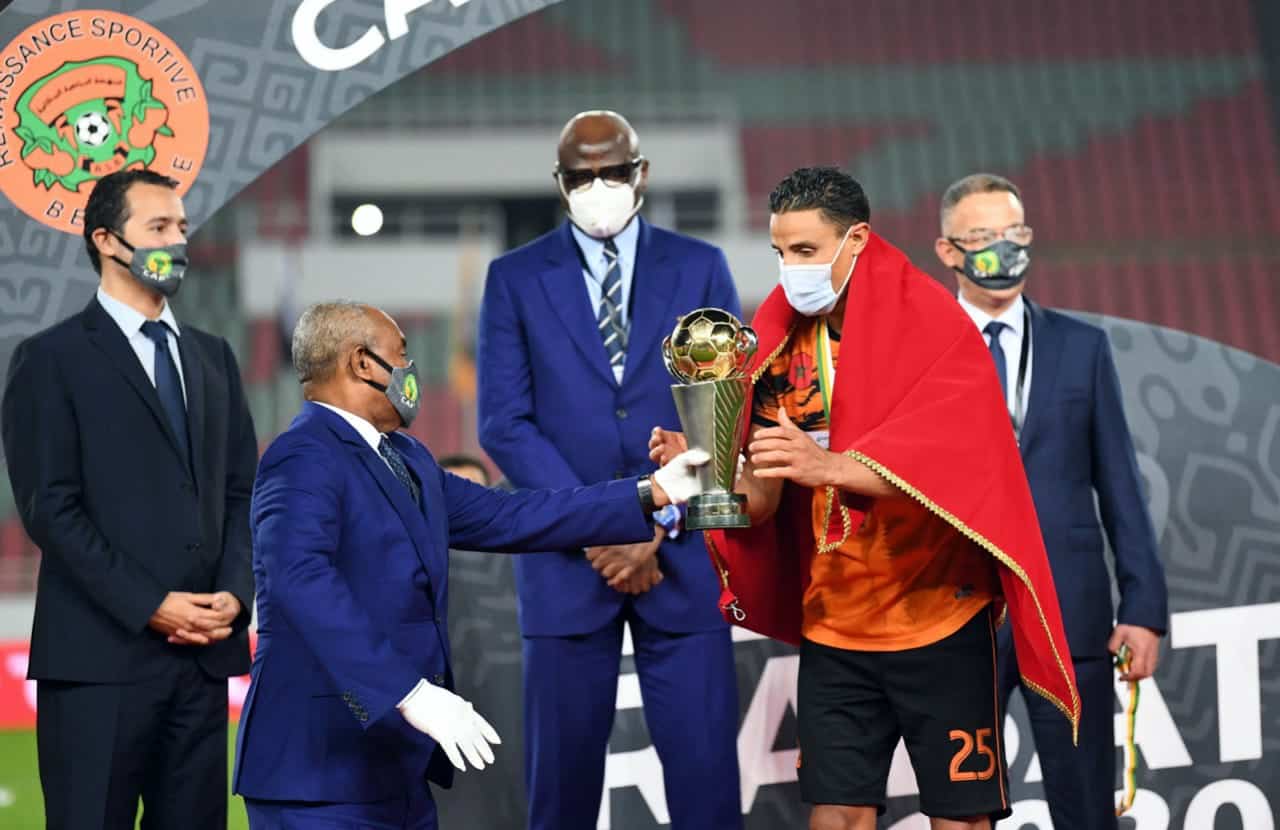 This new title is the outcome of years of hard work for RBS. It would not have been achieved without the good management and governance of current team’s leadership, including its new president as well as that of national federation boss Fouzi Lekjaa, who was the club’s president until last year.

The CAF Cup won by Renaissance Sportive De Berkane is the seventh of its kind for Moroccan football, and the fifth if the new format of the competition is being considered.

The CAF Cup was launched by the African Confederation of football in 1992 modeled after the UEFA Cup.

It was designed for domestic league runners-up or ranked third teams of member associations in their respective leagues.

1996 saw Morocco been crowned the first CAF Cup winners after Kawkab De Marrakech’s 2-0 victory over Tunisians Etoile De Sahel in the second leg final at Al Harty Stadium in Marrakech. The first-leg final match had finished with a score of 3-1 in favour of the Tunisians.

In 2003, Morocco won its second title in the competition after a scoreless draw between Raja Athletic Club and Cotonsport of Cameroon in the second-leg final.

Raja Athletic Club had won 2-0 in the first leg.

However, in 2004, CAF decided to merge the CAF Cup with the African Winners Cup to launch what is called today the CAF Confederation Cup today.

In 2005, “FAR”, or Royal armed forces of Rabat, won their first title in the competition after a historical victory over Nigerians club Dolfins, winning 3-0 in Rabat in the second-leg final.

The first-leg final had finished with a score of 1-0 in favour of the Nigerians.

Five years later, it was the turn of the second Rabat club, Fath Union, to win their first title in the CAF Confederation Cup after their 3-2 win over Tunisians Club Sportif De Sfaxe in the second-leg final,

The first-leg’s score was a scoreless draw.

In 2011, Moghreb De Fes was the fifth Moroccan club to win the cup in its history and the third in the history of the new cup’s format. They beat Club Africain of Tunisia in the second leg final in Fes on penalties after a victory of the Moroccans 1-0 at the end of the match.

In 2018, it was Raja again who could win their second title in the CAF Cup.

It is to be noticed here also, that Morocco won the African Winners Cup only once in history, and that was in 2002 by Wydad Athletic Club. They lost their second-leg final in Ghana against Ashante Kotoko 1-2, while they won their match in Casa 1-0.