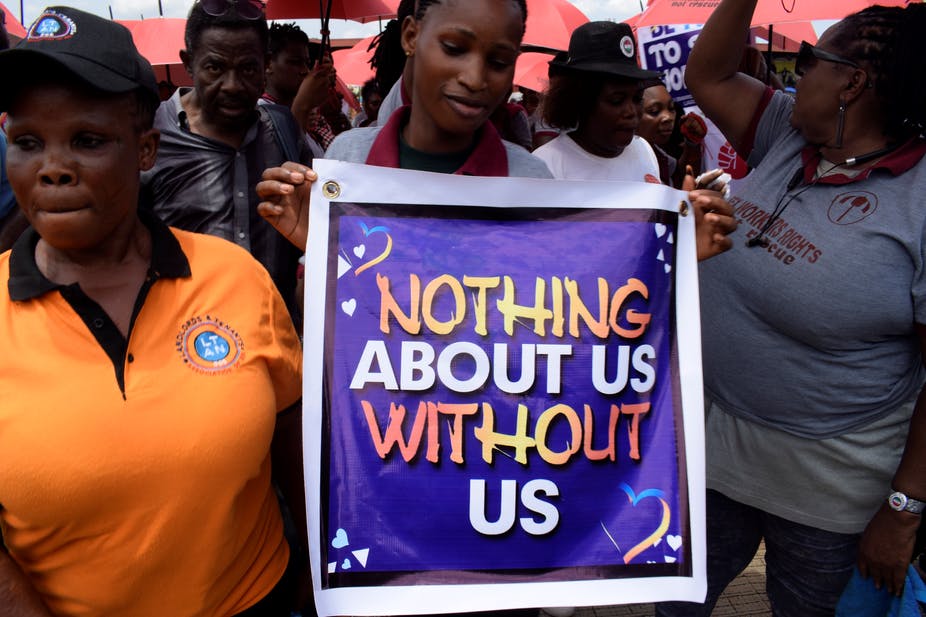 In most African societies today, social, cultural, economic and political forces continually place women in the back seat. While there is much focus on the physical abuse of women, there are other ways through which abuses are sustained. One is how the media represent the realities of sex work and sex workers.

The term ‘sex work’ (derogatorily known as prostitution) was coined by Carol Leigh as a means of creating “an atmosphere of tolerance within and outside the women’s movement for women working in the sex industry”. The growing popularity of the term is a result of the rise of activism among sex workers and advocacy for their rights.

Sex work is abhorred in many African societies. But, “Why is it that a practice so thoroughly disapproved, so widely outlawed … can yet ﬂourish so universally?” asks American sociologist Kingley Davis. The sex business has remained with man because it performs a role in society.

There are inconsistent and unreliable statistics about sex work and sex workers worldwide. But by way of comparison, in Germany it has been reported that the sex industry is worth roughly €14.5 billion, the equivalent of a third of Nigeria’s oil and gas industry. However, while sex work is recognised as work in Germany, in Nigeria, the business is considered abhorrent even though it is thriving, with an estimated population of 103,506 sex workers in 2017.

It has been estimated that women involved in sex work are 60 to 100 times more likely to be killed than the average woman. They suffer crass human rights and sexual abuses. Like most minority groups, they suffer marginalisation and social exclusion.

While studies in Nigeria emphasise the general representation of women in a multi-cultural society, there are sparse studies that problematise and address the voice of sex workers within a media context.

It is in view of such gaps that our recent study seeks to examine how sex work and sex workers in Nigeria are represented by the news media.

The study sought to identify the different ways in which sex work, sex workers and their clients are constructed and represented. We further wanted to know how the news media orchestrate, coordinate and perpetuate male dominance through the portrayal of the sexuality of men and women.

We sampled 30 news stories that were published between 2017 and 2020, collected from the websites of three newspapers: Daily Sun, Vanguard and Daily Trust. These were selected based on their market segmentation, continuous publication over time and regional pre-eminence of coverage. We also interviewed two male and two female journalists who authored some of the stories we analysed.

The study found that newspapers are used as channels where issues about sex workers and their lived experiences were framed and reframed, their identities negotiated and renegotiated. The Nigerian news media we studied tend to be obsessed with framing female sex workers in negative ways. They were mainly constructed as dangerous to society.

Even though studies in Nigeria reveal that there are male sex workers, the news media all framed sex work as a business only of and by women.

The media in our study tended to be vocal about the suppliers of sex while downplaying those who patronise their services. Sex providers, for instance, were described as “women of low virtues” or “ladies of the night” who ply an “unholy trade”. Their male patrons were simply described without pejorative words; as “men”, “politicians”, “clients” and “patrons”.

This suggests problematic journalistic biases that entrench the culture of male-privileging. This is an ideology of double standards that make men feel morally and physically ediﬁed, while women are tarnished for violating the same social norms.

Many of the news stories we analysed were illustrated with cropped pictures emphasising female breasts, thighs, legs, lips and buttocks. Seven of 10 stories by Daily Sun used photos in this way to provoke reader attention and stir controversy. A study by Sonke Gender Justice in South Africa reveals that such use of images undermines “the multiplicity and complexity of sex worker lives and reinforce negative stereotypes”.

Sex workers face dangers that include physical attack, rape, ritual killing and murder. Their many challenges were sparingly mentioned by the news media. When they were, sex workers were still mainly cast in a poor light. Daily Trust reported that in Ebonyi State “prostitutes” and “harlots” were threatened with eviction. The report quotes a government representative:

If we don’t (evict them), it means that the whole place … would be threatened by these hoodlums hiding behind the prostitutes in the market.

Even though the sex workers were not “hoodlums”, they were treated like they were. The content analysis determined that of the articles sampled, 73.3% were constructed as “bad” (the language used to portray and construct sex work was used in a negative, derogatory way), 23.3% were “neutral” and 3.3% “good”.

Other studies reveal that most government policies have neglected the multifarious needs of sex workers. This makes sex workers vulnerable to violence, poor health and numerous other factors, making it more challenging to move out of their circumstances.

This study reveals a systematic delegitimisation of sex workers through biased and negative representation by news media in Nigeria, entrenching a culture of privileging that pushes these women into deeper marginalisation.

Related Topics:NigeriaSexSex workSexual health
Up Next