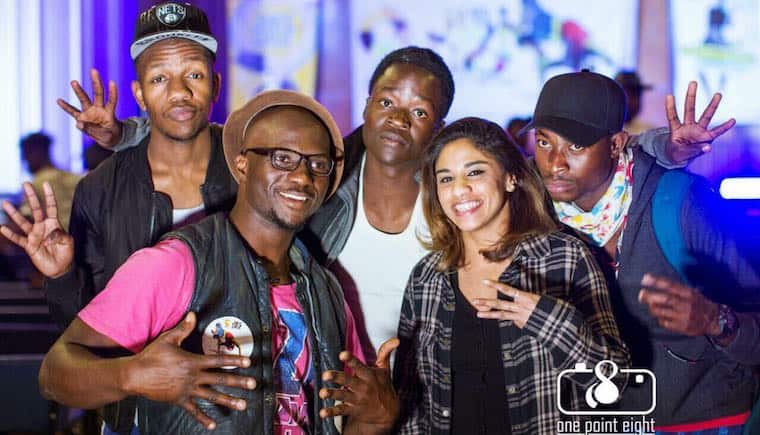 The cliché that ‘disability does not mean inability’ might have been coined with the Zimbabwean dancer Blessing Fire (aka Christyles) in mind.

I was first drawn to his work when I saw him perform in a dance piece, titled ‘Broken Pavement’, with his crew, known as 4GO10 Tribe, at the opening of the Jibilika Dance Festival in Mutare, a city in the east of Zimbabwe.

There he was, on stage, communicating in a unique language. He was jumping off his wheelchair, doing jackhammers, a move in which he supports his entire bodyweight by pushing his elbow into his stomach, forming a 90-degree angle with his hand on the floor. He then bounces around the stage on that supporting arm, his body spinning round and round. That awesome move then fused with windmills, baby spins and headspins. The audience was awestruck, soaking in his expressive b-boy moves. All of this was woven into a tale that told the story of his life; the struggles of growing up and living with disability.

For many, the performance was testament enough to what determination can achieve, but I had to know more. So we sat down for a talk and Blessing opened up.

Born with deformed legs, he started using a wheelchair in his early years, with little hope of ever walking. His fighting spirit and determination to defy the odds started surfacing when he was only four and he started challenging himself to walk. He soon successfully mastered short distances around his home.

Stigma and the abuse of the disabled

Blessing’s mother tried to protect him from a world that stigmatises the disabled by keeping him indoors. He was locked away from the eyes of their neighbours and anyone who was not close to the family. But he had to be educated, which meant going to school – which is when his mother’s worst fears were realised. His predicament was not helped by the fact that he was at a conventional school with ‘normal’ kids.

Blessing’s first nightmare was his first-grade teacher, who made him stand up for a long time as a form of punishment. At this point of his life, his legs were so weak that he had to wear shoes with callipers. At night, after school, he would cry from the pain in his legs. His mother noticed and reported the matter to the school administration.

But life got worse as the teacher made an example of him to other students as she tried to make sure that ‘what happens in school stays in school’. She refused to mark his books or pay any attention to him, all the while bad-mouthing him to other teachers.

From then on, everything he did was marked with suspicion. Other kids would mock and bully him. When he tried to defend himself, no teacher would believe him to be the victim. It was him against the world. Blessing faced all of this alone, afraid that if he said anything, things would get much worse.

Though facing hardships, Blessing saw beyond his disability and fought to make something of his life. He eventually found solace in dance, and now he tells his story through the same medium.

His first contact with dance was seeing his brother do gymnastics. He imitated him, showing amazing use of his hands and an extraordinary sense of balance. His brother encouraged him to try beat boy (b-boy) breakdance, a hip hop and funk music dance style that requires a lot of body movement and energy.

This is someone who, according to doctors, was not supposed to do any physical sport that required full body movement and energy, no matter how passionate he may have been. He trained hard, until his legs became strong. At 19 he did away with his wheelchair.

The fruits of determination

In 2007, Blessing and his crew, Inmates, won the Undisputed Dance Battle. A year later they grabbed the title at the country’s biggest urban dance competition, the Jibilika Dance Festival. In 2009 he was picked to be part of a crew that represented Zimbabwe at the Battle of the Year Africa in Cape Town, South Africa.

Blessing also won the Zimbabwe Dance Finest competition in 2012 and he was the Strictly Hip Hop B-boy winner, bringing home a gold medal from the competition in South Africa.

Through dance, Blessing has made more friends who accepted him for who he was and appreciated his exceptional talent and dedication to his art. He found his voice and is now using it to spread a variety of messages, not only on disability but also on gender-based violence, HIV and AIDS, drug abuse and more.

With 4GO10 Tribe (Forgotten Tribe) he aims to “inspire the world to see that limitations only exist in your mind. If you don’t believe them, nothing can stop you from rising to the top and living your dream. ‘Broken Pavement’ is a letter to those who feel like giving up because of challenges and circumstances. There is nothing that can stop what the Lord has created you for.”

To me, Blessing’s story did not only speak of the challenges of the disabled but also of how people are bullied into silence. Not all of us are vocal but there is always a way to speak up against abuse. He uses dance, but he collaborates with musicians and poets to tell his story.

Young Zimbabweans have been using dance to communicate different messages to their peers, including on drug abuse and HIV awareness. ‘Broken Pavement’ will be staged again at the 2016 Shoko Festival in Harare on 23 and 24 September, along with other dance theatre performances. It is an experience not to be missed.

The rebellious spirit of Chale Wote