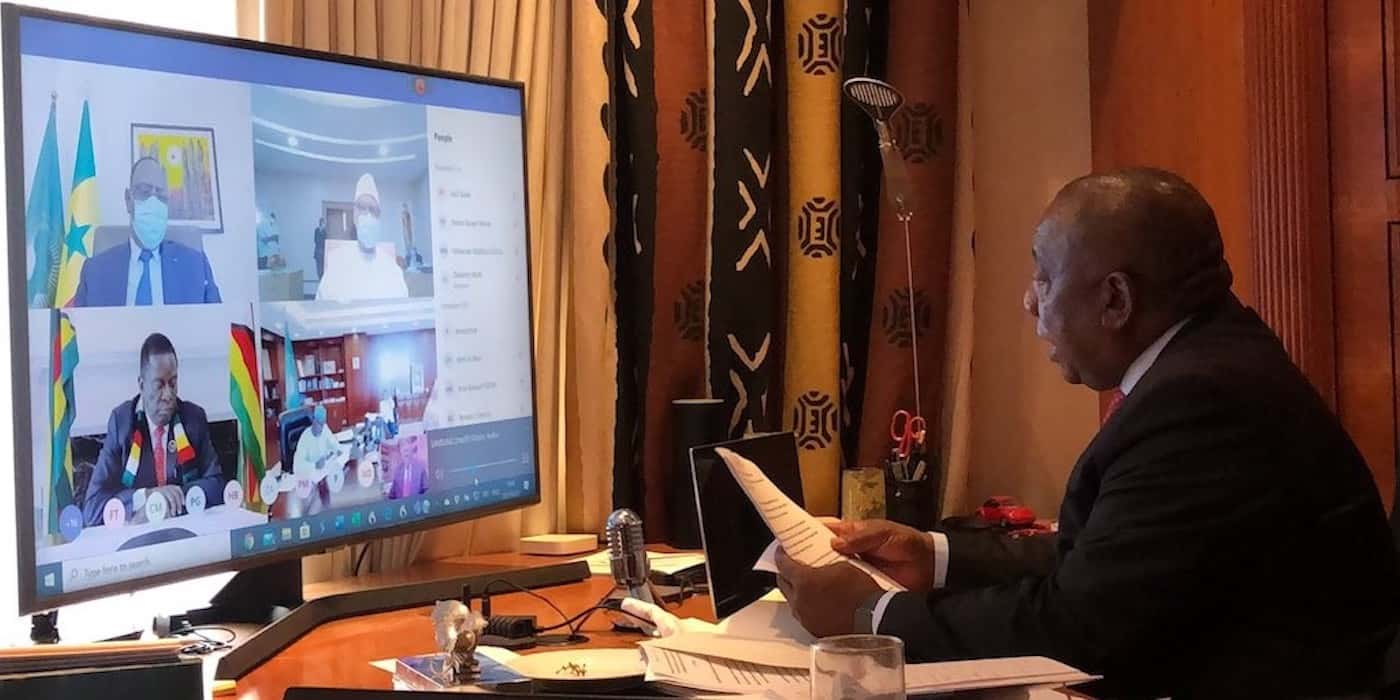 South Africa is set to conclude its one-year tenure as African Union (AU) chair at the next AU summit in February 2021. Like for many, its plans for the AU, which included silencing the guns, women’s financial inclusion and championing infrastructure development, were largely derailed by COVID-19.

President Cyril Ramaphosa’s leadership and inclusive approach to handling COVID-19 on the continent have been widely acknowledged. ‘Everyone is grateful that Ramaphosa was the one chairing the AU during the pandemic,’ a high-ranking AU official told ISS Today.

Ramaphosa appointed several committees and special envoys to deal with the health and economic fallout of the pandemic. There were at least seven virtual meetings of the AU bureau, with each region of Africa represented. At the most recent gathering last week, Ramaphosa launched the African Vaccine Acquisition Task Team to ensure African countries have access to a future vaccine, for which around US$13 billion must be raised.

South Africa was also praised for championing Africa’s concerns about the pandemic in international forums such as the G20. One reason for the success is that combating COVID-19 is a largely uncontentious issue among African states.

Tackling the socio-economic fallout from COVID-19 also suited Ramaphosa’s focus on economic development at home and abroad. South African foreign policy generally and its approach to the AU has favoured development issues over security issues.

Ramaphosa didn’t make much headway on the AU’s 2020 theme, Silencing the Guns: creating conducive conditions for Africa’s development. Online platforms could have enabled leaders’ summits and public discussions on crises such as those in Libya and South Sudan – two of South Africa’s priorities – but this didn’t happen. The South African president disappointed many by shying away from tackling governance abuses and democratic backsliding on the continent.

Flawed polls in Tanzania and Côte d’Ivoire were regarded by Ramaphosa as ‘successful’ despite huge concerns over the fairness of these processes. He even proclaimed the election of Ivorian incumbent Alassane Ouattara as ‘a positive step towards deepening democracy,’ a label few observers would agree with.

South Africa did little in its role as AU chair to drive action on burning issues in Southern Africa that affect the entire region – notably the socio-economic and governance crisis in Zimbabwe and violent extremism in northern Mozambique. The AU chair has a mandate to ensure certain issues are tabled by the AU Peace and Security Council for discussion, in conjunction with the AU Commission chairperson.

At the AU level, it is the prerogative of the Southern African Development Community (SADC) to have the first option to decide on what to do in these two countries. But as AU chair, South Africa could have used its mandate to make public statements to highlight issues, organise joint AU-SADC fact-finding missions or summits, or appoint special envoys to deal with these crises.

Admittedly, online platforms aren’t conducive to sensitive negotiations and exerting soft pressure on heads of state who disregard AU rules of collective behaviour. But COVID-19 restrictions haven’t prevented intervention elsewhere in Africa. The AU, the Economic Community of West African States and the United Nations (UN) are, for example, working together in many places in West Africa to intervene in crises – such as those in Mali and Guinea.

It remains to be seen whether the situations in Zimbabwe and Mozambique will be on the agenda of the special extraordinary summit on Silencing the Guns that will be organised by South Africa, virtually, on 5 December.

South Africa did make an impact on the negotiations around the Great Ethiopian Renaissance Dam, ensuring that the AU, not the UN Security Council, leads on the mediation. Ramaphosa and international relations minister Naledi Pandor chaired numerous meetings on the issue and technical assistants were brought in to beef up negotiating teams from Egypt, Sudan and Ethiopia.

The current civil war in Ethiopia will be a setback for that process. South Africa is yet to make a statement about the escalating crisis in the country that hosts the AU headquarters.

One of the immediate consequences of South Africa’s chairmanship is its new drive to ensure a presence in the top leadership of the AU Commission. The country has four candidates in the last round of elections for the commission, which take place at the next summit in February. This includes two candidates for deputy chair and candidates for the Commissioner of Political Affairs, Peace and Security and the Commissioner for Education, Science, Technology and Innovation.

These elections are based on regional and gender representation and strong candidates are being fielded from other Southern African countries. South Africa isn’t likely to get more than one position but this will be a change from previous years and is certainly encouraging. Since the four-year tenure of Nkosazana Dlamini Zuma, the country has been largely absent from the AU headquarters.

Over the longer term, South Africa’s impact should be felt in the way the AU bureau was convened. It signalled a shift away from the regular use of the AU-troika to a more inclusive system.

Taking heads of state meetings online – which are costly and time-consuming to organise in person – could also influence the AU’s future working methods. In the past year, civil society organisations around the continent have participated in AU events in ways they couldn’t before. This could lead to a more people-centred AU – an aspiration of Agenda 2063.

Drawing in private sector and technical experts to beef up the AU’s responses was also a hallmark of South African’s tenure as AU chair.

Whether these changes will have a lasting impact depends on how much is taken on board by the next chair, the Democratic Republic of the Congo. It will also depend on how the new AU Commission carries forward the values of inclusivity and transparency. To ensure greater relevance for the AU however, a clearer focus on crises that affect the lives of millions of Africans will be needed.