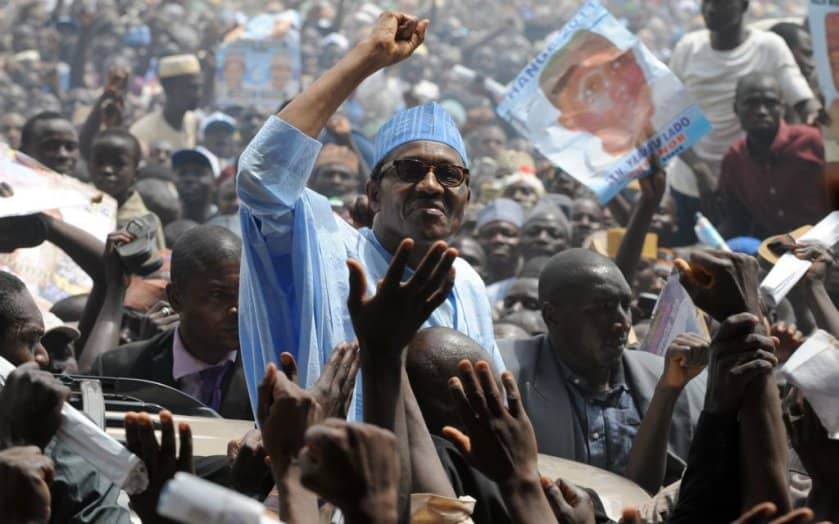 President-elect Muhammadu Buhari will inherit something of a perfect political storm when he takes office in a few weeks. He ran a well-orchestrated campaign as an outsider, an agent of “change,” and the “answer” to everything that ails Nigeria.

Well, it happens that Nigeria is in deep, deep doo-doo. And, come May 29, every Nigerian will look to Mr. Buhari to start fixing things.

Buhari, I predict, will have the shortest honeymoon of any recent Nigerian leader. His political acts will be closely scrutinised, right from the outset. His ministerial list better be beyond reproach, or he’s going to hear about it. Let him nominate a man or woman with an odoriferous past, and Nigerians are bound to cry betrayal!

We have already seen a glimpse of what awaits his presidency. When Mr. Buhari’s aides made the disastrous decision to exclude AIT Television from covering the president-elect, that ill-advised move provoked great outrage. “It’s not the change we asked/voted for,” became the refrain on social media. As president, Buhari’s every misstep is bound to attract such similar censure.

Gridlock in Lagos. Buhari will have to provide answers for Nigeria’s dilapidated infrastructure. Photo: The Times

He better gird himself, then, for a bumpy ride. He will become Nigeria’s first citizen at a time when too many things are out of synch, and he has little—very little—margin of error.

Come May 29, Nigerians will look to the “Answer” to answer about corruption. They will look for evidence that their new president has plans to jail those who, through acts of corruption, have contributed to wrecking Nigeria. They will look to him to neutralize Boko Haram. They will demand a roadmap to reliable electric power. They will want to see movement on fixing their country’s dilapidated infrastructure.

Nigerians’ great expectations are going to test Mr. Buhari’s mettle as a politician and his measure as a leader. How is he going to balance the business of fighting corruption against the duty of addressing Nigeria’s developmental woes?

This question is of the utmost import. After all, many Nigerians desperately want to see the incoming president battle the monster of corruption. But some of them may not have reckoned with two salient facts. One is that any war against corruption would, for one, demand time and other resources. The second one is that the very nature of political realities that shaped Mr. Buhari’s election is likely to constitute an impediment to his full prosecution of an anti-corruption policy.

The incoming president will not have enough time to uproot corruption, which is too deeply rooted. Nor does he have the political wherewithal to launch an all-out assault on corruption.

A protester holds a banner during an Occupy Nigeria demonstration in Lagos, Nigeria, January 9, 2012. Photo: AP

Let me contextualize my assertions. An effective war on corruption cannot be a flash in the pan, or a mere exhibition game. Many Nigerians tend to talk about corruption in the limited sense of the egregious acts of presidents, governors, ministers, commissioners and legislators. But the malaise is entrenched in every sector of the Nigerian society.

Sometimes, it’s civil servants who perpetrate the more devastating acts of corruption. Too many customs officers receive bribes to enable importers to evade the payment of duties to the government. Rather than focus on fighting crimes, many Nigerian police officers prefer to set up checkpoints that are, simply, bribe-collection points. How about bureaucrats who sell civil service jobs to the highest bidder, regardless of credentials? How about lecturers who award grades to their students in exchange for cash or sex?

Yet, when many Nigerians expound on a war against corruption, all they want to see is the jailing of people with high-profile political offices. Mr. Buhari cannot ignore this dimension of the fight. That’s why it’s encouraging that he has vowed to revisit the whole controversy of the billions of dollars in crude oil revenues that were not accounted for. The unmasking and humiliation of men and women who betrayed their high political offices is utterly important. For one, it can serve as a deterrent to those in less visible positions.

In a perfect world, Mr. Buhari should go after and jail every political office holder who has fiddled with public funds. The reality is that he will NOT. And he will not because, among other reasons, he CANNOT.

For all his pretention to being an outsider, the president-elect is, first and foremost, a politician—and a seasoned one at that. He made a calculated decision to run on the platform of the All Progressives Congress (APC), a party that—in character and personnel—closely resembles the much-despised Peoples Democratic Party (PDP).

Let’s not delude ourselves: the APC is far from a party of saints. It has an ample contingent of crooks to give the PDP a run for its money any day. But many of these crooks worked hard, spent tons of ill-gotten funds, to champion Mr. Buhari’s presidential run. Unless he’s more eccentric than we ever suspected, the president-elect is not going to throw his corrupt political sponsors into jail. And if he doesn’t, then where would he find the political capital and moral authority to shame corrupt men and women who belong to other political camps?

This does not suggest that he should do nothing—or little—about corruption. In fact, he must act—and act boldly—to change the culture of corruption that has brought ruin to Nigeria. His peculiar predicament presents an opportunity for an approach to fighting corruption that can be at once comprehensive and effective, even if it does not serve the public’s (understandable) appetite for drama and harsh retribution.

Here, then, is an outline of a modest proposal for combatting corruption. First, Mr. Buhari ought to take steps to place institutions, rather than persons, at the center of any war against corruption. His greatest legacy would lie in taking steps to strengthen and professionalise institutions like the police and the Economic and Financial Crimes Commission (EFCC). The EFCC and the police should be empowered to go after any criminal, regardless of position or status, without first seeking the president’s permission. In the same spirit, the president-elect should initiate measures to ensure that the Nigerian judiciary is fiercely independent, and that only persons of proven ethical disposition and sound knowledge are nominated for judgeships.

Buhari’s greatest legacy would lie in taking steps to strengthen and professionalise institutions like the Economic and Financial Crimes Commission. Photo: Reuters

That’s in the long term.

In the short term, he should set up a commission on restitution of proceeds of corruption. He should offer a grace period of six months to all public officials, past or incumbent, to approach the commission and make full confessions about their acts of corruption. Each confession must include honest disclosure of the value of illicitly acquired funds and assets. The law setting up the commission should extend immunity from prosecution to all self-confessed looters, on condition that they return a certain percentage of what they stole. I think anything between 30 and 50 percent would make sense. Why not demand the return of all stolen assets? The simple reason is that corrupt people tend to be promiscuous spenders, and many of them would have frittered away much of their loot.

A commission on corruption meets the demand of equity. It would enable Mr. Buhari to treat all corrupt politicians, including his foes and friends, with the same standard. The incoming president should warn all, including his political friends, that they risk investigation and prosecution should they fail to take advantage of the mercies offered by the commission.

Of course, if President Buhari is serious about curtailing corruption, he should also specify that, going forward, all who betray the public trust, whether political friend or opponent, should be prepared to pay the price.

Advertisement
Related Topics:Corruption
Up Next

The young and the violent