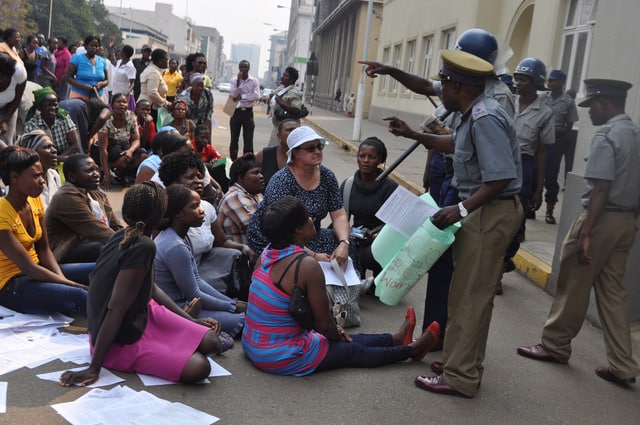 In Zimbabwe, citizens are not allowed to embark on public demonstrations/processions without prior notification (and agreement) of a ‘regulatory authority’ of a geographic area. This regulatory authority is generally a Zimbabwe Republic Police (ZRP) officer commanding a police district. This is in terms of the Public Order and Security Act (POSA- especially sections 23-28). The requirements thereof are rather cumbersome but are to be adhered to in terms of the law.

They include but are not limited to written letters of notification to the regulating authority, names and addresses of at least two persons organising the procession or march. Further meetings with the police also have to be held as and when circumstances surrounding the public event change. Such changes can be on the part of the organisers and also the regulatory authorities and must be put in writing.

For many a citizen, civil society group or corporate body intending to undertake such processions or marches this is a familiar tale. Not only in terms of their having tried to either have the act or sections of it amended via Parliament/government, but also by having to follow its requirements in order to avoid being accused of having ‘dirty hands’, a legal principle that appears to be firmly entrenched in our jurisprudence.

Why should ordinary citizens have to pay money to exercise a constitutional right. Photo: Mercedes Sayagues/IPS

The catch to all these procedures however is that the police as the designated regulatory authority – save for instances where someone launches an appeal to the minster of home affairs or goes to court – have tremendous powers to permit or refuse permission for people to exercise what should, for all intents and purposes, be one of the most enjoyed democratic rights in the country.

Apart from the fact of the outlined legal process of acquiring what is essentially permission to hold a march/protest, there are other not-so-publicly spoken of requirements. It turns out that there are other costs that come with police clearance letters. These include the requirement that those intending to hold processions pay a remittance fee for police escorts during such events.

This however is not in terms of POSA itself and one can only assume there is some statutory instrument that allows the police to then ask for some form of payment. I know of specific permissions for police to do so where and when it concerns weddings and other entertainment related public activities. These however do not fall under POSA. It is however intriguing that a final hurdle toward getting the permission to hold a public march would be the requirement of a payment. Such a requirement would probably need the input of our Constitutional Court if indeed it is law.

But it appears that in relation to public gatherings and events that are defined in terms of the Act, there is now the added pre-condition that there should be some form of payment to the police in order for there to be a guarantee of the event in question being permitted to take place.

From narratives I have received from colleagues who have been holding public processions they have been asked to pay for the costs of being escorted by the police. This is in the case where the general permission to hold such a protest has been given but with this added conditionality.

The responsibility of paying the police should not lie with ordinary citizens. Photo: Tsvangirayi Mukwazhi/AP

Now it is obviously cumbersome enough to get the initial permission with all the procedures that the act requires. To then be asked for a payment or else not hold the march is to worsen an already undemocratic state of affairs. It is tantamount to saying, formally, if you have no money, but a decent public issue such as raising awareness on public health matters through a procession/march, you can’t hold it. Or if you are poor, then you cannot organise a march that will be permitted by the regulating authority.

This is therefore an assault on the rights of Zimbabweans to assemble, associate and express themselves. Not that POSA does not already limit this right but to do so on monetary terms is to appear to want to strangle this right further. The obligation of paying police officers for doing their duty resides with Treasury and not citizens.  The provisions of security of property during processions is already catered for in terms of section 28 of the same act which addresses issues of civil liabilities.

For those that have to exercise their right to protest in order to be heard and understood, such payments may seem necessary or even pragmatic given the general repressive attitude of the state toward the same. The only problem is one should not pay money to exercise a constitutional right. And this is an issue that must not be swept under the carpet. Dialogue and a request for answers must be undertaken with the ZRP, the ministry of home affairs and every other Zimbabwean that cherishes the rights to assemble, associate and express themselves.