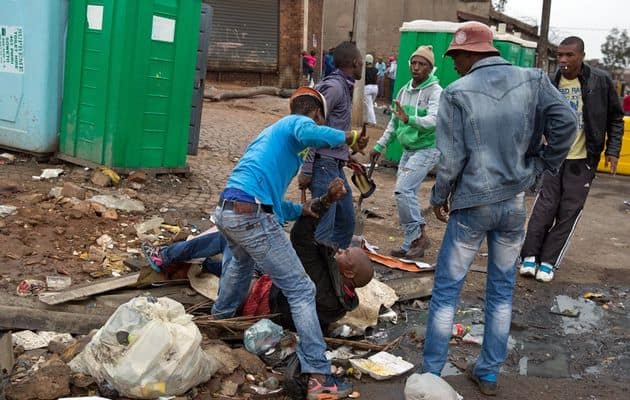 His name was Muvo – government didn’t know much more when it briefed the media on 28 April. Muvo, a Zimbabwean national, killed by a mob in Chatsworth, Durban. Dava Sabastio, a Mozambican, also killed by a mob. Marcus Natas, an Ethiopian, petrol bombed. Shaofic Shaof Ul Alam, a Bangladeshi, shot dead. Three South Africans were also killed in the April violence, one apparently shot by a Somali.

And then there was the slaying of Mozambican citizen Emmanuel Jossias, also known as Emmanuel Sithole, which made front-page news. His death, however, was excluded from the toll; it was an act of “criminality” not “xenophobia” said the government spokesperson; “a robbery gone wrong” according to police.

Ironic that the one death which probably did more to galvanise national opinion against xenophobic violence and to move the government to action was excluded.

Those still clinging to the old presidential denialism of 2008 – ‘oh, no, we have no xenophobia in South Africa’ – were quick to blame the media for jumping to conclusions, that untransformed South African media agenda that views everything through a colonial and apartheid lens to promote strife and internecine war between Africans; those Eurocentric academics and mischievous human rights institutions that undermine “nation building” and “social cohesion”.

This is simply a plea for African intellectuals to adopt a new, this time politically correct, prism and allow themselves to be co-opted into a different project – pan-African unity building, whatever the facts on the street might be. In their parochial battle with the local media, these commentators completely ignore the voices of an enraged African continent and the voices of the African victims in their midst who keep on telling them they really are being targeted because they are not South African.

It is true that labels of any kind can quickly blind us to real and complex issues –xenophobia or more correctly afrophobia characterises the violence, it is not its one root cause. But the patriotic defence that there isn’t an afrophobic dimension to the violence is itself an example of arrogant South African exceptionalism; South Africa with its much-praised constitution, the merits of which it struggles on a daily basis to persuade its citizens.

My country is like any other country, from Sudan to Texas, we have plenty of xenophobes, afrophobes, tribalists, homophobes, racists and misogynists. The only thing we have been spared to date is a religious civil war and for that South Africa is most fortunate.

Why then was the 25-year-old Emmanuel, a street hawker selling sweets and cigarettes, who has lived in South Africa for nearly 10 years, killed in cold blood? James Oatway, who photographed the repeated beatings meted out to Emmanuel by several men and then the fatal stabbing on that Saturday morning on Second Avenue in Alexandra, Johannesburg, where foreign-owned shops had been looted the night before, certainly thought it was xenophobic, though he presented no direct evidence.

The four young men arrested for the murder, aged between 17 and 22, are all jobless. The men, caught red handed on camera beating a helpless man on the ground with a wrench after chasing him down the street, told the court on 13 May that they are “not violent” people.

Only one of them, Mthinto Bhengu, photographed with the knife, will be charged with the murder. Understandably, the victim’s family has expressed their lack of faith in the justice system.

Was Emmanuel then killed for a couple of cigarettes, so that a few unemployed men could have a smoke for free? The accused live in shacks. The victim was killed amongst overflowing sewage and piles of uncollected garbage. A cigarette costs R2.50 (18 Euro cents).

‘The situation was ‘under control’, but everyone knew that in the soul of almost every being in this area raved a seething madness, wild and passionate, with causes lying deep. No cursory measures can remedy, no superficial explanation can illuminate. These jovial faces can change into masks of blood lust and destruction with no warning on smallest provocation!’ wrote Can Themba in the 1950s about mob violence in Westbury township, Johannesburg. In that short story, the mob is triggered by forbidden love across tribal lines.

We may never know for sure what flashed through the minds of Emmanuel’s assailants on 18 April. What could ignite such barbarity? None of the men have turned up a criminal record. Yet it appears the only reason they stopped beating him was the presence of the camera. Did they see a foreigner, an exploiter, someone who shouldn’t be doing better than them?

Did they see a foreigner, an exploiter, someone who shouldn’t be doing better than them? Photo: James Oatway/Rex Shutterstock via Daily Mail

Would they have attacked a South African, born and bred in Alexandra, as easily and with the same ferocity? Were they around for the pickings after the foreign-owned shops were looted hours before or had they themselves participated earlier in those thefts? Where were the police?

Those who do not want to attribute the violence to afrophobia and prefer to lay the blame with the anger and systemic suffering of the poor and marginalised, forget another complicating factor; if it is not afrophobia per se, it is an afrophobic system that leaves foreign nationals vulnerable to attack. The community often – but not in all cases it must be emphasised – does not defend them. South Africans can often act with impunity against undocumented immigrants, because they have less recourse to the law. If they lay charges when robbed, they may well find themselves deported. And this prejudicial system is not confined to the townships. Police and home affairs officials extract bribes; employers pay exploitative wages.

It is also true that the troubles of freedom, the sudden brutal competition for state and other resources, coincided with the first wide-scale domestic experience of foreign national immigration in a South Africa previously isolated during apartheid. That isolation from the rest of Africa, from exposure to Africans who had already been liberated for decades, cannot be simply discounted. In fact, the first attacks already occurred in 1994 in Alexandra with community members destroying the homes of suspected undocumented foreigners and marching them to the police station for deportation.

Afrophobia is alive and well in South Africa, whether or not it is the national character. It is not something manufactured by the media.