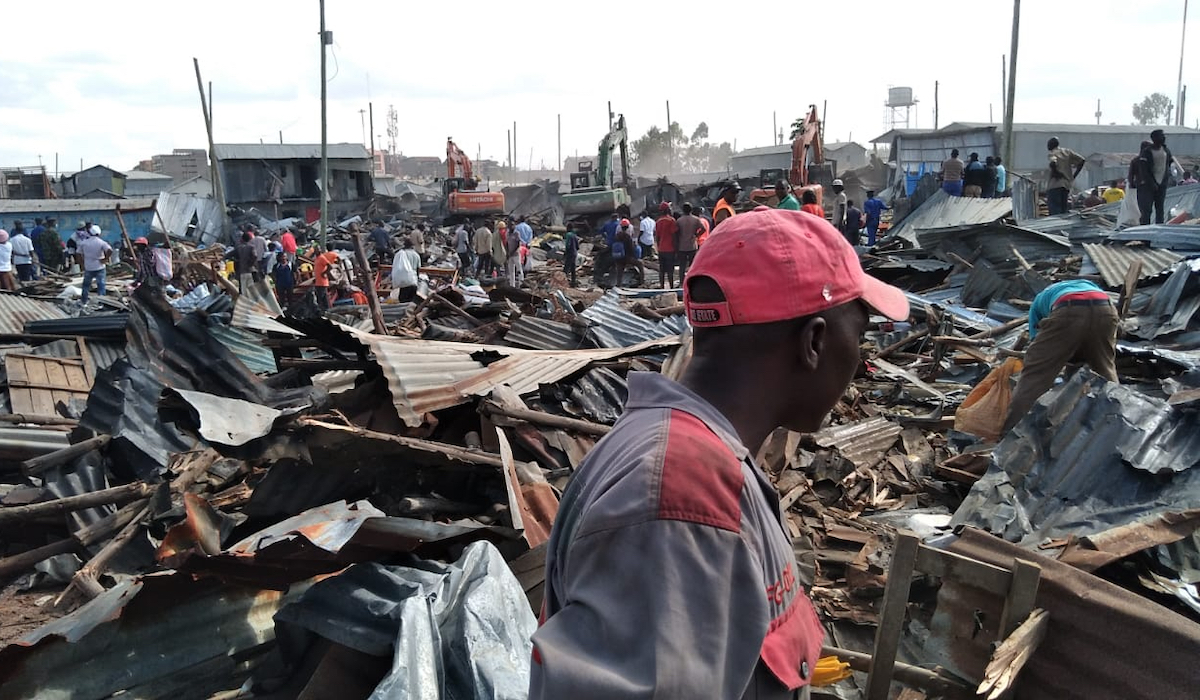 Kenya is suffering from a pandemic of demolitions. In February 2021, the Nairobi Metropolitan Services (NMS) announced plans to demolish houses in Kibra to pave way for the construction of a Ksh 5.8 billion 28km road to link Kibra to Lang ata, and Southern Bypass. The project was part of the planned rehabilitation of 444km of roads in Nairobi County across Kawangware, Riruta, Dagoretti North, Mathare, Kangemi and Mukuru Kwa Njenga. Other estates targeted were Zimmermann, Githurai 44 and 45, Mwiki, Chokaa, Njiru, Dandora and Kariobangi. The announcement marked the beginning of haphazard property demolitions, a majority without any eviction notice. From Kibra to Kariobangi, the story was the same: tens of thousands of residents were rendered homeless and forced, most times with children, to spend nights in the dark, cold, insecure nights. Markets were not spared either with the government closing Korogocho market without offering alternatives to traders. More than 100,000 people from several informal settlements depended on the market to make a living.

The demolitions were not restricted to Nairobi. On the 8th of February 2021, Kisumu residents woke up to a wave of demolitions in Kibos, Otonglo, Lela, Maseno and Muhoroni, carried out by Kenya Railways to reclaim land for rehabilitating the Nakuru-Kisumu metre-gauge railway. The demolitions of structures built six metres from the railway line subjected residents to untold pain and suffering. Thousands spent the night in the cold after their houses were demolished. The County government accused the corporation of implementing a rogue exercise without consulting local leaders or even presenting a resettlement action plan. Despite the Kisumu County government criticism of Kenya Railway; barely two months later, on April 20th 2021, the administration ordered its own wave of demolitions targeting buildings and structures erected on sewer lines. Government agencies justify these demolitions with a single stock answer: “they were there illegally” and this has been the answer for many years.

In 2018, Amnesty International Kenya raised deep concerns about demolitions in Ngong, Lang ata and Kibra, under the watch of armed guards, noting that “the demolitions and forced evictions betray the agreement reached by the Kenya Urban Road Authority, the Kenya National Human Rights Commission and the National Lands Commission to undertake a rapid Resettlement Action Plan.” The Executive Director Irüngü Houghton added that “the goal of adequate and dignified housing cannot be met by stripping the 30,000 inhabitants of the only housing, shops, clinics and schools they have. Demotion prior to the completion of the Resettlement Action Plan betrays the public trust and violates our laws”.

On broader level, the bulldozer solution exposes a more sinister governance problem. The Preamble in the Kenyan constitution envisions a country where citizens are “committed to nurturing and protecting the well-being of the individual, the family, communities and the nation.” The Preamble further envisions a “government based on the essential values of human rights, equality, freedom, democracy, social justice and law.”

The right to housing is enshrined in the Constitution of Kenya. According to Section 43(1)(b), every person has the right to “accessible and adequate housing and a reasonable standard of sanitation”. While there is no contestation that there are situations where people can lose their homes, as determined by the rule of law, to allow for public development projects, amendments have been made to the Lands Act to ensure that evictions are humane and does not violate citizen’s rights to dignity, right to life, and rights to security. The spirit and word of the law establishes additional measures for the protection of vulnerable persons in the society, including children, the elderly and persons living with disabilities.

We need a complete paradigm shift from war against the poor to war against poverty. Photo: Supplied

The failure of authorities to abide by these expectations in the supreme law of the land point to a deeper fundamental problem with the values underpinning our governance structures: the government is waging a war against poor people, not against poverty.  A major characteristic of these demolitions is that they target housing and small business premises, in low-income neighbourhoods, mostly informal settlements in cities and towns.

The phenomenon is diagnostic of the growing distance between political leaders and the citizenry. It epitomises the gap between the values and aspirations of the people, as captured in the constitution, and the governance system imposed by the elite leadership class mired in misgovernance and corruption. Governance, everywhere, is the way societies manages their affairs politically, and exercises power and authority. Bad governance has a profound negative impact on the lives of the poorest and vulnerable in the society.

Our governance systems have entrenched a culture of impunity, instead of a philosophy of Utu. A Human Rights Watch report on eviction of people amidst a COVID-19 pandemic and curfew exemplifies the impunity and dehumanisation of citizens. Officials from Nairobi Water and Sewerage Company evicted about 7000 residents, including children, from 600 households and demolished homes, churches, shops and schools, and destroyed people’s property. Residents were forced to light fires in the cold night for warmth and gather together, an aspect that exposed many to higher risk to COVID-19 infection. Residents were not only denied alternative housing but also subjected to threats of being arrested for breaking the dusk-to-dawn curfew that required people to stay at home or risk penalties.

While these demolitions are justified by the government under the pretext of reclaiming land for road construction, water and sewerage works; some have been linked to private business interests. The evictions have been linked to the Nairobi Metropolitan Services Improvement Project which is funded by a World Bank loan. Various analysts have also associated the unprecedented rush of evictions in Kariobangi and Ruai to pave way for expanding water and sewerage facilities, in anticipation demand increase after the completion of the Northlands City, a project owned by President Uhuru Kenyatta’s family. The Ksh 500 billion real estate development will occupy 11,000 acres and feature residential, industrial and commercial units hosting about 250,000 people. Northlands City is illustrative of how private business interests influence public policies.

We need a governance that genuinely advances pro-poor policies. While poverty remains a recurrent strategy for marketing the ambitions of political leadership, our governance processes have failed to deliver, especially for the poor. Well intentioned development goals like building of roads or modern markets or reclaiming grabbed or illegally allocated land fail to achieve desired goals because of inhumane and distorted implementation.

We cannot build an equitable and peaceful society, spur economic growth and development, or even formulate policies that are responsive to the needs of the people, when governance structures reek of corruption, inhumanity, and discrimination against the less fortunate in the society. Demolitions targeting households and small businesses, erode genuine efforts poor people have made to survive and lift themselves out of poverty in the absence of significant government assistance. Ensuing loss of lives, livelihoods and property, displacement and dislocation, keep families trapped in a cycle of helplessness. Sustainable development cannot be achieved when government policies oppress and disenfranchise the very populations it seeks to uplift.

Beyond the bulldozer trumpeted song of “they were there illegally”, participatory governance demands that to improve the assets and capabilities of poor people, pro-poor policy processes must directly involve poor people in policy processes. These evictions and demolitions are often illegal, conducted with no court order, no consultation, and no three-month advance warning and carried out inhumanely in the wee hours of the morning or late in the night. Pro-poor policies challenge the existing policy framework that drives and maintain poverty. Pro- poor policies underpin sustainable urban and rural development programs, humane national and county legislations and institutional reforms and ground good macroeconomic management. The ongoing policy of indiscriminate demolitions violate fundamental rights.

Related Topics:KenyaSocial justice
Up Next