In defense of the Westminster three
Advertisement 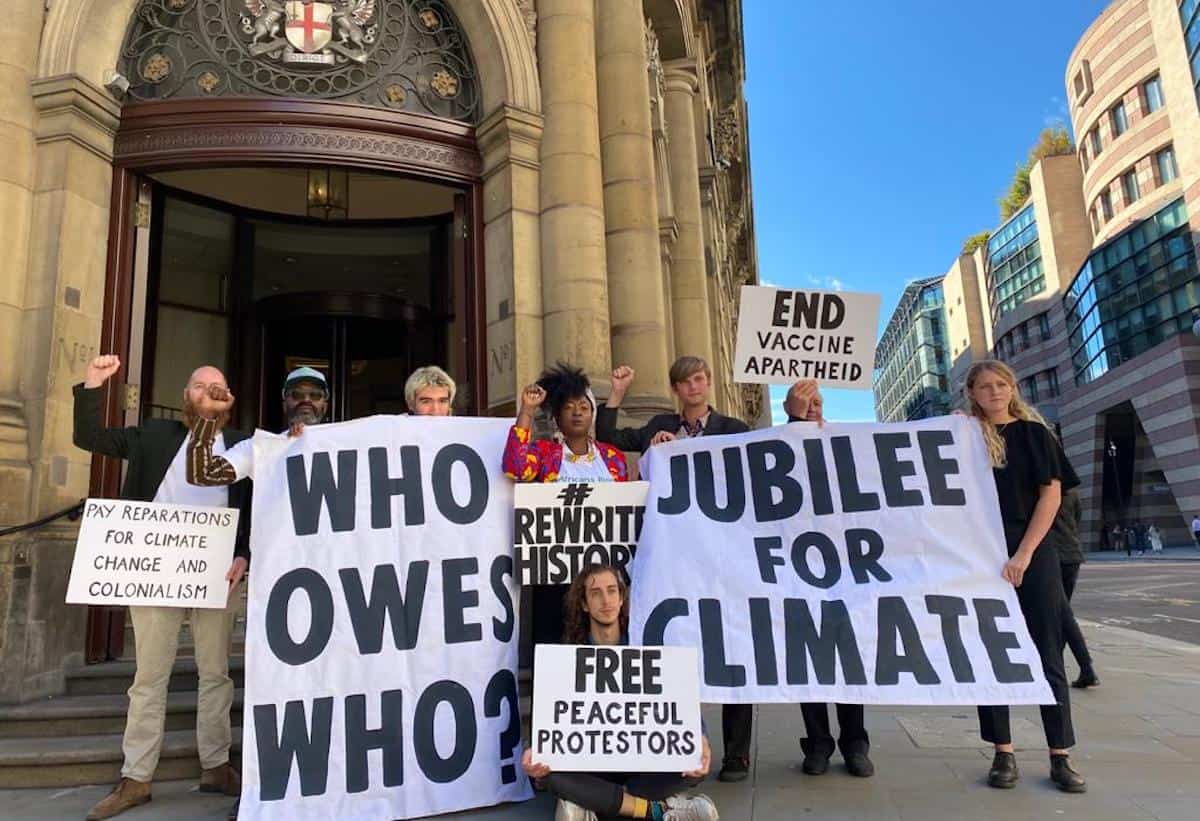 Update: On October 6th, after a full day trial with powerful legal arguments and moving testimonies, the district judge decided that she needed more time to come to a decision and they will reconvene the case on November 4th for either sentencing or acquittal. Take action to speak out in defense of the Westminster Three on social media platforms at #FreeTheWestminster3 and @AfricansRising

Africans Rising, a Pan-African movement of people working for Justice, Peace and Dignity, created the letter for their #ReRightHistory campaign, which calls for honest acknowledgment of the harm and human cost of slavery and colonialism, the legacies of which continue to have negative influence on the economic and political trajectory of countries across Africa, whilst undermining its ecological sovereignty. The text also demanded reparations to the victims of slavery and colonialism and the establishment of truth and healing commissions to enable full acknowledgment of the legacies of slavery, colonialism and ongoing systemic racism.

Rob, Daisy and Ben’s action was a reminder to the British government – the largest former coloniser in Africa and across the globe and a central player in deriving profit from human enslavement – of its responsibility in the process of restorative justice. On October 6th they will be acquitted or sentenced for their part in a renewed attempt to hold the UK accountable to the truth.

Legacies of colonialism and slavery.

Today, we all agree the dark chapter of human history marked by slavery was brutal. Enslaved people were deemed the property of other human beings, incapable of comprehending dignity and rights, thus undeserving of both, and subjected to untold deprivation and suffering. It is estimated that at least 12 million Africans were shipped across the Atlantic ocean and into slavery in the Americas and Caribbean between the 16th and 19th centuries – one of the largest enforced movement of humans recorded in history.

Conservative estimates place the number of African people who lost their lives during the trans-Atlantic crossing at 1.5 million. Many died from horrific conditions on slave ships, others threw themselves into the ocean and drowned in desperate attempts to avoid subjugation. Ships also capsized during voyages, and the ocean floor remains littered with bones that bear stories of pain, anguish and unimaginable suffering. Countless skeletons have already been eroded by the sea, disappearing from the reach of history. But every other day new records and scars of slavery are being unearthed, like the oldest known wreckage of a slave ship, discovered in 2005 on the floor of the English channel.

The Westminster three were arrested for hanging this banner on the UK parliament.

The abolition of slavery saw the extractive capitalist system renew plans to colonise the African continent, beginning around 1895 when European countries convened the Berlin Conference. This self-justified colonialism further augmented the economic base of Europe by allowing countries like Britain access to raw materials, cheap or forced labour, and overseas markets for processed commodities. The trade, shipping and banking empires of Europe and America owe a huge part of their development to the historical epochs of slavery and colonialism, periods of fast and sustained economic growth in European history.

The letter that Rob, Daisy and Ben now face up to six months imprisonment for attaching to the Palace of Westminster was written in the wake of the brutal killing of George Floyd in Minneapolis, Minnesota, USA, on 25th May 2020 – a killing which stemmed from deep-seated systemic racism that every day confronts African people (and people of color) in the diaspora. His last words ‘’I can’t breathe’’ gave voice to protests and marches against present and historic injustice. In that moment, demands by #BlackLivesMatter and allied movements calling for racial, climate and gender justice and economic equality reverberated across the world.

Today, the United Nations Economic Commission for Africa (UNECA) estimates that Africa loses $50-80 Billion annually to illicit financial flows (Actual figures are much higher). Multinational companies, many born in Britain, Europe or America, register to tax havens, often using British or American-made legal instruments, in order to shift profits and obfuscate where tax is due. Left in weakened financial positions, African countries have, over decades, borrowed huge sums of money under bilateral and multilateral arrangements that disproportionately serve the interest of the wealthy. More recently, African countries have been borrowing from private financial institutions. The long-term effects of this behaviour are now, again, becoming clear.

Two weeks after the Westminster Three climbed the UK Parliament, Zambia defaulted on debt service payments. In the past, shocks like this have destabilised regimes and impoverished millions of people. It is a reminder that poverty in the neo-colonial economies is manufactured – it does not fall from the sky.

The ongoing legacy of colonialism and empire is today made even more visible through the WTO ‘’TRIPS agreement’’ which needlessly and callously denies impoverished countries in the Global South waivers on intellectual property rights that would enable them to develop vaccines to combat the Covid-19 pandemic.

Throughout history, our species has moved towards and settled around resources. Early humans settled on lands that were capable of producing and sustaining life. Later, changing patterns of land ownership, economic conditions and the search for sustenance herded many of us into cities which had a higher concentration of industry and financial resources and more opportunities for work.

It therefore isn’t surprising that more than a century after the abolition of slavery, thousands of African lives are still being lost at sea. Every day African youth risk their lives attempting to cross the Mediterranean and search for better prospects in Europe, victims of forces both internal and external to Africa.

Countless more now flee hardship and deprivation caused by the changing climate that has rendered rich farmland into dry and unproductive soil. In certain parts of Africa, environmental changes have forced whole villages to relocate into cities where conditions are even direr.

The young Africans risking or losing their lives crossing the Mediterranean are literally running away from the legacies of colonialism and imperialism that inform their wretched conditions in hopes of accessing Europe’s concentration of wealth and opportunities. How many more lives does Africa have to lose? Is the ocean floor not tired of African skeletons?

You can arrest activists, but you cannot arrest the truth.

A few weeks after the Westminster Three were arrested, the UK Parliament debated the Police, Crimes, Sentencing and Courts Bill, in a hall not far from where the Africans Rising letter had been. If passed, this legislation will curtail freedoms of expression and protest and other rights and is so draconian that Prime Minister Boris Johnson recently made the disgusting comment that his Conservative Home Secretary in charge of policing, Priti Patel, was turning the UK into “the Saudi Arabia of penal policy”. Outrage over the bill immediately sparked a campaign to stop it: #KillTheBill.

The Westminster Three put their lives and freedom on the line in a defiant show of solidarity with the oppressed people of Africa. They posed no danger, and harmed no one. They simply spoke truth to power. They are on the right side of history. That they are being tried at all reminds us that what is legal and what is right are not always the same.

We applaud their courage and comradeship in our collective pursuit for justice, peace and dignity.

The article (In Defense of the Westminster 3) was originally published on Progressive International in the first week of October 2021.

Religion was once Ethiopia’s saviour. What it can do to pull the nation from the brink

Planned relocation: a hard but vital part of climate adaptation