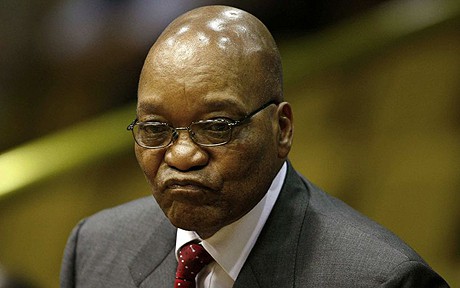 As South African President Jacob Zuma took yet another trip to Russia, the country’s institutions continued operating in a state of grave uncertainty. Not that Zuma seems the slightest bit trifled.

Just over a week ago, we saw Ivan Pillay of the South African Revenue Service (SARS) tender his resignation. Quite what the real story is behind the so-called ‘rogue unit’ within SARS is hard to tell. Smoke and mirrors and initial silence from former finance ministers Trevor Manuel and Pravin Gordhan have not helped us to get to the bottom of the saga either.

The extraordinary letter from former SARS spokesman, Adrian Lackay, to the chair of the Standing Committee on Finance, Yunus Carrim, which details how public statements often contained incorrect and misleading information, has been left dangling with not so much as a peep from Parliament or the executive. If the allegations are true, Moyane’s integrity must surely be questioned. But Lackay is out of the way, and so nothing will come of his allegations of bullying and distortion within SARS.

The Hawks we know now is in the hands of an acting head, Major General Berning Ntlemeza, who himself has been declared ‘dishonest’ by a High Court judge. Some political gymnastics were performed to rid the South African Police Service (SAPS) of Anwa Dramat on the grounds of his part in the rendition of Zimbabweans more than five years ago. Even though no action had being taken against Dramat in all these years, Police Minister Nathi Nhleko again did some fancy footwork in Parliament this past week, and is seemingly content having an untrustworthy head of the Hawks.

Those involved in grand corruption and organised crime could not have had broader smiles on their faces. Dramat gave up the good fight in exchange for a golden handshake – or was it a payoff, as some have suggested? Yet questions still remain, specifically as Robert McBride, head of the Independent Police Investigative Directorate, fights for his job too.

McBride has repeatedly stated that Dramat has been cleared of the rendition charges. So, might it be then that Dramat became too interested in investigating matters too close to the president, such as Nkandla, and therefore had to be booted out summarily? Certainly, Nhleko had no qualms about twisting and turning his version to Parliament, seemingly outraged and then this week saying he was ‘praying’ that South Africa with its ‘human rights culture’ would never see renditions again.

Oddly, this is the same minister who disappeared overseas during the xenophobic violence last month. Clearly that did not warrant the minister’s presence or prayers. It is also the same minister who does not seem to be in a hurry to engage with levels of brutality within the SAPS, or with his national police commissioner’s inability to do her job.

And then this week, out of the blue, the Cassim enquiry into Advocate Mxolisi Nxasana’s fitness to hold office was closed down without any reasons.

This enquiry has been threatening for over a year and was set down for six weeks. Apparently, insufficient security checks were done, and the question of the murder charges laid against Nxasana years ago reared its head. Either our State Security Agency has been sleeping on the job (also likely), or there was a deliberate attempt to sweep Nxasana’s past under the carpet. That is, until Nxasana himself started showing himself to be a touch too independent, maybe? Quite the appropriate time, then, to raise his so-called inappropriateness for office. Predictably, the matter has dragged on and the speculation is that Nxasana will be offered a payout in exchange for going quietly, as Dramat had done.

It’s a sorry state of affairs and somewhat undermining of the rule of law for the president to simply change his mind about the Cassim enquiry. Similarly, Zuma has been sitting on the Marikana Commission report for a while now. His explanation? He is studying the report and will then release it. When exactly?

So, if one takes the SARS matter, together with the fiasco regarding Anwa Dramat and now Nxasana and the vacillation regarding the Marikana Commission report, one gets the distinct feeling that the president’s primary pre-occupation is to protect himself from scrutiny. Whether this subordinates the rule of law and rational decision-making seems to be of little consequence.

And so the on-again, off-again enquiry fits the pattern of governing for narrow interests, now a hallmark of the Zuma administration. One has to ask for how much more damage our president will wreak on the institutions of our democracy as he seems incapable of putting the needs of the country first, and governs by stealth.

Quite separately, last week, the Democratic Alliance (DA) voted overwhelmingly in favour of Mmusi Maimane as its national leader. Dyed in the wool liberal Wilmot James never really stood a chance. The ‘runaway train’ campaign for a black leader had begun a while ago, and there was no stopping Maimane. It remains to be seen whether he is able to draw together the various strands of the party, retaining its core liberal constituency, while simultaneously reaching out to a new one. There is no doubting Maimane’s charisma, yet there are challenges and questions regarding party unity and his own depth on policy matters.

Zille, for all her faults and eccentricities, left the party in a strong position, able to build on its 2014 election successes toward the 2016 local government election. The recent victory for the DA Student Organisation at Fort Hare University speaks volumes about the possible shifts amongst young voters. The victory is significant, Fort Hare being in the African National Congress’s (ANC) heartland, after all.

Maimane will have to be bold and tread carefully at the same time as shaking off the ‘anointed one’ tag to lead from the front. It will be a tough ask to redefine the party as something more than simply opposing the ANC.