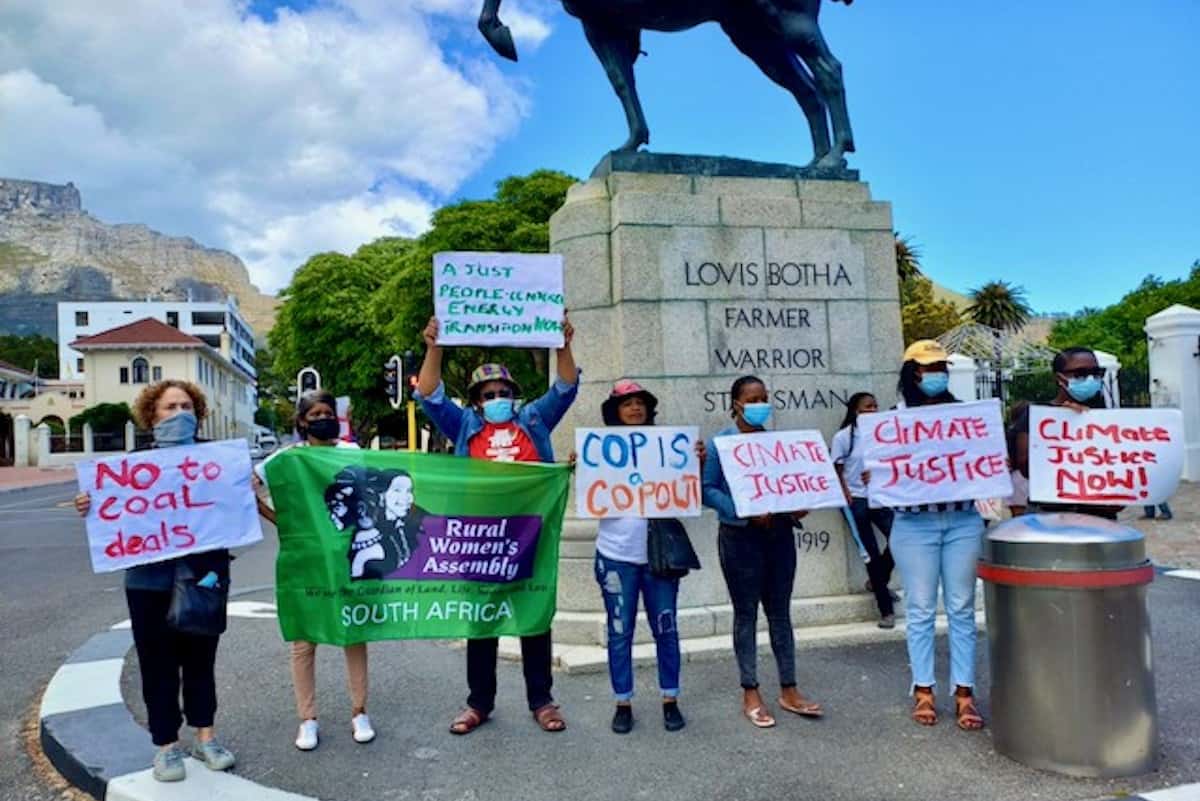 Dozens of climate justice activists gathered outside Parliament as part of a global day of action on Saturday.

“Keep coal and Mantashe in the hole”, “Government stop sell-outs” and “COP is a COP-out” read placards.

The picket formed part of a Global Virtual Protest to coincide with the 26th United Nations Climate Change Conference (COP26), which started in Glasgow, Scotland, on 31 October and will continue until 12 November.

The demonstration was also a joint call to action for the Southern African Development Community (SADC) by the Rural Women’s Assembly (RWA), which includes members from Swaziland, Lesotho, Namibia, Madagascar, Zambia, Mozambique, Malawi and Zimbabwe.

In a statement, RWA criticised the makeup of the COP26 meeting: “We foresee a COP26 without representation of women and girls, especially rural women and girls. This is, unfortunately, perpetuating a pattern we have noticed and spoken to in the last few years of the COP meetings and other such international meetings, where decisions about things that impact our lives are made.”

RWA called for a stop to greenhouse gas emissions, more solar and wind-powered energy, a human rights-based approach to climate change, and sustainable models of food production and distribution.

Carmen Louw of RWA said although most of the emissions are caused by larger industrial nations, such as China and the United States, Africa will be among the hardest hit by climate change.

“We need those countries responsible for the climate damage to finance the alternatives, but on our terms and not on their terms. In that way, we can become self-sustaining, use our methods, and ensure that our women farmers have decent incomes and livelihoods.”

“If there is no drastic change and there’s an increase in temperature, we won’t be able to farm with cattle and maize in a few years time. Our membership is reliant on small-scale production just for household food security and survival.”

Lungisa Huna, also of RWA, said given the severe droughts that have happened in the Southern African region, government cannot wait “for a catastrophe to hit” before it addresses the climate crises with urgency.

“For too long our government goes and sits in these air-conditioned conferences leaving the masses outside while they sign bilaterals and agree on COP without any changes that we can see on the ground.”

“We can no longer wait for declarations to be signed, and discussions with no decisions taken. We need decisions to be taken now, not in 2030 or 2050, because we are struggling today,” said Huna.

President Cyril Ramaphosa announced last Tuesday that the United Kingdom, the United States, France, Germany and the European Union struck a R131-billion deal with South Africa to accelerate its transition away from coal towards renewables.

Ramaphosa said South Africa submitted a revised nationally determined contribution (NDC) to reduce domestic carbon emissions to within a target range for emissions of between 420 tons of carbon dioxide equivalent (CO2e) and 350 tonnes CO2e by 2030.

(A carbon dioxide equivalent is a measure used to compare the emissions from various greenhouse gases based upon their global warming potential, according to the Organisation for Economic Co-operation and Development.)

“This revised target is compatible with the ambitious goals of the Paris Agreement and represents our country’s best effort to confront climate change, which will have a devastating impact on sub-Saharan Africa without large-scale mitigation and adaptation efforts,” said Ramaphosa.

Partner countries will mobilise an initial US$8.5 billion over the next three to five years through a range of instruments, including grants and concessional finance, to support the implementation of the country’s revised NDC.

Ramaphosa said for the transition to a low carbon and climate-resilient economy to be just, decarbonisation must be implemented in a way that promotes and sustains employment, livelihoods and economic inclusion for historically marginalised communities.

He said a joint taskforce will be established to take forward the partnership over the coming months.

FW de Klerk: the last apartheid president was driven by pragmatism, not idealism