Competition has intensified ahead of Zimbabwe’s 2023 watershed elections, and a major factor in the run-up to the polls is voter registration, particularly the youth vote. On 19 December 2021, Zimbabwe Electoral Commission (ZEC) spokesperson Joice Kazembe told The Sunday Mail that only 1,700 Zimbabweans had registered to vote in 2020. Kazembe revealed that only 2,857 had registered in 2021. The worryingly low voter registration numbers did not quite tally with fervent efforts by activists and social media influencers to energise young people to register to vote. Campaigners encouraged youths to register, providing free food and transport, and a number of lawyers were engaged to notarise documents as proof of residence, a requirement in the registration process.

The low registration figure attests to prevailing political alienation. All these inducements and hashtags have really encouraged young people to register to perform the most salient of their democratic duties – voting. With the election season fast approaching, there are fears that time is running out to mobilise the youth to register to vote.

Young people make up the largest demographic in Africa and Zimbabwe is no exception.

The Zimbabwe Human Rights Commission says youths make up 67.7 percent of the country’s 15 million population. However, their numerical advantage is not reflected on the voters’ roll.

According to the Election Resource Centre, youths make up only 44 percent of the total voters.

The low voter registration is not a coincidence, but a result of many systemic variables, which collectively demoralise and alienate the country’s youth. The polarised and volatile political environment in Zimbabwe discourages youth participation. Chief among those is the state of the Zimbabwe Electoral Commission, the institution entrusted with running the country’s elections. ZEC suffers from an acute credibility deficit. Since 2000, when the opposition Movement for Democratic Change emerged, every election has had a dispute which spills into the courts. The history of contested elections have resulted in young people losing faith in the electoral body, with serious doubts still lingering whether ZEC can hold an impartial and credible election.  It remains to be seen if ZEC has learnt any lessons from the recent past and the electoral body finds itself in a difficult position to win the trust of young voters to deliver a free and fair election.

There have been various social media campaigns pointing to the alleged inefficiencies of ZEC.  #DisbandZEC hashtag has trended on Zimbabwean social media, where young people were expressing their disquiet over flagrant abuse of processes in favour of the ruling party ZANU PF. “ZEC has passed the stage of giving us an explanation. That organisation must be disbanded. #DisbandZEC,” posted Eliard Kajume, a prominent social media user.

Kajume’s comments, which came after a “fraudulent” voters’ roll was leaked showing people’s addresses that had been changed without their consent, reflect the critical opinions of many young people in Zimbabwe. Such negative views of the presiding institution diminish confidence in the electoral process, leading to voter apathy.

Registration and voter apathy premised on violence and intimidation

Besides questions and doubts around ZEC’s fitness to run elections, there is general hostility amongst political parties, polarisation and violence, which is pervasive in the Zimbabwean society. The violence and intimidation alienates and discourages youth political participation. The frequency of “disappearances” and “abductions” inform Zimbabwean politics. The overt and covert violence has framed political participation as a preserve of the brave and there is evidence which galvanises this perspective.

Some of the most prominent cases include Joanna Mamombe (29), Cecilia Chimbiri (32) and Netsai Marova’s (27) case, which has dragged on from 2020. In February 2020, the trio went missing, alleged to have been abducted by state security agents.

In June 2020, four months later the three were arrested on charges of having faked their abduction. Mamombe and Chimbiri spent 60 days in prison. They were denied bail until they approached the High Court. Their case has been in and out of court, and the matter is still in court.

“Abstaining is not a solution”

Several other pro-democracy activists, journalists and opposition political members have faced similar harassment, intimidation and unfair arrests. The most recent is Makomborero Haruzivishe (29), a pro-democracy political activist who spent nine months in remand prison on charges of kidnapping with intent to incite violence. The nine months stay in prison was before trial, a situation described by analysts as a manifestation of political victimisation. Despite the tribulations he has faced due to his political participation, Haruzivishe, says more young people should be encouraged to join politics, either as participants or by simply registering to vote.

“It may sound complicated but it is a very simple issue. Young people just need to be educated and be told that on the ballot paper there is a better Zimbabwe.

“There is a need for education which explains to them that all the things they seek, like good healthcare, jobs, functional economies, there is a Zimbabwe that is inclusive where all young people can lead decent lives,” said Haruzivishe.

The opposition activist says despite the challenges, which may be attached to the voting process, abstaining is not a solution.

“It is just a message but it needs to be hammered, nowadays due to unemployment, due to depression we are seeing a lot of vices rising. Juvenile delinquency is high, crime rate is high, it is a sign of hopelessness.

“There are young people who have skills and talents, but for them to have a country they desire where there are opportunities for everyone, they should register to vote,” he said.

Politicians whose ideas are divorced from citizens’ everyday realities

The political activists and pro-democracy campaigners who have been engaged in mobilising voter registration says dishonest politicians and their failure to fulfil party promises could also be blamed for the disinterest and alienation.

Munyaradzi “Bloggo” Dodo, a Project Lead at Magamba Network, a new media non-profit in Harare said there is a long history of broken promises by political players who would have been voted into office. “What happened in these cycles, young people get mobilised and are treated as goats or cows by politicians to vote. Then after the elections, they are left out in the cold and they don’t see any tangible change.

“The things that people galvanise them to vote for are so divorced from the reality on the ground. The reality is that they just want water, power, food on the table and jobs and they are not getting that from the electorate,” Dodo said.

Dodo opines that the discourse around elections has drifted away from the realities and expectations of most young people.

“The conversations are ivory tower conversations. What is an economy to a young person in high density suburbs, it is an abstract concept when they are just trying to get their next warm meal. The pictures are being painted by the elite and well established people they get disconnected. 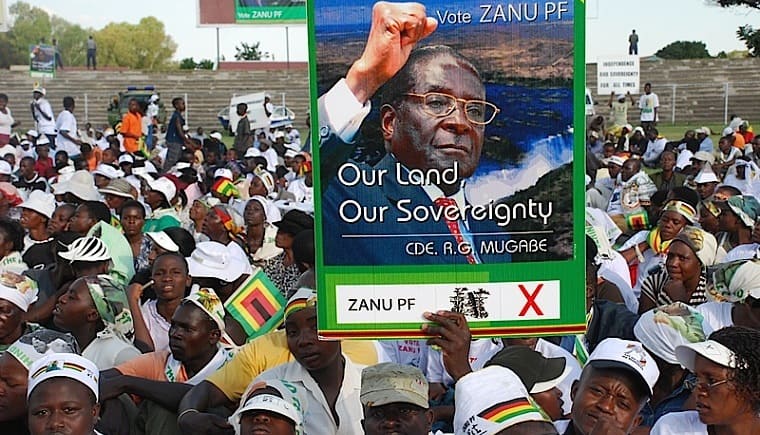 “To allow more youth participation, there should be more access to information. In other countries there should be a mainstreaming of legislative processes. From as far back as primary school, young people should be taught to understand how council works, how parliament works,” he said.

Dodo added that lack of opportunities in an economy can reduce political interest, especially in the voting process.

“There is need for more relatable engagement at a granular level, the most decisive politics should be at a local level, issues to do with access to water, access to electricity. At that level more people participate because it affects them daily,” he added.

Voter apathy favours the incumbent, but in Zimbabwe even the ruling party ZANU PF is seeking to have more numbers registering to vote. ZANU PF launched a five million votes campaign, where they are seeking to have five million people to cast the ballot in their favour.

However, for a party that got 2,4 million votes in the 2018 election, the party seeks to double its voter base.

With the way young people have slowly been registering to vote, doubling 2,4 million voter in the next election for the governing party will be a mammoth task.

“The youth are the owners of this country and nyika inovakwa nevene vayo (a country is built by its owners) and one of the results of the liberation struggle was the dispensation of democracy. So we are encouraging the youth from all sectors to register to vote because this democracy that we speak of, there are people who sacrificed for it, so we are telling them that it is important to register to vote,” said Chirau.

“We are also mobilising our structures which are around the country from the cell to say how many are registered and also to encourage the student community and miners to also register,” Chirau added.

Zimbabwe amended its constitution when it adopted Amendment number 2 in 2021. Among the clauses in the contentious amendment was the addition of 10 additional youth quota seats in parliament. The clause was adopted to enhance youth participation in politics and decision making. The proposal it is set to come into effect during the 2023 election.

However, even such a bold move may not be enough to attract the youth register to vote.