Making up our own minds: Reframing Africa’s history and reclaiming our future
Advertisement 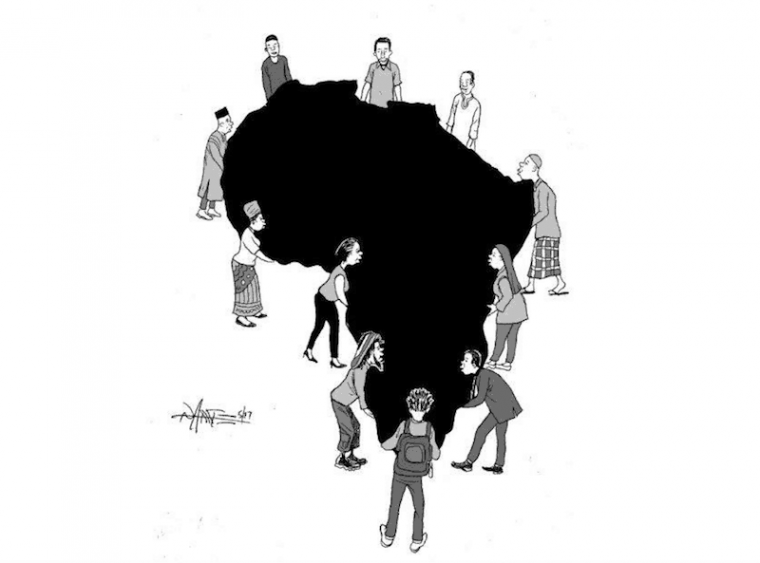 A few months ago, Brian Klaas, a fellow at the London School of Economics, called on the West to remove the “bums”, i.e. those leaders who, according to him, have overstayed their welcome. African democracy was nothing without term limits. The lack of context in this piece is overshadowed by an outright call for the overthrowing of sovereign governments. In 2017.

The Klaas piece came on the heels of an Economist article that basically called Africans ‘stupid’ for admiring President Paul Kagame and wanting to emulate the ‘Rwanda model’. The list goes on. But it is not just Rwanda. Everyone has become a Kenya expert overnight.

But surely these stories aren’t all bad, are they?

There are those who believe that producing ‘everyday’ stories about Africa and its people will cure the ‘enduring whiteness of media’. I disagree. Western media and democracy experts have always viewed Africa as the child that you clap for when she’s finished her breakfast, never as an equal for which substantial and nuanced political discourse is required. Nuance is the purview of power.

A case in point is French President Macron’s recent remarks on Africa’s civilizational challenges. Before I get to the content, is France not one of the drivers of Africa’s underdevelopment? A French state-owned company Areva has mined 150 000 tonnes of uranium in the town of Arlit, Niger – a third of the company’s total global production. Niger, in contrast, remains one of the most underdeveloped nations in Africa. The original deal between Niger and Areva gave the French company customs, revenue and other tax exemptions. When Niger tried to renegotiate the deal, Areva suspended operations. As journalist Ali Idrissa explains in an article written for African Arguments, Niger is not negotiating with Areva but with the French state. And the negotiation is never fair.

And then there is the CFA franc. Did you know that France holds a de facto veto on the boards of the central banks for the two CFA zones? Furthermore, the CFA franc facilitates massive capital outflows and hinders industrialisation and trade integration. This, in turn, causes and aggravates underdevelopment. But even given this context, you will still read a number of articles about the chaos that quitting the CFA would bring. Who do you think is behind this PR strategy? Hell, we have Africans defending Macron’s statements for free! How do you publish an article that asks us to put aside his racism to listen to some of his valid points?!

But France is not the only culprit, Tanzania recently fined British gold mining firm Acacia USD190 billion in unpaid taxes and accrued penalties and got $300 million., 16% stake in three mines and 50% of economic benefits. In 2017.

The US would require its own article. The West offers democracy as lip service. Does this mean that Africa has no self-made problems? Absolutely not, but the greatest challenges Africa faces are that of dignity and sovereignty; that of memory and language; that of discipline and self-reliance. From outright exploitation, there comes the new frontier of exploitation in ‘allies’. These include individuals and organisations who claim to support the liberation of “oppressed” people in return for great brand building, book deals and fundraising dollars. An ‘ally of The Gambia’ recently built a whole organisation through his “advocacy”. It is naïve to think that anyone helps Africa without self-interest.

You live because we let you

The common argument for Rwanda is that the country has only succeeded because of aid dollars. This is the epitome of self-aggrandizement. Rwanda is not the only country to receive aid. Why doesn’t every country that receives aid, succeed? It seems that if a country succeeds, it is because of the West; if it fails, it is always because of the leader at the top. Actually African countries are never true successes, this isn’t an exam we were meant to pass.

The fallacy that Rwanda is either an anomaly or a façade is being put out there for a purpose. What is democracy if it does not deliver for the people? What’s the point of a progressive constitution if people still vote along ethnic lines with leaders owned by corporate interests? Is this the democracy we want?

Rwandans have liberated ourselves from the shackles of Western affirmation and posturing. This has come at a price, as do all good things. We recently decided to increase the taxes on second-hand clothing in order to develop our local textile industry, eventually leading to a total ban. The US retaliated by threatening to remove Rwanda, Uganda and Tanzania (Kenya backed out) from the African Growth and Opportunity Act (AGOA) if these measures were not reversed. But here is the thing: Exports to the US from these three countries totalled USD43 million in 2016 while the US got USD281 million in 2016. President Kagame refused to back down.

Are human rights the purview of the West alone? Do we need someone to tell us that corruption is bad? Have we not seen its results? There is a Rwandan proverb that says, “The one that claims to love a child more than its mother, really wants to eat the child!” We should reject clichés about African countries that we know very little about. Part of why the dictator narrative is so attractive is that Africans have internalized centuries’ old inferiority complex. If the Netherlands is clean, it is normal. If Rwanda is clean, it’s a dictatorship.

By the way, I’ve never understood why cleanliness in Africa is seen as suspect. Cleaning up has always been part of Rwandan culture. In fact, many Rwandan proverbs centre on cleaning. It was only when we were ‘civilised’ that we became dirty.

President Paul Kagame digging drainages in one of the villages during the Umuganda Day. Photo by htt-pwww-paulkagame.com

Rwanda has come from far. I don’t think that I can accurately explain what it means to go from body-littered streets to what we have today, both in terms of human development and national dignity. Death by genocide is not a normal death; it is not even a ‘normal’ murder, if such a thing existed. It is extermination. Human beings cut down like rotting trees. Babies sliced out of wombs or banged against walls. Women so brutally raped that healing can never be whole. It means paying for the bullet that kills you. To paraphrase Dr Wandia Njoya, it is because we do not understand genocide that we think Rwandans use it as an excuse. She ends her long thread by calling on Africans to make up their own minds about African leaders and not rely on the rights organisations that have made it a business to stay in business.

Read: Who will develop Africa’s media and tell Africa’s story?

Make up your own mind

This piece is not an ode to Kagame, nor is it a whitewashing of Africa’s self-inflicted problems. But it is a call for the reclaiming of our history and the reframing of our own narrative. The West cannot understand the choices that Rwandans have made, nor can it understand our current outlook.

They obsessive focus on the length of time that some African leaders have served is a smoke screen. Africans play along instead of asking the real questions. Why do we continue to vote against our interests? Why haven’t neo-liberal prescriptions worked? Are there other options or a combination of options that can work for us?

The example of Libya should be ever present in our minds when we read calls for the overthrow of leaders via Western allies. In Rwanda, we learnt that the work starts the day the revolution succeeds. That’s why I resent the idea that democracy can be summed up in term limits.

To be clear, I am not calling on African countries to become Rwanda. That would be counterproductive. But there are things that we are doing right. One of these things is that we are determined to not let anyone else frame our story. You may have the Washington Post, but we have Twitter. Rwandans do not turn a blind eye to casual racism. We frame our perspective in history, in lived experience, in optimism for the future. We make our aspirations clear and we hold ourselves accountable. That is the legacy of Paul Kagame.

In closing, all Africans should understand the urgency of investing in the mediums that will tell our stories. Many have opted to stay away from politics – but politics affects you whether you agree or not. Writers of all genres, artists, bloggers, political activists – we need you! Would the real African intelligentsia stand up? This is the battlefield of our day.

This is part of a series of articles in partnership with Perspectives /Heinrich Böll Foundation, titled The (Un-)Making of Icons in Africa. The other articles can be found below:

Making up our own minds: Reframing Africa’s history and reclaiming our future

Making up our own minds: Reframing Africa’s history and reclaiming our future

Don’t Hate Me Because I’m Beautiful