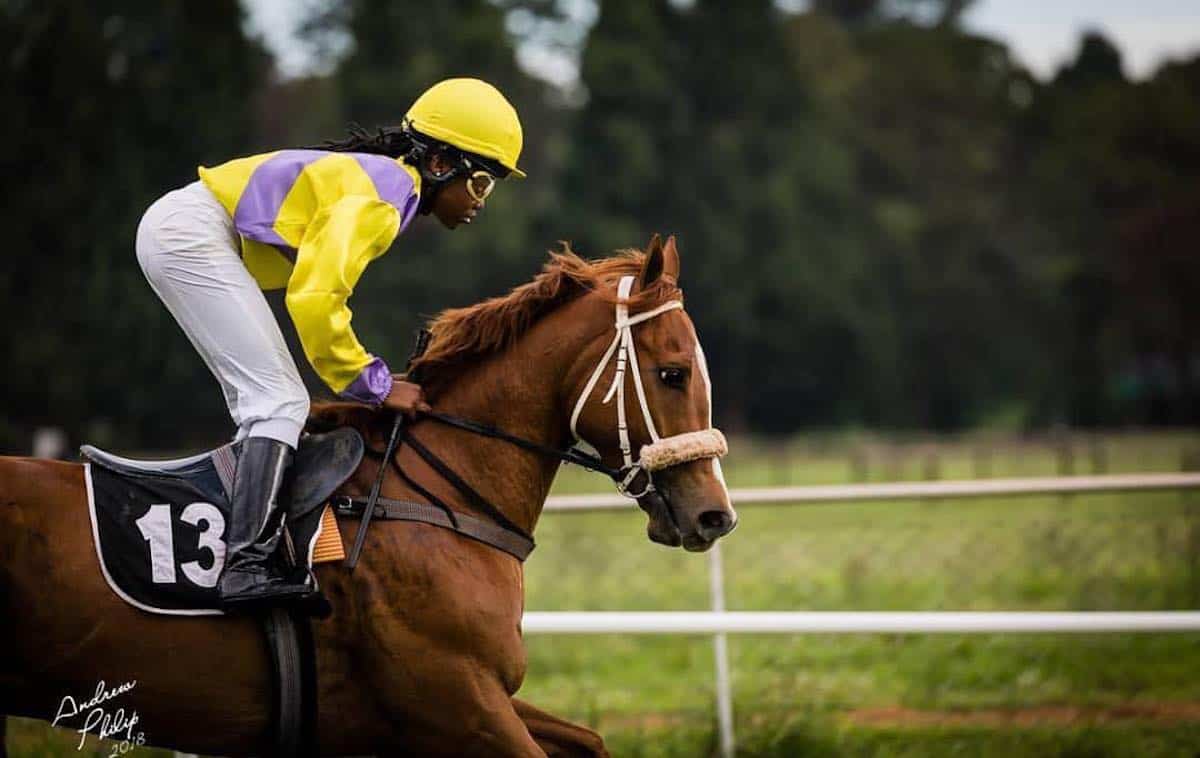 Orphaned at a young age O’Meara Chiedza Rusike’s journey to the racetrack started in 2016 when her adoptive father showed her an advertisement in the Herald from December of the previous year.

She told the Sunday Mail that she knew this was a path she was meant to explore, “Being a jockey was a calling because I knew nothing about it, except for Zimbabwe’s big race, the OK Grand challenge”.

“I was actually surprised when my father excitedly showed me the advert. I never thought of it as a serious profession but all the same, I instantly fell in love with it,” she added

Now in her third year of a five-year jockey apprenticeship in South Africa she is the only girl out of the initial five who stuck with it. The program is rigorous as apprentices must adapt to a mainly vegetarian diet to maintain the required weight that ranges between 46kgs to 48kgs.

“Apart from sticking to lots of vegetables, fruits and water, I take a 2.7km jog every day. For breakfast I take a slice of toast, an egg and black coffee with sugar,” she explained to the publication.

However, fitness is only a part of her regime, she must also adhere to a laborious schedule. “I wake up at 4,30am every day, go to the track from 5am to 11am. I then concentrate on the stables, meaning I have to brush, walk and feed the horses from 2.00pm to 5.00pm.”

Her first race took place in December of 2018 and an overwhelming experience for Rusike who came in 6th in a group of 13. “I was frightened but as I went down starting stalls, senior jockeys were motivating me, and it helped calm me down. Since then, I have raced four times.”

Her adoptive father Perseverance Ganga is proud for how far Rusike has come, “I am happy that she is now living her dreams.”

In fact, Ganga remembers a time when it wasn’t always a given saying that Rusike wanted to quit after a terrible injury when her horse lost control and hit the poles, “She wanted nothing more to do with horses but we encouraged her to soldier on. Now she is almost there…”

“Seeing her make history as the first black female jockey in the country makes me the proudest father on earth,”

Rusike hopes that although she is the first black female jockey in Zimbabwe, she won’t remain the only. In an interview in 2018 she told CTGN that, “I would love to encourage the other girls to come here because it’s a great opportunity it’s a great thing. Like you get to experience the other side and they should be scared or get intimidated by the boys. Because what the boys can do, us ladies we can do it better with determination”.