Who will sing for Zimbabwe? 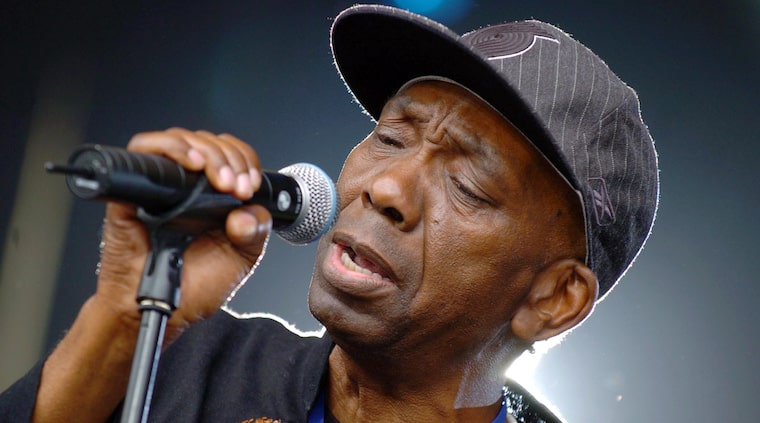 The opening guitar salvo is laden with intent. And then a cracking salutation: “Tchimurenga Zimbabwe! Long live Africa!” From one of the continent’s musical greats, this is a carnival in sound – the rumba guitarists strumming a confetti of triumphant notes.

Sam Mangwana recorded the album Maria Tebbo in 1979. On it, he included the highly charged political celebration ‘Tchimurenga Zimbabwe’, a soukous nod to the positive conclusion of the armed conflict in Zimbabwe and to the liberation of oppressed Africans. A victory song for the black majority. A return of the soil – ‘mabele’ in Lingala – which means both soil and/or breast/milk; soil, the breast that sustains the African.

As his name suggests, Sam Mangwana has Zimbabwean lineage (Mangwana is Shona for ‘morning’). His father was a migrant Zimbabwean and his mother Angolan. He is better described as a travelling African. What he did for Zimbabwe with ‘Tchimurenga Zimbabwe’ he went on to do for Mozambique with the album Canta Mozambique.

Sam Mangwana carried on the rich tradition of African musicians who feel the pulse of the liberation movement in another country and produce songs as pleas, laments or in jubilation.

Thomas Mapfumo released the album Zimbabwe Mozambique in 1987, the year after Samora Machel died in a plane crash. Both countries had by then attained independence but a civil war was raging on in Mozambique. The title track is an epic ‘big band’ composition. It starts off as a slow hymn of solidarity but then picks up tempo and stomps off into an upbeat, militant call to arms. But Mapfumo wasn’t done yet.

The following year he released the song ‘Kupera Kwevanhu’ (Massacre of the People) on the album Varombo Kuvarombo. The title translates as  “We don’t want a classist society”. ‘Kupera Kwevanhu’ is a mid-tempo cry on the loss of life in Mozambique during that period. The civil war continued, with heavy civilian casualties. Zimbabwe was involved in that war in a reciprocal gesture that mirrored the military assistance given by the government of Machel in the 1970s. In the 1980s, Mozambican refugees streamed across the border into Zimbabwe. Mapfumo sang for Mozambican souls just as Sam Mangwana had sung for Zimbabwean souls.

Seven heady years and the warm post-independence glow was slowly fading in Zimbabwe. Mapfumo had alluded to this in the title track of the album Varombo Kuvarombo, which noted the growing divide between the new rich blacks and the poor majority in Zimbabwe.

A turning point came with the Willowgate Scandal in 1988, when a number of government ministers were implicated in a scandal involving the reselling of imported luxury motor vehicles. Mapfumo responded by releasing the pointed single ‘Corruption’, sung in a reggae style, complete with a dub version. This was a direct shot at the fall from grace of once-revered comrades. This song was so popular that he added it to the album Varombo Kuvarombo and re-released it as Corruption. It was also a turning point in Mapfumo’s social commentary in his music and he became increasingly, and directly, critical of the government.

“The explosion will not happen today. It is too soon … or too late.” Franz Fanon in Black Skin, White Masks…

That was then; what about now?

Zimbabwe is burning and there are no songs to fashion the explosion. An undefined smoulder lingers. Mapfumo released Corruption and set native tongues wagging. As the rot set in, in the 1990s, his songs ‘Disaster’, ‘Mamvemve’ (‘Your Garment is Now Rags’), ‘Marima Nzara’ (‘Reaping the Whirlwind’), ‘Havasevenzi Vapfanha’ (‘Unemployment Blues’) and other musical indictments blended into background noise.

Junior Brown calls out the government for corruption and running down the state. Photo: Pindula

Small and random bursts of flames are shooting up from the ashes: A protest in Beitbridge. A national stay-away. Protests in Ruwa. Protests in Epworth. Defiance raises its head. One citizen complains that there is no planning; no end goal. Another retorts that spontaneity is not concerned with trivia. And the nervous state panics and sees third forces and hidden hands in every shadow. Frantic and futile efforts are made to shut down communication, to drive fear into this spontaneity.

Zimbabwe is burning. Who shall sing for Zimbabwe?

“I don’t want to alarm you unnecessarily”, he responded in a low tone. “But the times are a little uncertain. There have been some ugly rumours afloat and the natives are restless. Borneo, you know is volcanic in more senses than one.” JC Beecham, The Yellow Spider

What is behind the protests?

Incumbent governments in both Rhodesia and Zimbabwe have never reacted well to civil protests. The Rhodesian government maintained, to the end, that its natives were the happiest in Africa – and that only a few ‘terrorists’ were inciting unrest, under instruction from ‘the Communists’. The current government has also consistently blamed ‘the West’, primarily the British and United States governments, for funding and influencing unrest in this country.

Looking back in history, though, there is an argument for the civilians being agents of their resistance to the state. During the war for liberation, people with varying grievances, at the familial or community level, were more likely to support the guerrillas and listen to the spirit mediums, in the hope that a change in the prevailing system would result in an improvement of their personal circumstances. So, while being aware of the national fight against the Rhodesian colonial government, the motivation on an individual level was to relieve personal oppressions.

This state has progressively choked the means by which its citizens subsist. Photo: Ndimby Andriantsoavina

“The people were not just helping the guerrillas, but were attempting to address their own grievances, which did not always fit within the narrow nationalist conceptions of the latter.

Without denying that the peasants had common grievances against the central colonial state, Kriger shows that struggles within the peasant community played a crucial mobilising role in the independence war. She looks at generational, class and gender struggles, as well as conflicts between dominant and dominated lineages/outsiders”. M Neocosmos, p51, 2006

This state has progressively choked the means by which its citizens subsist. The decline of formal employment has driven a significant portion of the economically productive population out of the country. Of those that remain, many in formal employment have salaries that are many months in arrears; civil servants did not receive their June 2016 salaries on time; vendors in the city are routinely raided by the municipal police and their wares confiscated; commuter omnibuses lose daily takings to the ubiquitous traffic police; cross-border traders wake up to a statutory instrument that makes the source of their livelihood illegal. No organisation is required for these elements to ignite. Not when the head of this state can casually mention that this predicament could have been avoided, but the state ‘lost’ US$15 billion.

In a timely portent of the current unrest, one of the new generation of musical artists, Jnr Brown, released a bold single, ‘Tongogara’, invoking the memory of the late Josiah Magama Tongogara, the celebrated liberation war commander of the Zanla Forces. On the single, released on 12 February 2016, he calls out the government for corruption and running down the state; the luxury enjoyed by the few elites in power and the poverty suffered by the rest of the country; and the desperation and despondency of the youth. While this song references the past, it could well serve as an anthem for Zimbabwe’s current woes:

Hanzi the rich get richer, zvichingofaya,

Manje with nothing to lose totono hugger block,