Borrow do not steal: Louis Vuitton strikes again this time leaving behind the Maasai shuka for the Basotho blanket 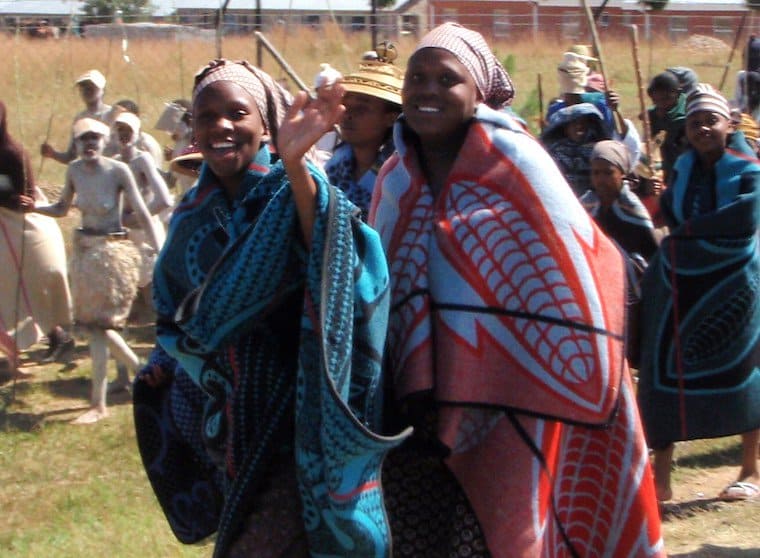 Louis Vuitton has again met with criticism this time from South Africans, after turning the culturally significant Basotho blanket, into the latest fashion trend for men. For the Basotho, the blanket signifies a sacred ritual and normally does not go for more the R1,000 ($77) much less than the Louis Vuitton hefty price tag of R33, 000 ($2,553).

Local designers are questioning whether Louis Vuitton should be profiting from the Basotho culture and whether this is cultural appropriation or appreciation.

Well-known local designer, Maria McCloy, said it is outright theft, as the Basotho people were not involved in the process.

“African artists are also artists and designers. We also have names. It is not just something blank that everyone has the right to come and take,” she said. “So I think we are angry because we feel exploited. It’s not just that they are inspired by us. That’s a compliment, but you need to take it a bit further and involve us otherwise its theft.”

The Basotho blanket to this day is closely linked with the milestones of Basotho family life:

–  Boys preparing for the circumcision ritual don a special fertility blanket known as a moholobela. After the ceremony he’s considered to have reached manhood, and wears another kind of blanket, called the lekhokolo.

–  On the occasion of his wedding, a man wears a motlotlehi, and he presents his wife with a serope when their first child is born.

–  Before her wedding day, a woman spends a great deal of time trying on and selecting blankets for her trousseau. Women’s blankets are quite different to men’s – they are designed to be pinned over their bosom whereas the men pin them to the right shoulder.

–  There are also special occasions in the Basotho’s national life where blankets symbolize the particular event. For instance, on Independence Day or National Tree Planting Day, a man of substance may wear not one but three blankets, namely the Torch blanket, a Victoria and a Sandringham.

“Glocalisation” the mix between globalization and the local

Whereas many would disapprove the borrowing, in whole or in part, of elements of culture oftentimes these elements where themselves appropriated at some point or morphed into their current state from an outside influence. Popular culture has always relied on cultural appropriation and many instances of African culture result from contact with the rest of the world.

A blanket was presented to the then King, King Moshoeshoe I in 1860 by a man by the name of Mr. Howel. The King was by all accounts quite taken with the blanket (“a handsome railway wrapper made of light blue pilot cloth, heavy and hairy”) and wore the blanket in preference to his then neglected traditional leopard skin karosses.

Even the Maasai shuka; the famous red and blue checked robe, the shuka which is the cultural identity of Kenya’s and Tanzania’s Maasai; which in 2012 Louis Vuitton was also accused of exploiting for their Spring/Summer men’s collection is another cultural garment that had its origins in tartan introduced by Scottish missionaries and traders. Before the region was colonized, the Maasai would have worn cow skins reddened by soil.

“There are many instances of African culture that are themselves the result of Africa’s contact with the rest of the world — Dutch wax print, seshweshwe and maskanda music. These are African not because they are originally African, but because they represent the African creative consciousness of improvisation. They are African because they have been given new meaning and life in Africa. Therefore, what needs preserving is not ‘African culture’ but Africa’s limitless ability to improvise,” says Author Hlonipha Mokoena, an associate professor at the Wits Institute for Social and Economic Research.

Borrow, do not steal

Who gets to decide what is culturally appropriate and according to whom?

Designers often use culture as a muse to create new trends, but sharing the profits is rarely part of the business model. And, there is a concern around the commodification of African garments and prints that hold deep meaning to local communities.

South African trend analyst Nicola Cooper believes fashion is by nature an exploitative industry. “Fashion has always used culture, subcultures, and countercultures to sell garments — from hip-hop to skateboarding to gender fluidity or androgyny, S&M or sadomasochism, to feathered headdresses, Catholic rosaries and wax print. And it is not just luxury brands that are doing it, fast fashion constantly appropriates. This is how fashion has always operated. Unless there is a seismic shift in the very framework that is the fashion industry, this will not change,” says Cooper.

In the fashion industry, top brands Vivienne Westwood and Stella McCartney of Britain, Australia’s Sass & Bide and Italy’s Ilaria Venturini Fendi have been running initiatives and working with African communities to create patterns, prints and designs inspired by the cultures of the indigenous people.

But such initiatives have led to controversy. In the past five years we’ve seen international luxury brands like Louis Vuitton commit repetitive appropriation of culture from the continent without the people whose culture they ‘plunder’ profiting or benefiting from it.

Hlonipha Mokoena says, “Pop culture relies and depends on novelty for its viability and appeal. The problem comes when pop culture borrows from black culture for the novelty value, and as one writer put it, doesn’t even contribute to the replenishing of this stock of black creativity.”

The tradeoff between “taking” and “benefiting” is a difficult one to ascertain, especially since what is usually being “taken” are ideas and images that are not subject to traditional copyright conventions.

“The reason why so many cultures are susceptible to being ‘appropriated’ is that there is no protection against this,” Mokoena says.

Cape Town, designer Thabo Maketha said it is not just the global brands that need to rethink the way they profit from African prints because there is demand for these locally-inspired, international products.

“For centuries now the West has been taking from Africa. There are two sides to this. The positive aspect is yes, Europe designer’s houses are looking at Africa and taking from our cultures. It shows the world is interested in what Africa has to offer. The downside is, of course, they are making a profit out of it; there are people locally who are consuming those goods,” she explains.

African communities are however finding ways to be active beneficiaries of this growing appropriation and safe guard their communities’ interests. One such example is the Maasai Intellectual Property Initiative lead by Kenyan chairman and elder Isaac ole Tialolo. The initiatives aim  is to create an assembly of Maasai elders trained in intellectual property who would act as a legal body negotiating with companies via a licensing agent, to enable the group to develop its economic rights.

Whether or not it is right to borrow and use other people’s ethnic cultures is up for debate but it becomes problematic when it is not acknowledged, when the cultural implications or connotations are not upheld and when the culture that is lending parts of itself is not benefiting from it.