Can you rock the boat? The debate about whether size matters 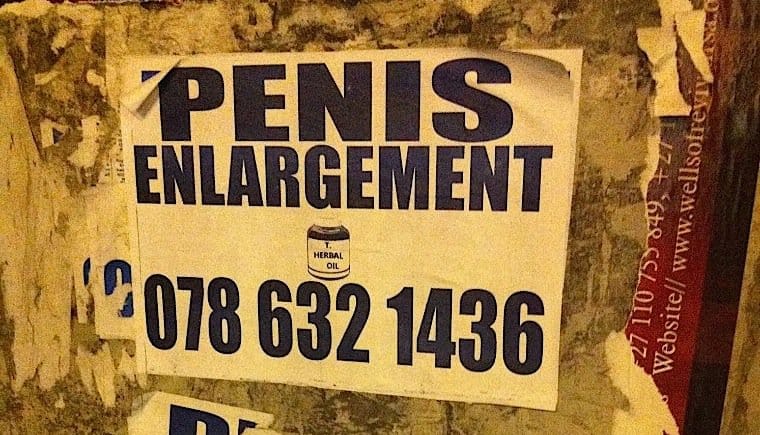 The widely held notion that African men are the front-runners when it comes to penis size has influenced the expectation of women of all ethnicities across the world. The unintended consequence of this belief is that the supposedly well-endowed men have also come to believe that their packages are all they need to satisfy their lovers. It has also led to the proliferation of misleading surveys and “studies” flooding the Internet and social media newsfeeds and reinforcing a superficial competition between groups and nations. A recent article published by the British tabloid Daily Mail (although it did not purely focus on package size) featured several countries and revealed that Nigeria was the “most sexually fulfilled” African country. This information probably reinforces the beliefs of those who share the “size matters” sentiment, but it fails to clearly explain what it practically takes for one to qualify as an excellent provider of sexual pleasure.

The media often provide advice columns for women on how they could and should perform better in the sack. Besides placing the burden on women – giving them the responsibility to ensure that their needs are met in bed – the media often preys on the sexual identity of women as sexual beings and victims of body-shaming. It never ends with “You are beautiful, love yourself”. No! It goes all out to provide tips on the various ways in which you may improve yourself to maximise satisfaction. This pressure extends to men too, although this aspect is not as widely publicised. In a world that is fixated on penises (one of the gazillion side-effects of patriarchy), it is hard for men who have size issues to simply be happy with what they have. This insecurity manifests itself in a plethora of ways, from misogyny to a toxic hyper masculinity, and it further widens the gap that exists in potential understanding between the genders on issues of intimacy.

Read: The future of sex in Africa

In a world that is fixated on penises (one of the gazillion side-effects of patriarchy), it is hard for men who have size issues to simply be happy with what they have.

It is unfortunate that instead of exploring ways for people to be more comfortable with their sexuality, shortcomings in men are mainly spoken about for comic relief or ridicule. When it comes to women, the lines fade because their lack of pleasure is mostly left to them to figure out. When a woman is confident about taking a firm position on her sexuality, she is more than likely to be called various disparaging names.

Men are not immune to the effects of prejudice either. Average-sized men are expected to “work harder” in bed to please their lovers because they want to prove that size does not really matter; what is important is what you do with what you have. However, the assumption that bigger is better continues to be peddled. One could call it one of the most effective forms of false advertising.

Having tools versus using tools

“The thing is, a big pipe offers more to work with.” So said a woman I interviewed on this topic. However, does endowment automatically translate to maximum pleasure? The answer to this question speaks to the subjective realities of the person answering it. The truth is that there are plenty of men who strut about, thinking they are God’s gift to women because they get an ego boost whenever they pull down their underwear. Unbeknownst to them, they must put in work to get crowned. Some are oblivious to the fact that they are not the best performers because so many women are socialised to be no more than pleasure vending-machines, with no feelings and desires of their own.

Men and women are generally not taught that it is acceptable and within their rights to openly discuss their sexual relations in the same manner that they would talk about politics or entertainment. Cultural and religious reasons are also used to justify the lack of openness on the issue of sex.

Cultural and religious reasons are also used to justify the lack of openness on the issue of sex.

So women stay quiet about what we long for and console ourselves by focusing instead on our partners’ other good qualities. I spoke to a man who said: “I love my girl; she’s amazing. I can always get the freaky stuff elsewhere.” This kind of thinking results in an unfair compromise for the couple. Sexual chemistry (note that I am talking about chemistry, not frequency) is of the utmost importance in a relationship, and anyone who says otherwise is either lying or in denial. It is one thing to look good or to have the goods, and another thing entirely to truly work it out in earth-shattering ways.

One thing about these studies is that they promote laziness in bed and an unwarranted cockiness. They are no different to telling that friend who is terrible at singing that they have a great voice instead of being clear that you mean their speaking voice, not their singing voice. The unescapable reality about stereotypes is that they are born of common traits and behaviours. This does not mean they automatically become the universal truth by mere statistical evidence alone. A great tool collection means nothing if its sole purpose is to bask in its display, without any demonstrated practical expertise to validate it. When I consider how common and plentiful these subjective “studies“ and lists or surveys are, I am always curious to know how selections are made and whether there are any control studies to compare them to. My guess is, there are none.

Related Topics:Sex education
Up Next

Twitters latest trend might help you find your match #FindLoveWithKholi