Coming to America and the “othering” of black people 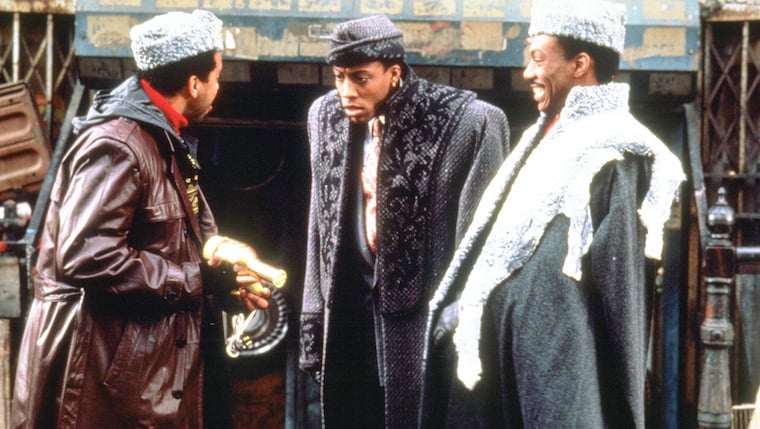 A camera pans over a thick forest, and then zooms in on a huge palace. Elephants roam outside the castle. The song “Mbube” by the isicathamiya group Ladysmith Black Mambazo is playing. Black people are dressed in suits but some are wearing clothes with animal print or Egyptian attire. It’s not clear where in Africa we are.

It is the 1980s and Africa is “modern”, yet a film about Africa depicts it as a jungle where black women are seen as nothing but sexual objects. These are the images that are reproduced about Africa in the 1988 romantic comedy Coming to America.

“The film is a mishmash. You’re flying over a jungle but there are elephants, which begs the question: Are we in a zoo?” said poet Myesha Jenkins, who was part of a panel to discuss the film at the Black Portraitures: Reinventions: Strains of Histories and Cultures conference, which was held at the Turbine Hall in Johannesburg, South Africa, from 17 to 19 November 2016. The conference brought artists and activists together to re-imagine the state of blackness and discuss different ways of documenting the black body.

At the heart of this discussion were such question as “How do Americans portray Africans?” and “How do Black Americans also participate in the ‘othering’ of Africans?” The film under discussion was directed by John Landis and is based on a story originally written by actor Eddie Murphy, who stars in the film.

The panel of inquiry, made up largely of artists and filmmakers, included Tshego Molete, Sifiso Khanyile, Nathi Khumalo, Myesha Jenkins and Madala Thepa, cross-examined the way in which Africa is represented in Coming to America in the hopes of strengthening relations between black people in the Diaspora and those residing on the African continent.

The film is a mishmash. You’re flying over a jungle but there are elephants, which begs the question: Are we in a zoo?” Photo: Video screenshot

The film was heavily criticised for portraying Africa as a country; one giant space where there was no location specificity yet the scenes set in America mentioned the different towns the characters were in very specifically.

There was certain type of Africa that the filmmakers were yearning for, one that doesn’t necessarily exist.

Scrutinising the film with a critical eye, the commission highlighted that there was something culturally abominable about the film and that there was a certain kind of Africa that the filmmakers were yearning for – one that did not necessarily exist.

For instance, the panellists made reference to the way in which the idealised Africa that the film portrayed was not based on any available reality; for instance, South Africa was in turmoil in the 1980s and black people lived in arid townships with no trees in sight. Most importantly, none of them had ever seen or been in a palace. The Africa in the film is not real and reflects nothing more than a desire to recreate Disneyland in Africa.

“I didn’t get the sense that the place was African. If I’d been younger I would have thought it was part of America and assumed it was a fantasy land,” said filmmaker Tshego Molete.

The film also distorted the way in which monarchies were built in Africa and presented women as nothing but servants who existed only to serve men. “This was the 1980s and African women weren’t like this,” said Jenkins.

Molete concurred with Jenkins, adding that the image of Africa as a woman has been overdone. “The image of a naked woman who’s ready to serve men is not new. Eddie Murphy was doing the same thing white producers do,” said Molete. “In fact, we know that this film was made by white producers as well.”

The film was lambasted for portraying black women as having no agency, whether in Africa or America. For example, when the protagonist gets to America, the portrayal of black women is the same – they are either man-eaters or submissive women waiting for marriage to bestow status on them.

“From the outset there was no social responsibility on the part of the filmmaker,” said filmmaker Sifiso Khanyile. “It’s very patriarchal and the women have no agency. It’s very top heavy and there’s no nuance.”

Wasn’t the commission being too harsh – after all, the film was a comedy? an attendee from the floor asked. Another member of the audience responded that being a comedy did not absolve the film from scrutiny.

“It’s not enough to say ‘it’s just comedy’ because black bodies are always the butt of the joke,” said Pakama Ngceni. “Why don’t white men make fun of themselves as Vikings?”

Coming to America is not unique in its depiction of Africa, black women and black people in general. There have been many other films, including The Heart of Darkness, and other media that tell the story of Africa through a patriarchal and colonial gaze.

What does Africa look like and how does it show itself to the world?

The central question in this session was how Africans can find different ways of representing blackness. What does Africa look like and how does it show itself to the world?

A conference attendant highlighted the need to take time off to look at the world through a different lens and to be able to cultivate different ways of being black.

A Pharaoh breaking away from tradition