The fast-rising UK based Zimbabwean writer, Andrew Chatora, has a second novel in the wings. It is set to be released soon on November 30, by his US Publishers: Kharis Publishing. Already, I can stick my neck out and declare that the forthcoming Where the Heart Is is, partly, ‘a novel of ideas.’

Just like what we witnessed with Chatora’s first novel, Diaspora Dreams, the latest novel will surely throw the readers into irreconcilable camps because the men and women in this story are not always sharing the same ideological pedestal. And the men, too, are not always agreeing with one another.

The story clearly expounds on and explores a particular debate; when the native leaves the periphery (Harare) for the centre (England) for a long time, due to economic reasons, does it make sense for him to want to return to the periphery once more?

You may also ask; is this homecoming or second coming, really possible? Are people really able to fully return to their source without sparking contradictions? The man who returns, why does he return at all? Or, to what does he return? You may go back to the source physically but is it viable economically, spiritually and socially?

But there are some in our midst who may say, wait a minute, even if going back to one’s country from the diaspora is difficult, could it be viewed as an entirely wrong thing to do, if one wants to? Which one is one’s country?

Well, Fari Mupawaenda tries to return to good old Harare from England and through him, the novel sparks a storm.

When it finally hits the market, Where the Heart Is, is going to be one of the very few novels by a Zimbabwean that fully imagines the joys and hazards of a physical return home from the diaspora. Olley Maruma tries it with his text Coming Home (2008), but I think his main character does not leave behind any stake in the UK. His is the return of a post pubertal man. Stanley Nyamfukudza tries it with Aftermaths (1983), but he is only working on the matter in one short story from a whole collection. Sekai Nzenza Shand tries it with Songs to an African Sunset (1997), but her work did not get much circulation.

The diaspora-based literature by Zimbabwean writers rarely thinks about this crucial reverse trip and its subsequent rich psychology. It is often assumed that it is easy to return because one was born here, anyway. 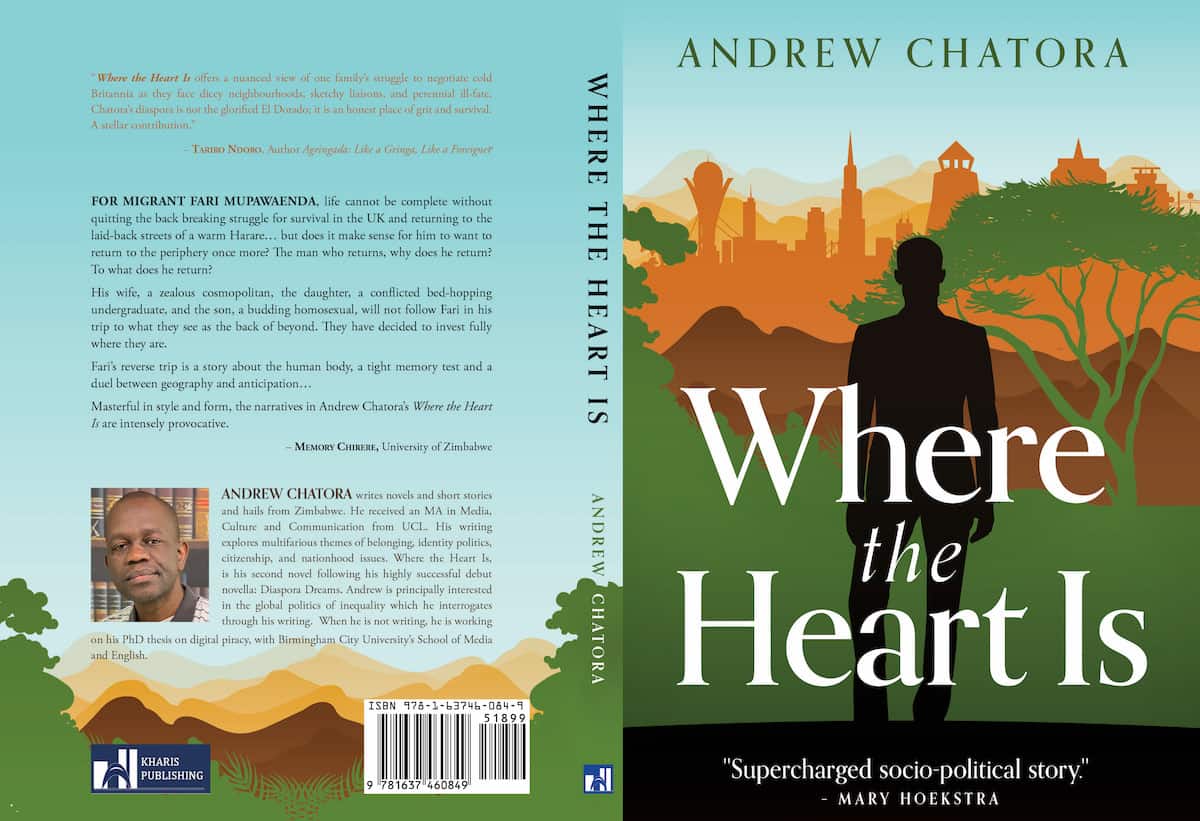 Yet, as dramatized here by Chatora, the reverse trip is also a story about the human body, a memory test and the struggle between geography and anticipation. During this reverse trip, the traveller is actually carrying heavier and multivarious cargo than during the first outward trip.

In Fari’s case, part of his crucial cargo has actually remained behind in the UK. His wife, a zealous cosmopolitan, the daughter, a conflicted bed hopping undergraduate and the son; a budding homosexual, will not follow Fari in his trip to what they see as the back of beyond. They have decided to invest fully where they are.

Fari is convinced that whatever he achieves in the diaspora should only make adequate sense only if one returns to the source. He constantly judges people and things around him from the point of view of a country that he has long left behind. And yet he has changed.

I enjoy the underlying suggestion that Fari is both right and wrong in trying to return. That is the strongest lesson that I took away from this novel. If you return you are damned. If you don’t return, you are damned too!

I also want to call Where the Heart Is, a ‘thinker’s novel’ because you can never read it and not re-examining issues like culture, distance, centre, periphery, family, love, sex, marriage etc etc.

The author also uses sexual intercourse as an extra language of unity and disunity, and this will set tongues wagging.

The article was originally published on KwaChirere   on November 8, 2021 and is published here with permission of the writer.

Where the Heart Is, is Andrew Chatora’s second novel after Diaspora Dreams which was published by Kharis Publishing in the US.

In Harare, copies will be sold by Book Fantasticks Booksellers reachable on: