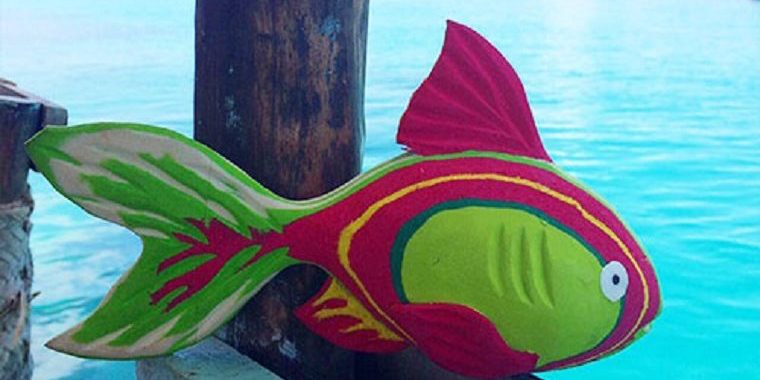 Ocean Sole founder, Julie Church, first encountered the problem of flip flop pollution in Kiwayu, a small island situated in the Kiunga Marine National Reserve. The extent of flip-flop pollution washing up onto the beaches everyday on the Island was immense, thereby creating an environmental calamity for the marine ecosystem and local communities. Church, inspired by the colourful toys children made from these flip flops encouraged the community to use this example to create colourful products and art pieces.

According to its website, since its formalization in 2005 Ocean Sole has cleaned up over 1,000 tonnes of flip-flops from the ocean and waterways in Kenya. The enterprise has helped provide an income for over 150 low income families, and contributed over 10% of its revenue to marine conservation programmes.

“We turn flip-flop pollution into art and functional products to promote conservation of our oceans… Our pieces represent the trash found in the oceans and waterways that are killing human and marine life in their journey from the dumps to the beaches.”

The organisation, and Watamu Marine Association has also coordinated the Kenya coast cleanup on the International Coastal Cleanup day (17th September) for several years. The clean-up runs along the entire coast of Kenya from Kiunga in the north to Msambweni in the south.

“Over three billion people (worldwide) can only afford that type of shoe,” says Erin Smith of Ocean Sole, a conservation group and recycling collective to CNN. “They hang on to them, they fix them, they duct tape them, mend them and then usually discard them.” The average lifespan of a flip flop is two years, she adds.

Read: Commemorating World Environment Day: Are You With Nature?

“We are actually receivers of pretty much the rest of the emerging world’s marine pollution,” Smith argues. A significant quantity of discarded flip flops, approximately 90 tons a year ends up on the east African coast from Asia, India and China

Ocean Sole sculptures are a colorful reminder of the damage being done to our oceans and marine life; a statement shipped to Rome Fashion Week in 2008, the Swedish Cultural Museum in 2010, London Zoo in 2013 and placed in the hands of Pope Francis in 2015.

Funny captions of Cardi B childhood meme as used by Africans

Finding love in an online place: Queer digital dating on the African continent