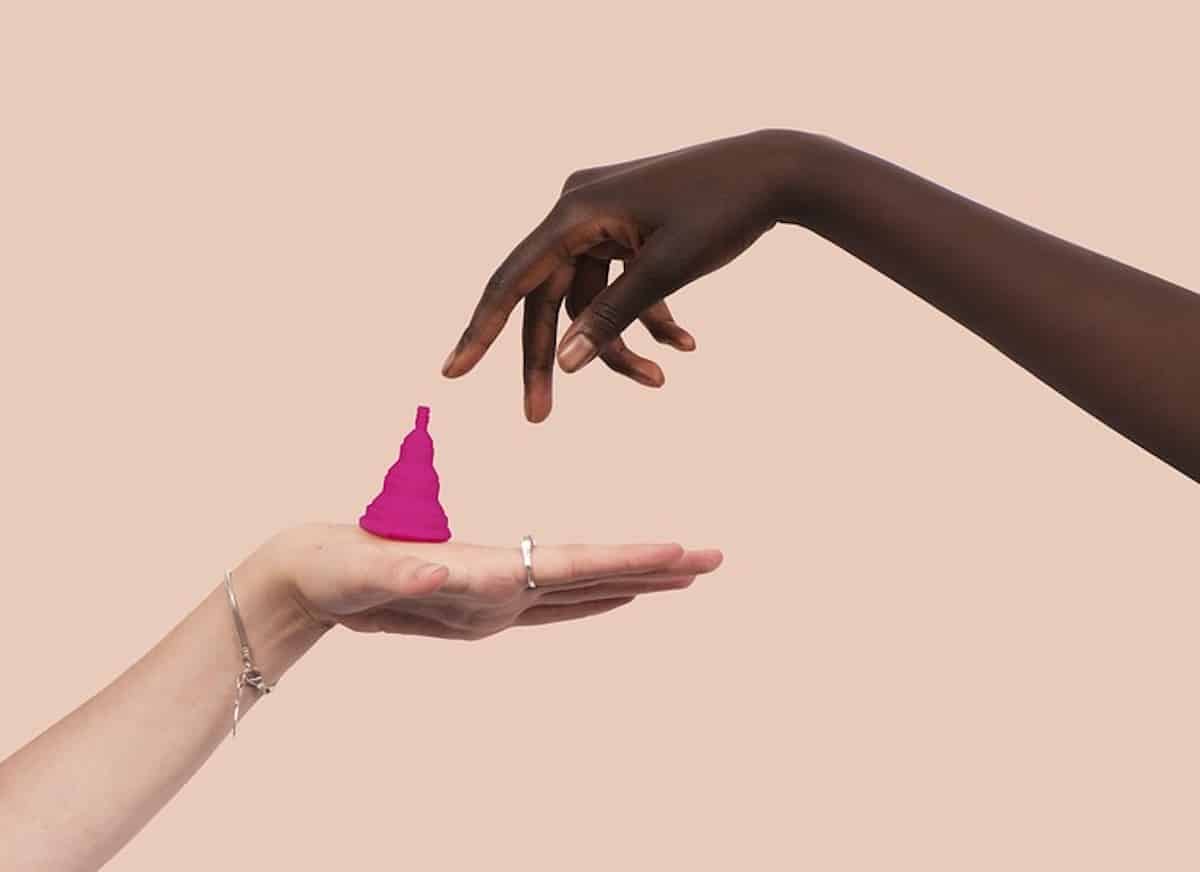 Many women are only now hearing about menstrual cups from social media and ‘cups crusaders’ in their peer groups. Google searches for “menstrual cup” are up 800 per cent over the past ten years, as one recent BBC story pointed out. Videos and demonstrations have become common place online as more and more women explore this new frontier and share their experience.

We are all aware that menstrual hygiene management is a challenge for many women across Africa. Disposable options such as sanitary pads and tampons are expensive, leaving many women and girls with no option but to use rags, sponges or for those that can afford it cotton wool, during their period, putting them at greater risk of bacterial infections. A lack of sanitation at schools also leads to many girls staying home during their periods or dropping out altogether when they start menstruating.

Even so, reusable options are more viable in the fight to end period poverty. Furnishing women and girls with care packages that contain disposable options only equips them for a month whereas reusable options could equip them every month for one to ten years.

“In any impoverished set of circumstances… or anywhere in low-middle-income countries, people really struggle — women and girls really struggle to be able to manage their menstruation,” and menstrual cups can be a part of the solution, Penelope Phillips-Howard, senior author of the study which analysed 43 international papers said to CNN.

What is a menstrual cup?

For those who are only now hearing about it, a menstrual cup is a soft, bendable, egg-sized, bell-shaped cup, typically made of medical-grade silicone. It works by being folded(there are various ways to do this with the C Fold being the most popular) and inserted into the vaginal canal, where it “pops” open to catch menstrual fluid. Inserted correctly, it suctions to the vaginal walls to avoid leaks and should feel undetectable.

Users can keep it in for up-to 12 hours before dumping out the content as it doesn’t have to be removed while urinating or during bowel movements. It will not pop out during either as it needs some muscle movement to lower it and for the user to physically pinch as far up the cup (as close to the top rim) as possible and squeeze it for a few seconds to give the seal time to break. Once removed the user must rinses it off or cleanse it as per the products hygiene specifications before reinserting it.

Why are women not keen?

Everyone from academics to marketing experts echo that the reasons why women are reluctant to make the switch to menstrual cups are that: Women are outrightly disgusted by the idea of handling a menstrual cup, nervous about changing it, puzzled about proper insertion and usually have heard an account of someone who tried it and it leaked.

Also because of the nature of a woman menstrual cycle women are more likely to stick to what they know rather than venture out. How do you convince someone who has used sanitary pads every month since primary school to now consider inserting a cup instead?

Allow me as a ‘cup crusader’ myself to help debunk some of these misgivings and give you a more wholistic account of both the advantages and disadvantages of cup use.

Cost effective: Most cups are designed for long-term use providing a significant cost savings over tampons and pads. On average a cup can range between $20 and $40 for a cup that could last up to 10 years before replacement. Even for users that advocate for annual replacement the cup is still significantly cheaper than the monthly purchase of pads and tampons.

Eco-friendly: Menstrual cups provide 12 hours of continuous protection, compared to disposable alternatives that must be changed every few hours. There reusable nature means, there’s less waste to clog up our landfills and fewer trees sacrificed to make the paper-based alternatives. CNN reports that, one cup produces an estimated 0.4% of the plastic waste that single-use pads build up, or 6% of that created by tampons in the span of 10 years, according to calculations in the review.

Saves water: A menstrual cup “hardly needs any water, so it’s very good in arid areas,” said Camilla Wirseen, CEO of the nonprofit The Cup Foundation, which provides menstrual cups and education to girls in parts of Africa.

No odour: No more embarrassing menstrual odour because the fluid doesn’t get exposed to air as it does with pads and tampons. Nor do you have to contend with scented alternatives that just make the odour more distinct.

Maintained Vaginal pH and beneficial bacteria: Tampons absorb all your vaginal fluid along with the blood, which may disturb the delicate pH and bacterial balance in your vagina.

Fewer visits to the supermarket and no more stranded moments: Even if you replace your cup once a year, you’ll still make 11 fewer trips to the shop than you would if you used the disposable methods. Additionally, you don’t have to worry about running out of supplies or anxiously calculate how many pads/tampons to carry when leaving the house.

More time between changes: You need to change tampons every four to eight hours, depending on flow. You can go up to 12 hours with a menstrual cup before emptying.

Comfortable and supports active lifestyles: When inserted properly, you shouldn’t feel its presence at all. Imagine it! No strings, no diaper-esque squelching and wetness not to mention the heat rashes and soars some products inflict. You can also go about your activities without reservations- yes even swimming!

The main qualm with cups is the invisible bacterial biofilms that could potentially build up on menstrual cups over time, inherent to their reusability.

A study in the journal of Applied and Environmental Microbiology, claims that in rare cases a common infectious bacterium linked to Toxic Shock Syndrome can remain on the cup, regardless of model or composition, even after being washed as advised. This could be because staphylococcus aureus forms a compact biofilm when it comes into contact with a menstrual cup and can subsequently become resistant to basic water washes.

However, this can be easily avoided as authors advised menstrual cup users to invest in a second cup to allow for sterilisation in between uses by placing the used cup in boiling water.

The other disadvantages surround the cups general use i.e. its messy, the learning curve for insertion and removal can be long and the some people have problems with the cleaning and maintenance.

The good thing is these can all be resolved over time as the user interacts with the cup and their specific menstrual dynamics. Peer advocates are always a great source of information as well. Everything takes time so when in doubt reach out to an experienced user instead of dismissing it as a viable option because once you get the hang of it you won’t look back!

In July 1935, Leona W. Chalmers alias Leona Watson filed a remarkable application at the Philadelphia branch of the United States Patent Office: a funnel-shaped receptacle of vulcanised rubber inserted low into the vagina to collect menstrual fluid, rather than soak it up like a Kotex pad did. Chalmers’ tediously named “catamenial appliance” was so paradigm-busting that it was never fully appreciated in her own lifetime or yet, in ours.

The Pacific Standard reports that, the less glamorous aspect of Watson’s touring career was that, while she was “barnstorming” from stage to stage, she faced the challenge of how to avoid menstruating all over her angelic white dress. In her time the bulky straps, suspenders, and girdles that kept pads in place would be glaringly obvious beneath a delicate gown. Watson and her female castmates avoided this by rolling up scraps of fabric and manually inserting them, creating something akin to homemade tampons.

Decades later, the widowed Leona Watson Chalmers would cite those gruelling six-day weeks of theatre life as the inspiration for the ‘Tassette’, the first commercial menstrual cup.

Passages of Chalmers’ 1937 book, The Intimate Side of a Woman’s Life read,“Frankly it is well worth a trial, because this little device appears to be the best solution to the problem of sanitary protection. “

“It eliminates belts, pins, napkins, and inconvenience … furthermore the device does not have to be removed in answering a call of nature. It is truly a Godsend to professional and businesswomen.”

In fact one of ‘Tassette’s’ first ads that appeared in Photoplay magazine in 1937 stated, “Mrs. Leona W. Chalmers invents invisible protection … so comfortable you’ll never feel it … so secure you’ll always be at ease!” the copy read. “IT TOOK A WOMAN to ease women’s most trying ordeal.”

Despite the invention promise Chalmers’ invention her product failed to endure no less because a male Denver physician named Earle Haas pushed her off the track by patenting an already existing menstrual solution. His competing product: the “catamenial device” would become the world’s first commercial tampon and applicator.

Related Topics:InnovationMenstruationWomen’s rights
Up Next