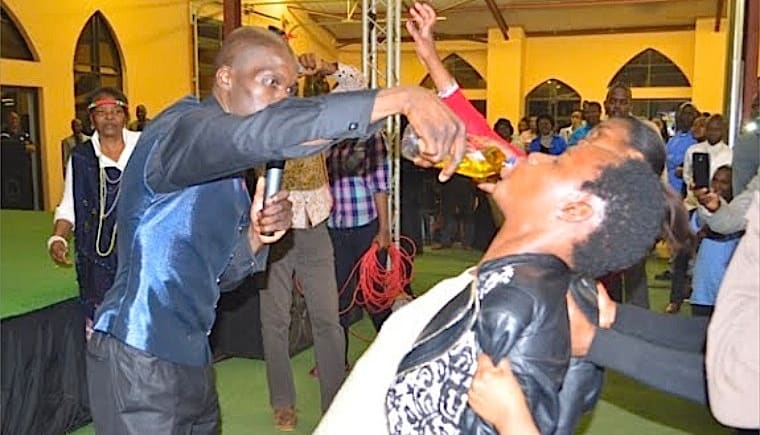 1. Be vague when you speak, but always optimistic especially when prophesying. Say things like ‘the woman in red underwear…’ ‘There is a man who has been having bad dreams…’. And always remind them that Jesus is coming, soon, like Paul said double a millennium ago (ref. 1 Thes. 4:16-18). He’s coming alright…soon and very soon… and like Boy Scouts we should be prepared, he should find us in church, behaving so he doesn’t have to send us to hell.

2. Be docile. Unless you disturb the shaolin-Masowe meditating at a shrine, Christians are not violent, there is nothing so holy you would die for; even the guys who walked with the guy who walked on water wouldn’t stick their necks out to join him by the guillotine when death, the gateway to heaven, was offered. Remember the true mark of a Christian is to be docile. Hell, say shit about Jesus you won’t have to worry about how to watch the news with a Boeing in your living room. But the other guy…Cassius Clay…

3. Avoid smart-mouths. Especially those you went to school with who wear ties you wish to be allowed to touch even in the shop. A smart-mouth will smile smugly and complain about jetlag then ask you what you do now. To which you will answer, ‘I am now a prophet,’ to which he will say, ‘I didn’t see that coming!’ And you will be surprised because you are now famous and he should know, and in genuine shock exclaim: ‘How come you didn’t know?’ and he will say, ‘How come you didn’t know that I didn’t know?’

4. A prophet receives messages by ‘revelation’ but everyone else expects you to know when Bob is going to die. And a prophet who doesn’t ‘see shit coming’ is likely to be branded an opportunist feeding off gullible minds. See how many assholes TB Joshua has now after everyone went at him after the Satanists removed the ‘A’ from SCOAN and replaced it with an ‘R’? That’s a bombing to the letter, by Satanists funded by big-dollar tobacco moguls who didn’t want TB curing people of cigarette addiction just by touching their TVs. I’ll tell you who else lost money from that snafu: the guys who make touch-screen TVs. The Satanists man, the goddamn Satanists!

5. Give people value for their money, like a guy I know. I don’t care if people ‘sow seed at the holy-man’s feet’ on his birthday (no…no you porn-damaged fruit, they don’t masturbate in church!), but that man knows how to make people search themselves on his behalf. He puts thousands of black people in Borrowdale every week. We need more blacks there than the dead wood which composes a Cabinet. I watched that guy raise a sweet mill from pledges in one of the roughest times of our lives just so he could be on God TV, at prime time. That white man came to Africa with a guitar and now he wants to build a university. I don’t care if he lives in America on Zimbabwean tithes, they have the coolest church since cathedrals.

7. Learn the rules. Remember what Strive Masiyiwa said, ‘every game has its own rules, learn the rules of money’. The first rule is don’t tell a man whose money you need about your need, tell him about his, convince him you are the solution and he will pay, tithe, or offer anything. Learn the rules, and the language, do not pronounce prophet like profit, and you certainly do not bribe God, you make offerings to appease his good nature.

8. This can never be overstated: make people happy to give you their money, even if it’s a million just so you can be famous. And earn more tithes…yeah-yeah their immortal souls too. Think for them, everything you say is supposed to come from the Bible…which they all own but they still need you to stand in front and read it in an awe-inspiring voice while they agree, ‘Amen pastor, yes, yes pastor…yes…ah.’, roll on the floor, flash you with the eye between their thighs, kneel for you to lay hands on them, then say: “Your faith has made you well, but this regular supermarket cooking oil is now more expensive because I put it in a phial with my sticker on it. And this tap water I prayed for didn’t turn to wine, but if you splash it around your house you will ward off things you can’t see; like ghosts and evil spirits”.

9. You will need to be a great orator, bring things alive. An orator with the mental acumen to bend multitudes to come to church with no underwear on so ‘God’ can ‘enter’ them, or queue up and drink petrol; and swear it tasted like apple juice and I am not going to argue with their taste buds.

According to the Kenyan Daily Post, Reverend Njohi of the Lord’s Propeller Redemption Church advised his female congregants to remove their underwear before coming to church so that Christ could freely enter their bodies with his spirit.

10. Keep your distance. You can’t just let everyone get to you, you have to be inaccessible even though you are ‘their pastor’, like a president. You are on God’s mission, his son’s vicar’s-vicar’s-vicar’s vicar, if you choose to trade in Catholicism, so you always have shit to do, shitload of fucking sinners running around on Saturday night whoring and snorting, snoring on Sunday instead of coming over with bloody tithes. Death assurance, it’s only 10%-of-what-you-earn premiums, in exchange for immortality. Damn right they ought to pay up, make them feel guilty for having fun and that fun-money will be your fun-money.

11. Hone your acting chops, and read the script. Remember, a score of rastas in an airtight room for a week can come up with Shakespeare, but one lemming can sour Gogol. A strong script can be ruined by a bad cast. You need your team in top form, it’s a live show so it’s one take. Out of work actors are good for cameos but in this business we call them exorcisms and healings. I can never stress enough the importance of learning the language, it’s Grace, not extortion or bullying that you either accept Jesus’ love or burn in hell. Also keep your wife in check, or cheque…it becomes embarrassing when you speak ‘fire!’ onto situations in the lives of others but can’t save your marriage…

12. Make men gay for Jesus, teach them the meaning of neighbourly love, teach those wankers to love their neighbours as they love themselves…

After Ferguson, my feminism will never be the same