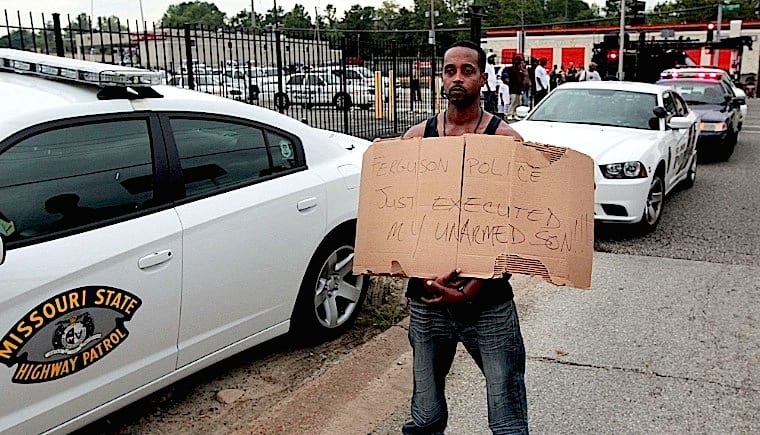 In the United States of America, Michael Brown, a young black man, is dead. The man who killed him, a white policeman, will not be punished. There is fresh mourning. Michael should not have died, and neither should any of the roll call of black people whose lives have been ended by the police.

In Ferguson and St Louis, Missouri, there have been over 100 days of organised protest and civil disobedience. Well-coordinated and peaceful in the face of regular provocation, a movement has grown up that seems young, inclusive and strategic. But despite the best efforts of protestors, the system has remained purposely deaf to their messages, and has bent itself to protect its own interests.

‘The system’ is White America. What is White America? It’s the vested interests that keep the prison system stocked profitably with young black men (and women too), as shown by Michelle Alexander in The New Jim Crow. It’s the audacity that says that native Americans could be killed or later sidelined but that those who arrived after the Europeans, whether enslaved or migrants, could not expect equal status and rights. It’s the propaganda that says that America has the moral authority to carry out drone strikes or military actions wherever it will, regardless of the innocent casualties. It’s the mindset that says white is default and everything else is other.

Time will come for this empire to fall, but right now it’s throwing up its inhumanity for all to see. As young children turn to their mothers and say it’s OK, don’t worry, we will stay safe by not leaving the house, it’s clear that things cannot stay as they are. There are many ways of showing solidarity and support, whether you’re in the African diaspora in America, are a black American reader, are a white American or have been following the story from elsewhere.

1. Share the truth. If you use social networks, find some of the good work that has been done to illustrate how flawed the investigation of Michael Brown’s death has been from beginning to end. American lawyer Lisa Bloom has been breaking down what was wrong with the grand jury trial against Darren Wilson on Twitter – for example: “An attorney who does not aggressively cross-examine the target of an investigation is an attorney who does not want to get to the truth.” Meanwhile Shaun King at Daily Kos has been highlighting inconsistencies in the positions taken by police since Brown’s death: “Are you aware that the medical examiner didn’t take pictures of Mike Brown’s injuries because the batteries ran out of the camera?”

You can also share statistics about black deaths in America, and the incarceration of black populations. Why is the mood music from the powers that be about a restless, violent black population when in fact, as writer Mikki Kendall points out: “Crime is down. Being a cop isn’t even one of the top 10 most dangerous jobs. This dystopian crime ridden war zone is literally fictional.”

There is plenty of information out there if you look – an excellent starting point is to sign up for Ferguson organisers Deray and Johnetta’s movement newsletter. Johnetta’s article about how she became deeply involved in the protest is also good context, and the open letter published by Deray on behalf of protestors on the grand jury decision. This analysis from St Louis journalist Sarah Kendzior for Politico is also informative.

2. Highlight hypocrisy. Where someone is calling out protestors for minor property damage, and they are protesting the repeated killing of black people, there is an issue not just with proportion but with double standards. If black people get angry on the streets it gets called a riot, if white people do it, it’s a spirited celebration. If a black person is shot, they tend to be smeared (“he was belligerent”, “he was on weed”, “he was a thief”), whereas a white person who shot them is at worst disturbed and in need of help. In one case, there is a quest to find out the worst – as if not being perfect makes you a valid target for execution anyway – and in the other to find the best.

3. If you are a white reader, especially in the USA, but also outside, educate your friends. Let them know how bad things are. Give them the statistics but, even more, try to make them understand what it would feel like for people to fear for their lives and their children’s lives, and to have to live with distrust, fear and suspicion going about their daily business. Explain that this, far from being some radical movement, is a struggle for basic civil rights that still continues. Explain that Martin Luther King protested calmly, and peacefully, and was still silenced by a gun, and that black lives in 2014 are not in emotional or judicial terms accorded the same weight as white ones.

4. Tell stories that give hope. White America seems monolithic and is certainly lacking in reflection overall, but there are some who understand that things are rotten, and some of these are in positions of influence. A group of US Army veterans called the National Guard to stand with the protestors of Ferguson rather than against them, referring to the issue of “rampant police brutality in America”. The National Bar Association has also condemned the trial.

Celebrities have spoken out too, from Beyonce and Solange to Pharrell, and while it’s a shame if the only way a message can get through about institutional prejudice and persecution is through celebrity endorsement then… so be it. Some, such as Grey’s Anatomy actor Jesse Williams, have given the movement not just their endorsement but their full support.

One of the images posted by a group of US Army veterans called the National Guard to stand with the protestors of Ferguson. Caption reads: The police are undeniably using extreme violence on peaceful protesters, violating their constitutional rights

5. But don’t be under any illusions about the entrenchment of systemic racism and oppression in the US – any decision that is being celebrated by the KKK (which yesterday’s decision not to indict policeman Darren Wilson was) is clearly the wrong one. The horror of “black bodies swinging in the southern breeze” feels current, not far from a century later. Even the plea for police to wear cameras to record their actions feels hollow when you realise that the choking and death of Eric Garner in New York was captured on camera, but still went unpunished.

Deaths such as the shooting in the face of 7-year-old girl Aiyana Jones and just this week 12-year-old boy Tamir Rice for having a toy gun just emphasise how the use of deadly force against black people with impunity is an almost unquestioned part of American modern culture. Not only can black deaths happen, but they are mocked, and black families trolled. The #PantsUpDontLoot hashtag and billboard adopted to make fun of the #HandsUpDontShoot campaign by protestors against Michael Brown’s death is just one example.

Meanwhile, the ongoing militarisation of the American police and treatment of city neighbourhoods as warzones will only make tensions worse in the short-term, so lobby against it, and get everyone you know to do so too.

6. Engage with follow-up movements. NoIndictment.Org is the place to find information on activities following on from the ruling. If you are not in the area but are in the US, you can join in an action that hits the wallet of corporate America, such as #BlackoutBlackFriday.

7. Don’t fall, or let others fall, for the complacency of history – everyone loves to refer to Martin Luther King and Nelson Mandela and their peaceful protests that were clearly always going to end in a victory for justice and have been sanitised and Hollywoodised over time… Yet often the same people suddenly go deaf if you try to tell them about the motivated leaders of modern civil rights movements. Challenge them on this.

8. Figure out your relevant form of solidarity. Twitter user Amba Azaad tweeted about ‘aligning with blackness’ and how people in India could help, for example. Work out how your privileges and behaviour could make a difference, directly or indirectly.

In the words of the Ferguson protestors: “We march on with purpose. The work continues. This is not a moment but a movement. The movement lives.”

This is just one small take on how people can work toward an America where black lives matter – please add your own ideas and thoughts, and if you’re in America and would like to write about Ferguson, black deaths or the struggle for equal rights, then please get in touch with This is Africa.

A woman holds a sign reading “We are Michael Brown” in Ferguson amid police presence. Photo: David Broome, UPI