Anniversary of Biafran War shuts down activities in Nigeria 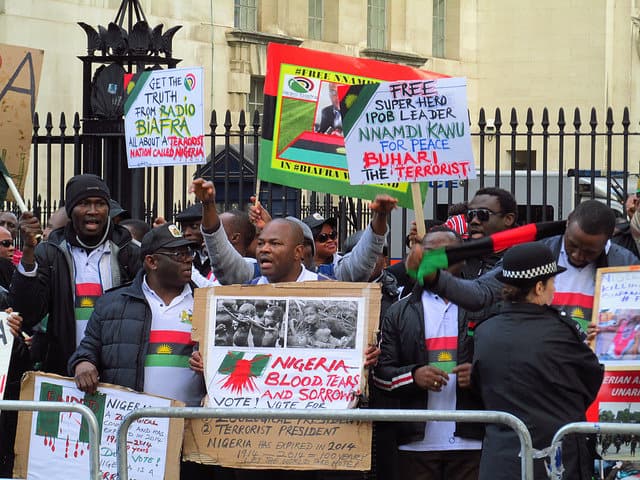 The Biafran War was already brewing in the wake of the pogrom in 1966 of more than 30 000 Igbos living in northern Nigeria and the migration of 150 000 to 300 000 who fled the bloodbath in the North to East Nigeria. A few months after these events, on 30 May 1967, Colonel Odumegwu Ojukwu, the then governor of Eastern Nigeria, declared the region an independent state. This followed the refusal of the then Nigerian head of state, General Yakubu Gowon, to go on with the Aburi Accord. What followed was a bloody war that led to the death of more than 2 million people.

Nigeria is sharply divided along ethnic lines, with the Igbos, who are mostly Christian, dominating the South-East and parts of the South-South and Muslims dominating the northern part of the country. More than 250 ethnic groups exist in Nigeria.

On 6 July 1967, war broke out between the federal government of Nigeria and the secessionist Biafra. For 30 months, aided by Britain, Israel, the US and the former USSR, the federal government waged a war against the newly declared Biafran Republic. The latter fought with locally made rifles and ammunition, with little or no support from any foreign government aside from France and a few small African nations, like Tanzania, Zambia and Gabon.

Every year on 30 May, pro-Biafra groups in Nigeria and all over the world celebrate the anniversary of the declaration of the Biafran Republic, in memory of those killed during the war and those killed by Nigeria’s security forces in their renewed agitation. In 2016, more than 150 unarmed protesters were killed by Nigeria’s security forces while celebrating the anniversary of Biafra. Amnesty International strongly condemned Nigeria’s government for the massacre. Many more killings, arrests and incidents of torture by security agents of Biafra supporters celebrating the anniversary have taken place in different parts of Nigeria over the years.

Protesting IPOB members during the sit at home protest.

Last year, the federal government launched a military operation in the South-East, which was code-named “Operation Python Dance II”. The reason for this was to quell the growing agitation by members of Indigenous People of Biafra (IPOB) and other pro-Biafra groups. More than 10 peaceful protesters were killed during the operation. In the end, IPOB was proscribed as a terrorist organisation. Many Nigerians and activists say the group does not qualify to be tagged a terrorist organisation as it does not carry arms or attack fellow citizens.

Many Nigerians and activists say IPOB does not qualify to be tagged a terrorist organisation as it does not carry arms or attack fellow citizens.

Despite this proscription, IPOB still announced the protest, which was welcomed by people in the region.

“We owe our heroes of the class of 1967-1970 an incalculable debt of gratitude and shall honour them annually until the end of time. We shall never forget them,” a spokesperson for IPOB said in a statement.

“This year’s remembrance will be special because it will present a unique moment of shared pain and misery for all the families that lost their loved ones to war, hunger, disease and terrorism,” the group stated.

Uche Mefor, IPOB’s deputy leader, said the protest is to remember those who were killed during the war while making their way home.

“It is about remembering and honouring those who fought valiantly against the 1966-1970 genocide and those who could not make their way safely to the east, as they succumbed to the sheer numbers and bloodlust of their supposed northern compatriots, who sought their gruesome death for nothing but jealousy and speaking of a different tongue,” Mefor said.

“It is about saluting the supreme sacrifice of all Biafrans, who have formed the only bulwark against the renewed vigour of hatred of Biafrans that has reemerged since 30 May 2015. Many have died resisting and many have been traumatised. But for all of us who continue to survive, the only thing that makes us human, gives us honour and succour is to sit-at-home and remember.”

Jonah Onuoha, a professor of political science and the director of the Centre for American Studies at the University of Nigeria, told This is Africa that the sit-at-home order was meant to achieve three objectives: to create awareness for the continuous struggle for the sovereign state of Biafra; to commemorate the destruction of Igbos – the killings, marginalisation and maltreatment – and to raise a new voice for the future of Igbo people.

“It is meant to unite Igbos on one platform in Nigerian politics,” said Prof Onuoha. “The sit-at-home has become an annual ritual. Everybody looks towards it, whether it is announced or not. It is a positive for those who believe an independent Biafra will be good for the Igbo people. It sends a signal to the centre of power.”

However, Prof Onuoha highlights the economic implications of the annual anniversary. “It shows that Igbos are united, but economically it is destructive. Igbos lose billions of naira every year because markets are closed and business people stay at home. This happens even though those who push for people to stay home have already made their objectives well known,” he said.

Given the proscription of IPOB, many expected security forces to clamp down on the protesters but Olu Omotayo of the Civil Rights Realisation and Advancement Network (CRRAN) told This is Africa that the law permits the right to protest.

“Under the law, you have the right to stay home. There is nothing wrong with it. They (IPOB) have not contravened any law through their members staying at home. They did not inflict any injury or violence on anybody. It is their right. Somebody can decide, I want to stay at home today. They simply exercised their right through their members and the people who believe in their struggle,” Omotayo said, adding that “protest and pressure are part of pursuing an objective. In the long run, since they are not violent, if the whole thing gained acceptance in the South-East, they will achieve their goal because they will end up crippling the economy for that particular day. Anybody in Nigeria has the right to protest, but non-violently.”

Read: Nigerian separatists refuse to bow to pressure 50 years after the civil war

In South-East Nigeria, young men and women still hold the belief that Biafra will come about one day, despite their current struggles and oppression by the federal government.

Since the disappearance of the leader of IPOB, Nnamdi Kanu, last year, when the Nigerian army raided his home in Umuahia, Abia state, the group has continued to push the struggle for the realisation of the independent state of Biafra.

“Biafra is our destiny and we must live to actualise it,” said Paul Nnanna, a medical student at a university in the South-East. “The road to freedom is not always smooth but we shall get their someday,” he said.

David Peter is of the view that the sit-at-home served to ensure that the people who fought and died in the Biafran War will not be forgotten.

“In this part of the world, we do not maintain a culture of observing such things, but with the help of IPOB, minds have been opened. Now there is an understanding of the need for the sit-at-home to remember those who lost their lives,” he said.

Hillary Agbo, another supporter of the protest, stated that it was “very thoughtful” of the Igbo people to observe it and honour the fallen Biafran heroes. “We must always remember them. They saved us from elimination by Nigeria and her allies,” he declared.

Sexual harassment: A social ill that wreaks havoc in Nigeria