“Exhibit B”: Look black in anger 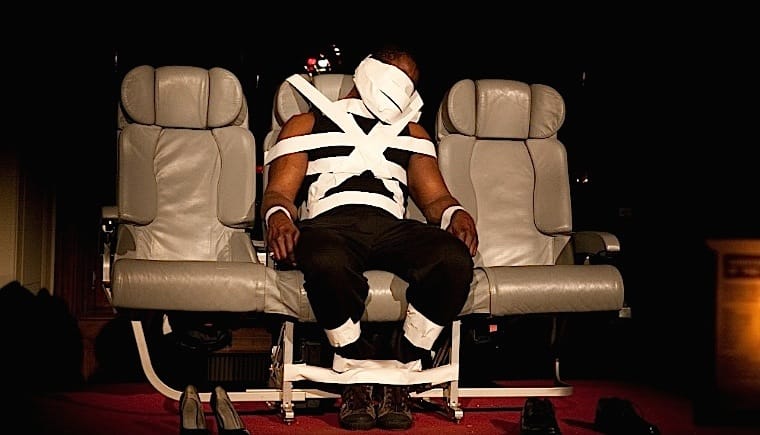 When Bailey first proposed his Exhibit series, I was suitably horrified. The obvious dangers and traps of creating a work that explores the objectification of black bodies by using actual people to critique “human zoos” (a phenomenon most Europeans had conveniently forgotten about) appeared to me to be a mental quagmire only fools would enter.

But Bailey is no fool. In a process that involved years of immersive research, talking to communities, painstakingly working through the contradictions and sensitivities thrown up by such a live exhibit, and processing the work together with the performers, Bailey and nine different casts have managed to create an incandescent work of art.

The work was first staged as Exhibit A, a “meditation on the dark history of European racism in relation to Africa”, focusing on German colonial South West Africa where the first genocide of the 20th century, a mass murder perpetrated on civilians, two-thirds of them women and children, based purely on their racial classification, was committed. Over half the Herero and Nama population perished.

It was this grisly history that Bailey put the spotlight on by staging the work in no less a place than the Hofburg Palace, Vienna, and then again in Berlin, at a time when after lengthy negotiations, the German government agreed to repatriate to Namibia 47 skulls from the cellars of the Charite University of Berlin and another 12 skulls from the University of Freiburg.

When Bailey staged the work in Amsterdam earlier this year, activists supported the work and used it as a rallying point for their objections to Zwarte Piet (Black Piet, the sidekick of Santa Claus, still played in black face by white Hollanders).

A Place in the Sun, from Brett Bailey’s “Exhibit B”. This installation was based on an account of a French colonial officer who kept black women chained to his bed, exchanging food for sexual services

The modern version of the human zoo indignity today are the adverts for foreign aid with starving, fly-encrusted black children; and the gratuitous insertion in theatre spectacles of various cause célèbre surrounding AIDS, famine and poverty in Africa.

Bailey turns all of this on its head. In Vienna, patrons were collected individually, at intervals, by the children of African refugees in their city. I saw how having to take the hand of a black asylum seeker’s child had a significant impact on the Viennese patrons.

But nothing could prepare them for the shock of the gaze returned. The performers have compelling stares and follow the audience as they survey the installations. The result is a disconcerting transformation of the spectacle into spectator; the viewer suddenly under scrutiny. It detonates the status quo of passive African victim presented sympathetically to the liberal European patron of the arts. What is held up is more than a mirror, but the way the other sees one.

An installation from “Exhibit B”. Visit Belgium’s Museum for Central Africa even today and you will be surprised to see the way the museum’s curators portray African people and Belgium’s brutal colonial past.

The rooms are filled with objects that document colonial brutality. A Nama choir sings in heartbreaking harmony, lachrymal songs about the genocide. Then the crux – Bailey brings his campaign into the present day.

The week before the opening of Exhibit A there were demonstrations in Vienna and a public outcry surrounding the deportation of 14 Nigerian soccer players. One was arrested on the pitch in the middle of a game.

Bailey’s response was to include an identity parade of asylum seekers. They stand in a row behind high-tension electric wire. On enlarged cards are their immigration identity forms, recalling the measurement tables of anthropologists. It was a very uncomfortable and disconcerting space. The last enclosure was left empty except for a pair of soccer trainers, and the red official stamp in German ‘DEPORTED’ across the immigration form.

A meditation on the dark history of European racism in relation to Africa. “Exhibit B” was one of the most thought-provoking works at 2014’s Edinburgh International Festival.

The final installation is a work of outrage. On a set of aeroplane seats, wrapped in packing tape, a man plays Marcus Omofuma, who slowly suffocated to death on a deportation flight to Bulgaria. The Austrian police had bound Omofuma with adhesive tape across the mouth and nose. He was only 25.

But then along comes some sloppy journalism – an article in The Guardian based on a rehearsal that referred to it as Edinburgh’s most controversial show, but was written before it opened; several factual errors; a misleading headline (‘EXHIBIT B, a human zoo’ – a label Bailey never uses), and some pure inventions of the journalist to manufacture a cast “mutiny” where there was none. The cast member “quoted” has subsequently described the article as “bullshit”.

Another performer remarks: “I think there is a fair amount of racism being directed at him [Bailey]. The fact that he is a white South African seems to be sufficient proof that there is something wrong with the show for people who haven’t seen it.”

The treatment of African asylum seekers today at the hands of officials in Europe recalls the work of anthropologists who set out to “demonstrate” the inferiority of Africans.

As UK poet Lemn Sissay puts it, in support of the work, the story of racism and slavery “must be told by all and remembered by all”.

Objections to the show spread like wildfire on social media and a petition was set up on change.org. In the internet age, complex issues are reduced to the click of a button to sign a petition, or a “Like” button for a derogatory comment on Facebook, while only having the vaguest notion about what is being presented. 17,000 signatories have joined the ideologically blinkered, press-to-send herd, hardly a single one of them having even seen the work.

Earlier this year in London, I chose not to go and see The Book of Mormon, having heard that it depicts Africans as AIDS-ridden, baby-raping cannibals. (Not a whimper about that show in the press, by the way.) But having not seen the show, I cannot venture an opinion on whether its effect is in fact racist, and I certainly would not write a column about it.

Yes, enter the columnists, who cut and paste, and are thankful to have a subject for the week that gives them the opportunity to once again spout ideological boilerplate playing to likeminded readers they have collected over the years.

Then come the social media bullies and the moral outrage. On Facebook, a cast member is called a “corrupted ignorant selfish woman” for being part of Exhibit B. There are worse comments not deserving repeating. The cast is dismissed by white liberals as mindless puppets, dupes, and Bailey’s stooges. Other black intellectuals, accuse them of doing it for fame and money.

These petitioners have completely ignored the voices of the casts in the nine cities that performed the work so far. They haven’t even seen the personal motivations cast members have posted at the exit to the performance, such as Namibian Thereza Kahorongo, who saw making the work as her personal “healing experience”.

In the face of the criticism, Bailey says: “I am feeling challenged. It really is making me look at the work again – and after reflection and consideration of the views of my detractors – my belief in the piece is reaffirmed.” The cast have been soul searching too, and eloquently rebuff the critics.

In Berlin, objections appeared to be more about the politics of that city, money, and Bailey’s encroachment on pet activist territories. A candle vigil was held by a dozen protestors, which had the effect of resembling a final installation of the piece. None of the protestors I spoke to had seen the performance. After every performance, free entry was given for people to discuss the work with the cast and director.

For many black viewers, it is simply too painful an experience to go through, as it is for many Jewish people going to a Holocaust centre. One critic of the show in Berlin did touch me. She said as a black woman she felt there was nowhere for her to look, no place in this exhibit for her gaze, and she felt excluded.

The show is clearly not for everyone. Yet every audience member I spoke to was deeply moved, even shattered by the experience. To claim it is a guilt purge for Europeans, as some do, is cynicism of the worst kind.

One FB user ignorantly calls it “a Saartjie Baartman type exhibit”. Nothing could be further from the truth. This kind of call for censorship, together with uninformed outcries and thoughtless bullying on social media, is turning debate into idiocy.

Full disclosure: Brent Meersman has been the theatre critic for the Mail & Guardian for the past 10 years and is a member of the International Association of Theatre critics editorial board. In March 2014, he accepted an unpaid, advisory position on the board of Third World Bunfight.

If you’re in London, see for yourself: “Exhibit B” is at The Barbican, 23 to 27 September.

Maybe you SHOULD fake your PhD