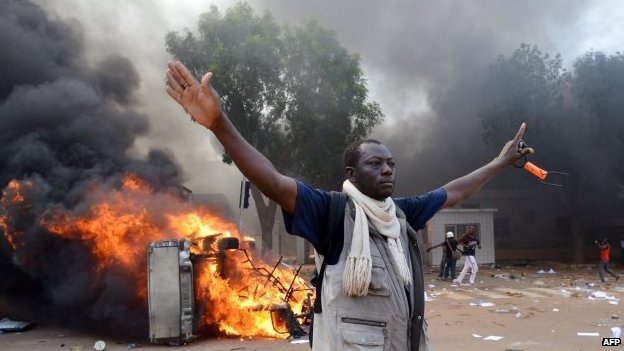 Ouagadougou’s anti-government protestors stormed into the National Assembly, to oppose constitutional amendments that would allow President Blaise Compaore to extend his 27-year rule in next year’s election.

On Thursday, one person was killed in a protest police struggled to contain with teargas. Citizens targeted The National Assembly and the national television station (RTB) which was pulled off air, while cars were set on fire.

Police used tear gas and live rounds to stop the protestors from advancing to the presidential palace, according to Reuters.

Burkina Faso’s president took power in a 1987 coup and has stayed in power despite a string of mutinies in 2011, and a peaceful protest earlier this year to compel Compaore to step down. “The president must deal with the consequences,” said Benewende Sankara, one of the opposition leaders who called for the march on parliament.

The government announced the vote to amend the constitution was called off, but it unclear whether that is a permanent decision.