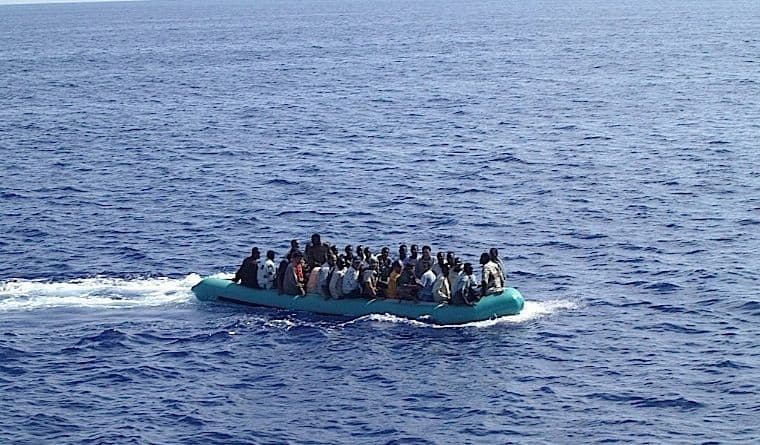 [Editor’s note: Since this article was written, another boat has been discovered off the coast of Sicily, with thirty dead bodies on board.]

Summer in the Mediterranean: flat water, clear skies. On sandy beaches along the sea’s northern shores, holidaymakers pitch umbrellas and order cocktails from open-air restaurants. But in North Africa the good weather signals boat season, and thousands of would-be emigrants prepare to leave. Europe, land of hope and opportunity, is a single journey away, and a host of illicit service providers—referred to elsewhere as human traffickers, although it’s largely a question of perspective—offer their clients direct passage across the water for a fee.

The boats, which range from repurposed fishing vessels to high-speed rubber ducks, are unregulated, overcrowded, and seldom in good repair, occasionally resulting in disasters like the October 2013 Lampedusa shipwreck, when more than 360 African migrants drowned. Yet despite these tragic incidents, thousands continue to risk the journey: according to Frontex, the European Union border control agency, more than 42,000 people attempted to cross the Mediterranean to Italy in the first five months of 2014 alone, representing a rate of approximately 280 people a day.

The United Nations Refugee Agency has warned that a “colossal humanitarian catastrophe” is currently unfolding, with insufficient capacity across southern Europe to cope with—or “process”—the influx, and few practical options to improve safety on board the boats. Meanwhile, far-right groups across the EU are becoming increasingly strident in their calls to clamp down on illegal immigration, acting less out of concern for the immigrants than out of fear that their arrival will threaten European interests.

Regardless of whether opposition to the crossings is framed in progressive or conservative terms, boats continue to depart almost daily from countries like Libya, Morocco and Egypt, ferrying passengers from across North and West Africa, as well as the Middle East. This year, unrest in Mali, Syria and Eritrea has driven a sharp increase in traffic; in 2011 violence associated with the Arab Spring pushed immigrant reception facilities in Italy and elsewhere to breaking point. Acute periods of turmoil aside, long-term mass migration trends from Africa to Europe have been in place for decades, reflecting discrepancies in the distribution of wealth and power that have existed since the colonial project began.

Lip service and hidden agendas
Despite the anti-immigration rhetoric repeated by so many of Europe’s leaders—some of whom, like Britain’s UK Independence Party and Greece’s Golden Dawn, have risen to prominence by exploiting populist xenophobic sentiment in the wake of the financial crisis—a significant portion of the European economy also depends on illegal immigration to function, with immigrants providing low-cost labour and playing an important role in the region’s informal and black-market trades. Writing in Third World Quarterly, Hein de Haas of the International Migration Institute has argued that “vested interests” like these fundamentally undermine attempts to tackle illegal immigration, eroding any genuine will to deal with the problem:

“Dominant policy discourses and media coverage systematically ignore—or obscure—that African migration to Europe …  is fuelled by a structural demand for cheap (irregular) migrant labour. However, the demand side of irregular migration is obscured behind a series of discursive strategies politicians and states use—for instance by portraying irregular migrants as victims of smugglers and traffickers—which seems to justify the exclusion and marginalisation of irregular migrants through restrictive immigration law and border control.”

What this means, essentially, is that Europe’s illegal immigrants are explicitly forbidden yet implicitly welcomed, wedging them into clandestine sectors of the economy where there are few safeguards to protect them from exploitation.

The Napoli connection
In southern Italy, organised crime cartels profit from the steady stream of new arrivals, employing them as drug pedlars, bodyguards and prostitutes but also outsourcing their labour to mainstream industry, illustrating some of the complex hidden ties that exist between illegal immigrants and the broader European economy.

I was in Napoli last month and interviewed Silvia*, an aid worker at a local human rights NGO that offers assistance to immigrants. Sitting at the base of a statue on Piazza Garibaldi, the city’s bustling central square, she explained how the Camorra, one of Italy’s largest and oldest Mafia groups, controlled access to the informal economy, which is one of the few places migrants find work.

“The Camorra runs the street markets, charging traders fees to set up stalls and supplying them with counterfeit goods. They run the drug and sex trades. They run labour firms. And because immigrants have no legal status in Italy they have very little power to complain if they’re treated badly. Thus puts them in an extremely vulnerable position.”

The fact that most immigrants ended up in the unregulated informal sector, she said, could largely be attributed to state policies that failed to recognise—or admit—that ample opportunities existed for low-cost, unlicensed workers on the black market.

“Emergencies like the Arab Spring and the Malian civil war result in Italian border controls being completely overwhelmed, and officials have no way of dealing with the problem. They allow thousands of people into the country, but then make them wait for work permits and other formal documentation. During this time migrants are forced to make other plans—they need to eat, after all—and end up getting trapped in the Camorra’s system. It would be better to give them permits on arrival, but our government would never do that.”

This denialist approach harmed immigrants but benefited many Italians, she said, who took advantage of the goods and services offered by the informal sector.

“Ordinary Neapolitans don’t buy brand-name clothes from stores; they buy cheap imitations in the markets. They buy drugs from Nigerian dealers and pay pimps for African women. They hire housekeepers off-the-books to save money. These things are part of everyday life here.”

An African trader selling bags on the beach in Marina Palmense in Italy. Photo: Dave Collier

But the demand-side drivers of illegal immigration run far deeper than mere personal convenience, with Mafia-run systems of employment like the caporalato, which supplies cheap labour for Italian farms, firmly embedded in mainstream business practice.

“It’s a modern form of slavery,” Silvia said, echoing recent comments by investigative journalist Roberto Saviano, who has written extensively about the Camorra. “The workers get paid terrible wages and live in abandoned buildings with no facilities. They work twelve-hour days. This allows farmers to sell their produce for cheaper, and places those who don’t participate at a disadvantage. Once again, it’s the immigrants that lose out.”

I’d been buying delicious cheap tomatoes from the markets nearly every day, and I commented on their low prices.

“Yes, it’s tomato season,” Silvia said, sighing. “They grow in this region. Nearly all the farmers here use the caporalato system.”

Like so many Italians, and like much of European society in general, I’d been enjoying the fruits of a system that pushes immigrants to the margins while reaping the benefits of their suffering.

* Not her real name

Advertisement
Related Topics:Immigration
Up Next

To withdraw or not to withdraw? Kenya’s dilemma in Somalia