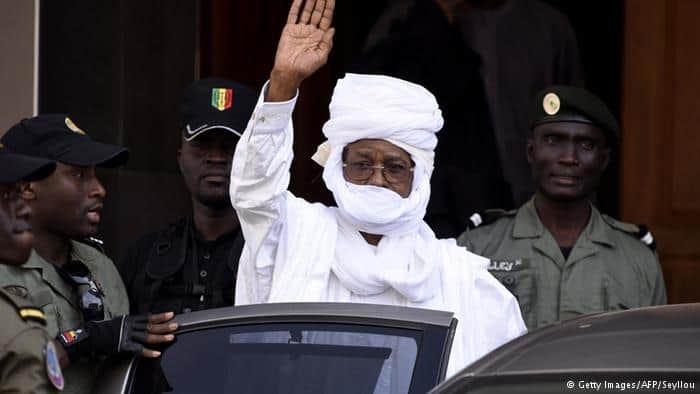 The trial of Habre is taking place before an Extraordinary African Chambers 25 years after he fled Chad and two years after he was arrested in Senegal in June 2013.

The 72-year-old Habre said he does not recognise the jurisdiction of the court. Dressed in white, he was already seated in front of the judge before the media was allowed to enter the special court on Monday when the case was called.

The first day of trial was marked by chaos as Habre was dragged out of court while he shouted that the trial was a “farce by rotten Senegalese politicians.”. As he did that, his supporters in the courtroom chanted support for him.

“This is not a trial, this is a masquerade! There is no trial. There are no lawyers. This is a false trial. Down with colonialism,” he screamed as he was dragged out by guards and the trial continued without him.

A statement which he issued was then read by tribunal head Gberdao Gustave Kam. In the statement Habre said his detention was illegal and that he would not respond to the special court.

Evidence reportedly obtained against Habre by Human Rights Watch show that his administration oversaw the torture and murder of up to 40,000 people when he ruled Chad from 1982 to 1990.

Despite being wanted in Belgium, the president of Senegal has insisted that Habre will not be extradited but will face trial in Senegal.

Related Topics:Criminal justice
Up Next