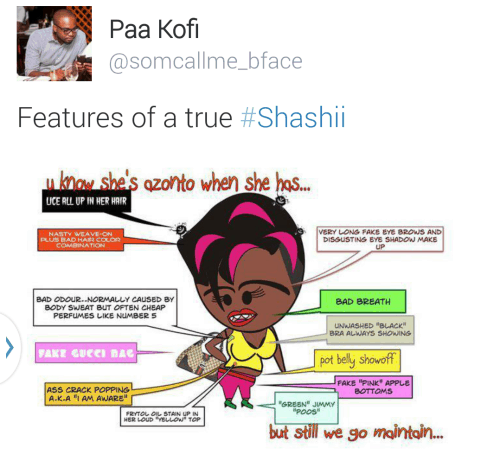 #Shashii was trending on Ghanaian twitter in the past few weeks. Was all of Ghana reflecting on the business of prostitution? Had there been some new law that had been passed on the business that will cause all of Ghana to buzz about shashii and the prostitution business? No, nothing new had happened. It was just another obsessive conversation about women’s sexuality, driven mostly by young men and male teenagers (and women themselves), all of whom expressed opinions that carried the weight of the patriarchal society Ghana currently is.

For non-Ghanaians reading this, ‘Shashii’ is Ghanaian derogatory slang for a prostitute. But the word been broadened to mean not just a woman who is actually in the business of selling sex, but to incorporate ALL women who do not fit a certain status quo of prescribed sexuality. What is the status quo according to Ghanaian twitter? A woman has got to be a lady. Deny your sexuality and pretend if you have to, to be pure and virginal. You don’t have to be a virgin, just act like you’re not interested in the opposite sex, or not attuned to your sexual needs and willing to explore them. And sure as hell, do NOT be bold about it! But in the privacy of closed doors, you’ve got to know how to go about your sexual business. Cuz though all men want ‘marriage material’ they want a ‘shashii’ in bed. It gives ultimate sexual pleasure for guys, you see, to have a ‘sexual virgin’ (whatever that is). In other words, be a lady in the streets, but a freak in sheets.

‘Shashii’ could also very well be an appropriation of the American slang word of the same name (though different meaning) ‘Shashee’. The American slang of this word means ‘female genitalia’ and seems to lack the insulting thrust of its Ghanaian appropriation. The urban dictionary defines ‘Shashee’  as ‘another word for the female reproductive organs, much better sounding than ‘pussy’ or ‘vagina’.  Yet, the urban dictionary lists ‘hoe’, ‘ashawo’ (Ghanaian slang word meaning ‘slut’) as related words. This is the only way to explain this: In a patriarchal world where feminine sexuality is painted as a dirty, sinful thing, it is no wonder that a slang word for vagina would deteriorate into an offensive word for women and women’s sexuality.

If all the bouncers and bar tenders give her fans as the two of you enter a club, she be #shashii x #Pooley

A form of Ghanaian definition to shashii can be found in the words of a Ghanaian hit song of the same title, “Shashee woowoo” (a variant spelling of the same word). The artiste, Stay J, defined Shashee as  “this girl, she dey love boys too much, this guy he dey love girls too much…she be what? Shashi wowo”.  According to this popular song, a shashii was a girl or guy who had sexual or romantic relationships with many members of the opposite sex. However, a woman’s sexual relations are way more scandalous to the public than a man with multiple sexual partners. After all, in the polygamous society Ghana is (though they will swear on the love child that they are monogamous), the latter was normal. Almost every other person has a step brother or sister.

This is not the first time #Shashii has got twitter abuzz. The trend has resurfaced quite often on Ghanaian twitter in the past four years as you will see below. According to Ghanaian twitter, the following are the rules women must follow, or be kicked into the ‘Shashii’ squad (mind you, some conflict):

Be a Virgin Mary. We all love Virgin Mary, but shed some of the innocence when we step in the bedroom. It’s about the appearance you see. Men are supposed to be wild and explore because they are men. (But if all girls really remain virgins and deny their sexuality till marriage, how in hell will guys become the ‘men they are supposed to be’?)

1. A woman is not marriage material if she is open about her sexuality and willing to explore it with zeal.

2. A woman with a healthy sexual appetite is not dateable because she must be a hoe to have such a voracious appetite!

4. A woman cannot have multiple sexual partners. It’s not a problem if your man does.

5. A woman who has sex before marriage is a shashii

6. A woman cannot be excellent at sex. If she is, she must definitely be a shashii

7. A woman cannot want more sex from her partner after he has been satisfied. If she does, she must be a shashii

8. A woman CANNOT be the initiator of any relationship with a man. Let the man ‘be a man’

The rules are endless. The policing is brutal. If any woman ACTUALLY followed these rules, she will end up a shadow of herself. Or a distended balloon, lifeless, covered in dust and waving forlornly in the wind.

Why the obsession with women’s bodies and what one woman or the other chooses to do with her body? Why should a group of men dictate what a woman should do with her own body, and say ‘this is good for you, and this is bad for you’ and all the while, not adhering to their own rules? This is not to say women themselves do not spout this misogynistic bullshit; because women as well as men are victims and puppets of the deeply misogynistic society. The double standard in all this slut-shaming is what is most hypocritical.

Somehow, the main thrust of Ghanaian tweeters’ slut shaming was aimed at women, hardly a discussion on the occasion of men and their numerous sexual partners, which is actually a situation that has been normalised.

From the story of Eve and the forbidden fruit to the fallacies of a patriarchal world history, women’s sexuality has been painted as a dirty and sinful thing. In some experiences a fearful thing. A beautiful woman, aware of her sexuality is a temptress, the devil’s weapon (as I have heard a pastor reiterate). A woman who dares to be open or aware about her sexuality can be judged because she causes men to sin. It has to be the woman who is at fault.

A Kenyan woman protests as part of the #MyDressMyChoice campaign. Photo: Ben Curtis/AP

With this much repressive and judgmental thoughts surrounding women’s sexuality, it’s no wonder that a healthy discussion around sexuality is stymied. Exploring teenagers cannot have healthy discussions about the changes to their body; neither can couples have healthy discussions as to the pleasures of their sexual lives. Many women are gagged by the societal repression and judgment that surrounds their sexuality so much that some women are having terrible, unfulfilling, spiritually and emotionally damaging sex and can talk to no one about it. It is also because of these double standards that many Ghanaian women stress to the point of depression to fit a status quo that the rule makers themselves do not follow.

Kill these damn double standards. Who is anyone to set a quota on the number of men a woman can be sexual with? Who is anyone to decide when a woman should keep her natural sexuality in check or hide it? Women are sexual beings. It is nature. It is natural. To try and twist nature into what it is not is to try and kill that natural being. To try and stem the powerful tide of a woman’s sexuality is to try and break her, and erase a lot of what she is.

The creation of this hashtag is even more alarming because a majority of these heinous thought expressions are by the largest cross section of Ghana’s youth. These are not thoughts expresses by men of an older, generation but men of this one, who have inherited the patriarchal flaws of the last generation.

Related Topics:GhanaSocial media
Up Next