KiSwahili as an agent of liberation, integration 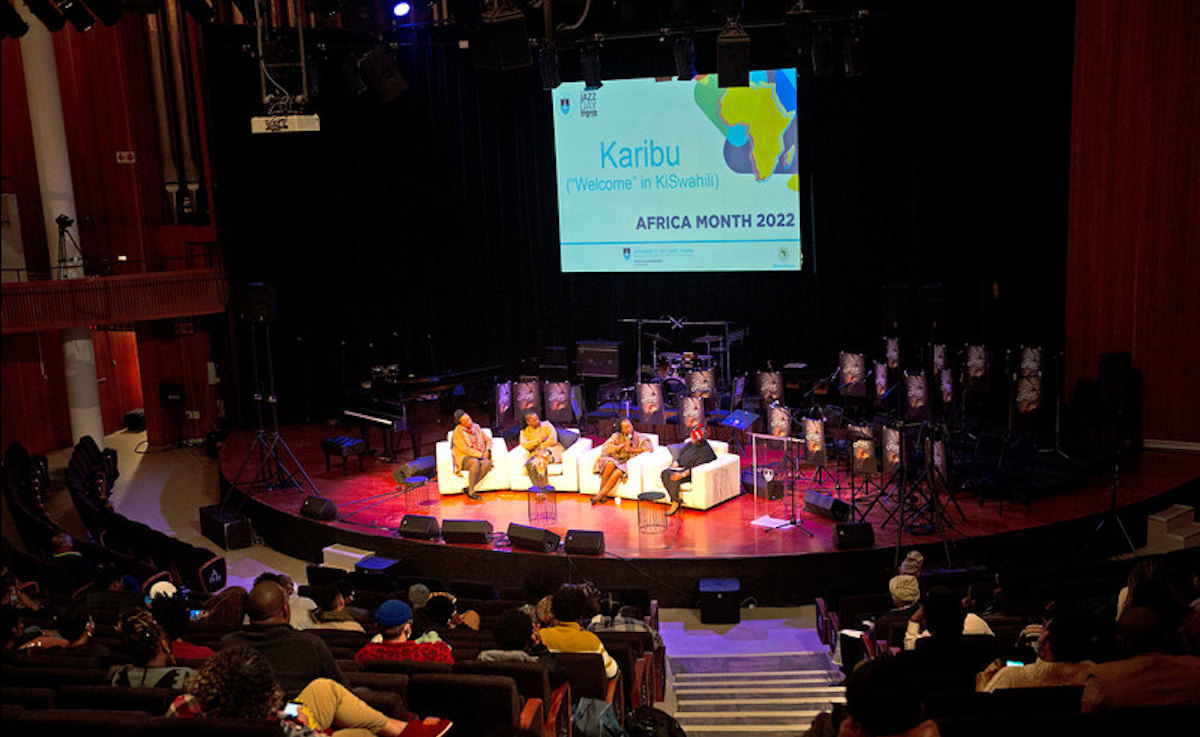 UNESCO’s 2021 decision to declare 7 July World KiSwahili Day made it the first African language to gain international status. The African Union too recently adopted Swahili as one of its official working languages. But while Swahili may be Africa’s lingua franca, it will take more than a common language for the continent to speak with one, unified voice.

The discussion was the first of a two-part programme on language and music as agents of African liberation and continental integration. This was hosted in collaboration with the International Jazz Day South Africa, one of several Africa Month events hosted by UCT and the Faculty of Humanities.

Among Africa’s 2 000 active languages, KiSwahili is the most spoken and studied. It ranks among the world’s 10 most widely adopted languages. Since 1963 KiSwahili has also been the language of the diaspora.

KiSwahili is not an ethnic language, Mutembei noted, but a collection of dialects from the east coast and inland as far as the Congo.

“It grew out of necessity from trade, slavery, religious, administrative, political education in post-independence Africa. It has evolved with a conscious mind for use in cultural liberation, political gain and educative purposes and to unify people and national consciousness. [KiSwahili] was used to solidify people’s togetherness as a weapon against imperialism. It made people see their commonality rather than their differences.”

For example, after the founding of the Tanganyika African National Union (TANU) in 1954, KiSwahili didn’t compete with or preclude other Tanzanian languages, but united Tanzanians in their fight for independence, said Mutembei.

It also served to reconstruct the African persona, growing in its role as a vehicle for mental liberation in post-colonial Africa.

But by adopting KiSwahili as Africa’s lingua franca, it is not certain that KiSwahili could unite Africa under one voice, Mutembei said. Rather its role was as a powerful agent of integration.

“This is a process where people interact in a number of activities, a process of inclusion rather than exclusion; it brings a sense of togetherness, where cultures converge without hierarchy and work to create a symbiotic new culture.”

For example, the continuation of the Kwanzaa festival in the United States, a week-long celebration of African-American culture first celebrated in 1966, showed KiSwahili’s invaluable role in integrating Africans – even when abroad.

Africa Month was first adopted to celebrate the Organisation of African Unity (OAU) in 1963 as a solution to the division between the Casablanca Group and Monrovia Group and their approaches to uniting Africa. The OAU’s basic aims were to restate pan-African ideals: decolonise the continent, promote African unity and solidarity, and protect the territorial integrity of the states.

“It was essentially meant to seek the rapid decolonisation of Africa. But after 1994 when South Africa became independent from apartheid, the OAU laws’ relevance became obsolete and anachronistic.”

Pan Africanism is the mother. Integration is the baby. And language is one of the foods required to feed and nourish the baby.

The need was for an organisation better suited to dealing with Africa’s post-colonial and post-Cold War challenges. The new African Union (AU) was designed to do that – and to promote the ideals of pan-Africanism and regional integration as the viable development path for Africa. But the AU has not managed to foster significant integration or unity among its member states, said Akokpari.

The importance of language as a unifier can’t be overemphasised, he said.

“Pan Africanism is the mother. Integration is the baby. And language is one of the foods required to feed and nourish the baby.”

He added, “Evidence from Africa suggests that countries with common languages tend to cohere. In fact, linguistic homogeneity tends to provide a stronger unifying force than religion or war.”

Swahili had fostered this coherence in Tanzania, for example. It is one of the few countries in Africa that has remained “conflict free, united and tolerant”.

KiSwahili has also helped promote linguistic communication in this east African region and acted as a unifying force in an otherwise socially fractured continent.

“Perhaps other regions could consider the adoption of common languages.”

Each region in Africa is unique in some ways, and proposals recommending the adoption of a regional language should only be made with caution.

But there are limitations to the argument too.

“Somalia is a homogeneous country by African standards. Its populations speak the same language and share the same religion. Yet since the past three decades, it has been grappling with violence and has lacked civil central government. Similarly, Lesotho is homogeneous, with one dominant language, and it is predominantly Christian. And yet Lesotho has witnessed one of the most violent post-election conflicts in Africa. Even heterogenous states like Zambia [and] Ghana have been able to avoid conflicts.”

Adopting a common language is not sufficient for regional stability, peace or development, Akokpari said. Additional conditions are needed.

“Each region in Africa is unique in some ways, and proposals recommending the adoption of a regional language should only be made with caution.”

Associate Professor Motinyane discussed the role of music in “carrying the language” of meaning, unity, political defiance and celebration. Citing “Shosholoza”, which multitudes of soccer and rugby fans have sung post-1994, she said, “People never thought about the language or what the words meant, but they sang, nonetheless. And yet the same group of people will struggle to pronounce an African name.”

Motinyane said she had learnt mathematical equations by committing them to song.

Our musicians have also long recognised the power of language in liberation movements as well as in uniting the continent.

“So, although our leaders and elders had no scientific evidence to support the belief that music and language have something that goes to the heart, we all can agree that there is a connection between language and song.”

She added, “Speech and musical sounds are thought to differ in their acoustic structure and therefore activate different receptive preferences in the brain. So, although it’s the same words, it’s the same language when it’s sung; it’s received differently in the brain.”

As such, music composers used their compositions as political tools to communicate societal issues to indigenous people after the colonial era. The political statement remained protected, bound up in music and song.

“Our musicians have also long recognised the power of language in liberation movements as well as in uniting the continent.”

Language also divides, as the recent Rhodes Must Fall (RMF) student protests showed. These were a reminder of the coloniality of university spaces, said Dr Guzula.

“In terms of my own work in language and literacy studies, it reminds me how language forms part of the colonial matrix of power, which we tend to ignore, because there’s an intersectionality of class, race and gender [within the campus community]. With RMF, the students reminded us that that there’s much that needs to be done in each of our disciplines. It has been an unrecognised area in our education system.”

And where are oral literacies in the definition of literacy?

Literacy had also become bound up in levels of English proficiency, a narrow measure.

“And where are oral literacies in the definition of literacy? Where do multimodal approaches to literacy fit in, which also include music as a form of communication? These are ignored in the teaching of literacy, because a Eurocentric notion of literacy says that you should have an ability to read and write. And yet, we know that people have always contributed to literacy in oral forms – either in storytelling, poetry performances, music or different art forms.”

“In that way, we are shifting the orientation of students from a monolingual orientation to a multilingual orientation but also preparing them for the diverse learners in schools so that they become qualified teachers at schools. There, they will be able to implement multilingual strategies, rather than rely on the deficit view that comes with seeing English as the only important language.”

A Kenyan school founded on Ubuntu and Afrocentrism