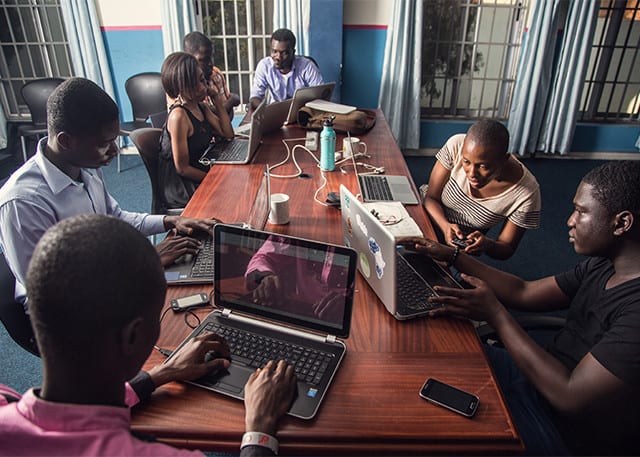 Google’s innovation lab -Alphabet’s X- has developed technology known as Project Loon. Project Loon is a network of balloons traveling on the edge of space, designed to extend Internet connectivity to people in rural and remote areas worldwide.

According to the projects website, “High speed internet is transmitted up to the nearest balloon from a telecommunications partner on the ground, relayed across the balloon network, and then back down to users on the ground. We have demonstrated data transmission between balloons over 100 km apart in the stratosphere and back down to people on the ground with connection speeds of up to 10 Mbps, directly to their LTE phones.”

Project Loon balloons are made from sheets of polyethylene and manufactured to survive the conditions in the stratosphere. Each tennis court sized balloon is built to last more than 100 days in the stratosphere before returning to the ground in a controlled descent. Most importantly the balloons are self-sustaining as they are solar-powered and have a battery which allows them to operate at night.

So far it has been used by U.S. telecom operators to provide connectivity to more than 250,000 people in Puerto Rico after last years hurricane.

Since 2017 Project Loon has hoped to work with African operators to bring its Internet balloon technology to the continent.

Alastair Westgarth, head of Project Loon at X, during a keynote address at AfricaCom 2017 in Cape Town said, “We have been testing the wind currents and the winds in Africa since the beginning of this year and we really look forward to hopefully working with some of the operators here to figure out how to extend their networks to provide connectivity to their unconnected folk.”

He said one of the balloons can provide coverage of up to 5 000 square kilometers, which is twice the size of Cape Town and the surrounding areas.

In the past week Joe Mucheru, Kenya’s information, communication and technology minister, told Reuters that project Loon representatives were holding talks with local telecom operators on the deployment of the technology in the country.

“The Loon team are still working out contracts and hopefully once that is done, we can be able to see almost every part of the country covered,” he said.

“Loon is another technology that is being introduced that the licensed operators hopefully can be able to use,” Mucheru said, adding it would help the government meet its goal of reaching everyone. “Connectivity is critical. If you are not online, you are left out.”