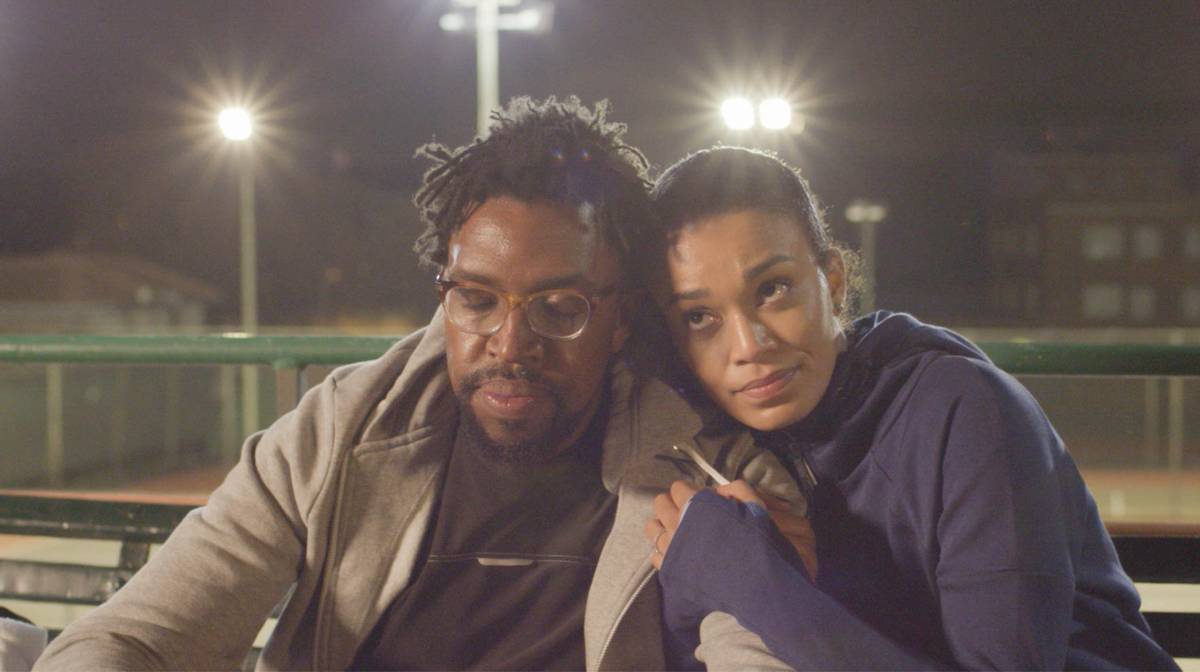 “The only black guy in here is the waiter,” writer Max Matshane points out in a Cape Town cafe. Although the camera immediately pans into white faces to confirm this, there is an ironic dimension to Catching Feelings lead character Max (Kagiso Lediga)’s observation. Throughout the movie, he looks plagued by a sense of distance from himself. Not home in gentrified South Africa, years into writer’s block, scandalised by the endless radius of low culture, and not quite converted to sober sex for all his wife Samkelo (Pearl Thusi)’s die-for curves, Max is a beast of burnout. His race remark may well be about him not feeling black enough, given the self-aware distance one notices between his woke ethic and his middle-class performativity. Even with Max and other black writer-types placing orders in the white cafe, the only black guy there, may well be the waiter.

Catching Feelings is a 2018 romantic comedy, written and directed by Kagiso Lediga. The Netflix thinkpic brings together sex, race and literature through the insecurities of its cruelly self-probing lead character Max Matshane. Max, who has not written in a long time, finds little inspiration from both his cultural circle and the gentrified streets outside. His weed-laced sex life also takes a knock when a cocaine experiment leaves him “flat-tyred.” As if impotence is not worry enough, Max is raked by the sorrows of cuckoldry when he leaves a hedonistic white writer, Heinner (Andrew Buckland), under his roof, already giving off touch-happy tendencies around Max’s journalist wife Samkeliso before Max leaves Joburg for a guest lecture in Cape Town.

The movie opens with a dirty story, told by Max to his creative writing students, back at his university, about a white soldier who grows horns during a far-away campaign. “Humiliated and determined to know the truth, he embarks on the long and sleepless journey back home,” crying to the gods of long-distance relationships, kills the offending Moor on arrival and tells himself never to trust dark-skinned fellas again. This false opening is bravado as it is, in fact, Max himself who appears on the Catching Feelings poster with that Shakespearean prosthetic – cuckold horns – lives out the movie in terror of being cuckolded by a white guy, and finally makes that famous journey back home. From here, it’s one step to the movie’s Freudian subway. Impotence and cuckoldry themes, one soon suspects, agree with everything else in Mr Matshane’s black-writer psyche.

The black writer is always already played, whether he sells his soul to the system, ignores its evils around him or commits himself to faithfully opposing it. His voice equal-parts sensitive and sardonic, Max cannot quite decide whether he is committed or cynical. He is just more exacting in his demands on others, particularly Heinner, whom he sees as the condescending white liberal who was “fighting apartheid from a privileged station” only to desert South Africa when black people took over. In Heinner’s own words, the elderly white South African writer, now living in Australia, is about getting himself some “white time” away from “the violence, the high walls, the uncertainty” he has left behind.

“But I look around me now at even bigger idealists than me that stayed, and they have abandoned everything. They are busy raiding the public purse,” Heinner says. Not that his departures is connected to any sort of ethical or patriotic motive. What matters is to chase the good life without the claims of demography weighing on him.

In refusing any duty to South Africa upon his post-apartheid departure, and in refusing to contain himself to expectations during his homecoming escapades, talks and interviews, Heinner represents the freedom from qualification white creatives enjoy. His libertine white time is, unloosed from any social rules, dancing lessons from God. He contrasts Max, whose anger, sexual anxiety and paralysing self-awareness is summed up in the words of a white journalist who tells him to, “Relax a little,” as she goes out “to have fun” with Heinner.

Max is restless as he feels the weight of his horns. Identity is a a form of prosthetic castration like cuckold horns. My identity is what is added to my humanity. Woman and black man have to be qualified to the extent that they are a created excess. They are defined in terms of how they differ with the default human, the white man, whom nobody really thinks of as an identity category. Othered, exoticised and oversexed, they no longer exist to themselves but within the coordinates of their created excess. This is the fate of the African writer who must scream his identity in order to exist as an African writer.

Frantz Fanon’s Black Skin, White Masks deconstructs the oversexed black man down to a colonial projection. This legend of the forests, promoted by the scientific establishment and popular art, is somehow perverse and innocent at the same time, burning with animal passions but lacking the refined sensibility to process them, so that he is really interesting but not so much interesting to himself. He does not have the language for making sense of his created excess, and he is politically expendable to his white creators as such.

Frantz Fanon is one of the most articulate thinkers on anti-colonial liberation movements, colonial and post-colonial studies.

The white man is lonely in a world without equals. This is a world in which his scientific establishment creates other races and sexes as extensions of his ego. Geoff Murphy’s 1984 science fiction movie, Quiet Earth, can be watched as a psychology of races or cultures. In the movie, we meet engineer, Zac, waking up to find that he is the last on earth. Wolf Alice’s words, “When your friends speak, you hardly hear a word/ You were the first one here, and the last man on earth,” applies to his relationship with two other survivors who join him, a brawny Maori man and a beautiful white woman. He imagines that they don’t exist outside being voices in his head. By his formula, one is either beautiful or smart; he can only compliment the woman for her beauty. For his part, the Maori man is more remarkable for his native hardiness. “It’s complicated enough for people like me without trying to explain to people like you,” Zac dismisses the Maori’s curiosity about the cracks of a white civilisation that is beyond him.

In Full Metal Jacket, the oversexed black soldier gets white soldiers worked up for the little yellow sister with his “Alabama blacksnake.” But his colleague will restore the batting order with the words, “All fucking niggers must fucking hang.” Black castration is a staging fantasy by which grounded subjects organise their own relations. Black artists, from Chimamanda Ngozi Adichie to Kendrick Lamar, have revenged in kind, spitefully canonising the figures of the impotent white man and the primal black man. But what happens when this image is turned around so that the white man becomes the primal shock in impotent black civilisation?

The difference between the ages of Max and Heinner, described here by the elderly white writer, “I look at you and I see myself, younger, less successful, not quite as sexy,” brings a Freudian dimension to their relationship, with Heinner representing the father figure of the primordial horde who takes all the women to himself. Max looks on repeatedly as Heinner carries on his libertine exploits, and finally spends cuddly late hours with Max’s wife. He is the primordial son who has been condemned to privation. His Cape Town trip becomes the parricidal withdrawal from he will come back to confront Heinner.

The African writer disappears into his performance of African identity, the way Sartre’s waiter disappears into his waiter performance, a little too precise, a little too rapid, a little too quick, a little too eager, a little too solicitous, something of an automaton. The anger of the African writer, his faithful opposition to the white narrative, his unshaven, artsy look, is merely the rebellion expected of him. In Lacanian castration, symbols of authenticity do not only validate the speaking authority, but also show the difference between the individual and his office. “There is a truth in the wordplay between ‘hysteria’ and ‘historia’: the subject’s symbolic identity is always historically determined, dependent upon a specific ideological context,” Slavoj Žižek explains. In his ceremony of historicity, the black writer disappears into choices already made for him. Max envies Heinner’s white macho hedonism from this sheltered category.

Max’s sexual anxiety can be thought of in this way. His immersion in identity is what castrates him as such, so that we can now reconsider Dambudzo Marechera’s hysteric cry, “I am not an African writer.” Vaguely suspicious of his well-adjusted performative African writer persona, Max sets himself up for self-sabotage. He has lost all his privileges by the time he is ready to write his novel at the end of the movie.

Related Topics:ArtsFilmSouth Africa
Up Next

Women behind the decks: The rise of South Africa’s female Amapiano DJs

Another World Cup title for SA on home soil?