Women behind the decks: The rise of South Africa’s female Amapiano DJs
Advertisement 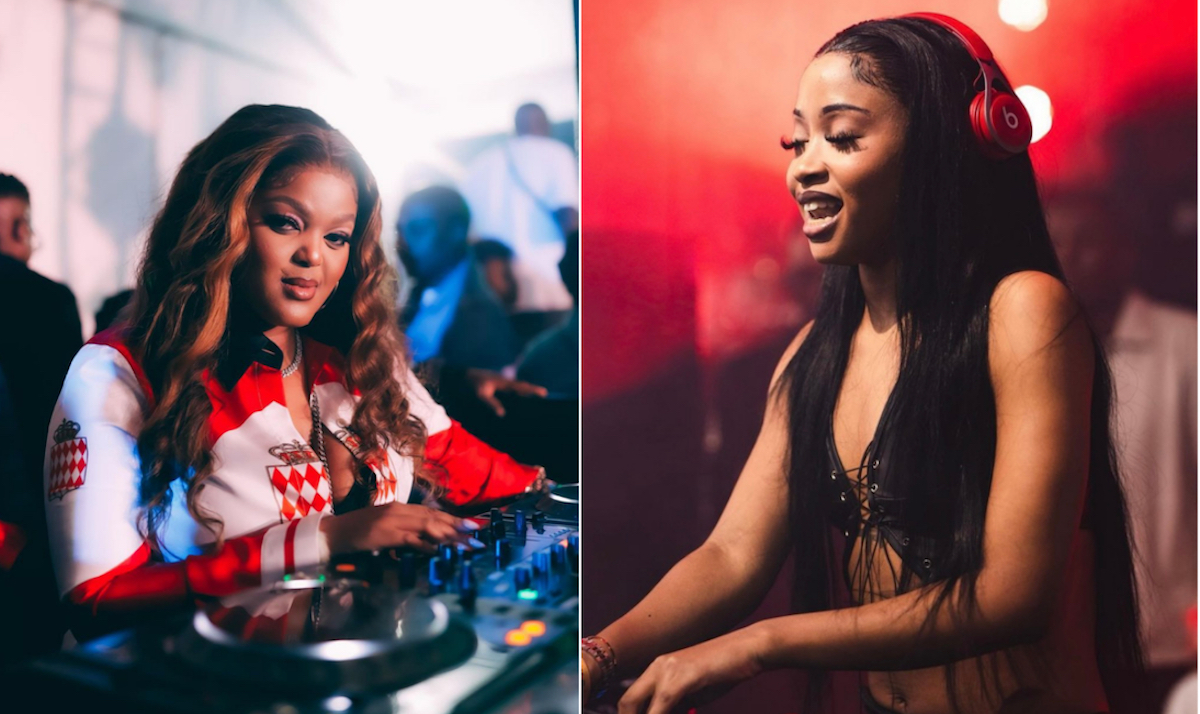 “There is an influx [of Amapiano DJs] and that’s the beauty of amapiano, it’s so inclusive, anyone can do it, there’s no gatekeepers in Amapiano. I really feel like it’s such a blanket statement to say that people are just pretty and don’t have the talent. People like to judge before they give you the platform and that’s not fair. At the end of the day, the talent will speak for itself and the consumers will always know … the more women we have the better … let’s take up space.” — DJ DBN Gogo

South Africa’s Amapiano is quickly becoming one of the most popular and widely recognisable music genres. Meaning “the pianos” in Zulu, its melodic sounds draw parallels to Kwaito and other staples of the South Africa House music scene, but with the added twist of Jazz elements and deep percussion and synth basslines. Amapiano has seen a massive swell in popularity beyond South Africa since its birth in 2012, primarily propelled by DJs and a massive trending presence on social media. The genre has become one of the fastest growing music genres in Africa and beyond.

Although initially dominated by male artists and DJs, the Amapiano scene has recently enjoyed an emergence of female DJs who are stamping their own unique creative talents on this cultural movement.

Amapiano is hugely empowering to DJs who in most cases get to grow bigger through hosting festivals and gigs. Lately, the genre has witnessed a significant rise in the number of females behind the decks. Among these emerging trendsetters are TxC – Tarryn and Clair, an increasingly popular female DJ duo. The sisters are now among the leading names on the Amapiano scene, drawing crowds and selling out venues across the continent and beyond.

TxC’s dynamic shows fuse their DJing skills with visual representations of the music through distinctive dance moves, popularised alongside the genre. While their growing fan base has propelled them to new levels evidenced by continuous international shows in Dubai and throughout Europe, their shows still frequent venues across Africa from Uganda to Mozambique, Nigeria to Tanzania, and of course their native South Africa.

Owami Mafokate is also one South African female DJ who has managed to carve a name for herself as a DJ in the entertainment industry. Owami was crowned the best female DJ, at the inaugural SA Amapiano Awards in 2021, which is something she said led her a step closer to becoming an international star.

“Funny enough I didn’t care if I got it or not, the fact that I got nominated just meant that I’m deserving enough to be the best female in Amapiano … even when I went to the SA Amapiano Awards, I just wanted to have fun,” she said in an interview.

Another rising star within Amapiano is Mandisa Radebe, popularly known as DJ DBN Gogo and is the daughter of former South African minister in the presidency Jeff Radebe. DBN Gogo is making waves across Mzansi and was also a nominee of best female DJ Act in 2021. Some of South Africa’s popular female Amapiano DJs include DJ Uncle Waffles, DJ Fae Fae and DJ Thuli P amongst others.

Female DJs have been catching a lot of smoke on social media, but there have been some who have been able to break boundaries. In 2021, female DJs took no prisoners as they made sure Mzansi and the world knew their names. South Africa held its first ever Annual South African Amapiano Music Awards in 2021. The pioneer Amapiano Awards featured a category for Best Amapiano Female DJ Act where six of female DJs were picked. Amongst these was DBN Gogo, Owami Mafokate, DJ Lamiez Holworthy, DJ Zandimaz, and DJ Duo TXC.  Owami went on to win the crown as the best female DJ Act in Amapiano.

To solidify the recognition of female DJs in Amapiano, in March 2021, following the launch of the EQUAL program by Spotify, DJ DBN Gogo became the centre of talk after she appeared on a billboard in Times Square in New York, United States.The Equal Music Program is part of the Equal Hub campaign launched on International Women’s Day this year and is aimed at ensuring that women in the music industry get treated fairly.

Spotify launched the global music program as a part of its commitment to advancing gender equity in music. The initiative aims to celebrate women pushing the envelope and inspiring the next generation of artists, producers, and executives. Each month, Spotify names an EQUAL Ambassador to honour game changers across the industry – as well as curates over 35 EQUAL local, genre-specific and themed playlists, highlighting women artists, globally.

With her involvement with Spotify’s Equal Music Program alongside American rapper Saweetie and Nigerian star Tiwa Savage, DBN Gogo said she was honoured to have her name and face on an international platform.

“That is still really crazy to me that I was chosen to be on a billboard up in Time Square, New York. The Equal campaign is really just about promoting women … just giving women that platform, that extra push to say that we’re recognised and appreciated,” she said in 2021.

With there having been talk about the number of female DJs flooding the Amapiano space, DBN Gogo says that being a part of the Equal Music Campaign was an emphasis on the importance of supporting black women having an equal spotlight and say in the music industry.

The role played by women in the music industry is invaluable. They are the face of the music, as dancers, vocalists and now seems just as right that they take the centre stage in the DJ roles.

Gradually gaining ground in African music with its wide admiration and acceptance from music lovers, Amapiano is South Africa’s latest explosive take on house music. Amapiano is a form of expression and getaway for the youth of South Africa. Though simply meaning ‘the pianos’ in the Zulu language, the novel genre is much more complex in composition than the name implies. With the unique instrumentation, it electrifies even a dormant crowd and puts you on your feet.

Increasingly, other African countries have been introducing flair to their sounds as they blend with mostly Afrobeat and Afro Pop. But, what is undisputed is that Amapiano is a sound of a young South Africa. Birthed and bred in the South African townships of Soweto, and produced from laptops and desktops using computer software like Fruity Loops (FL Studio), in council house bedrooms, the genre is a clear testimony of how young South Africans have managed to produce so much with so little.

Undoubtedly one of the biggest names in Amapiano, Major League DJs are definitely propelling the community-driven growth of Amapiano, developing new talents and taking the sound to the stratosphere.

If you type the word ‘Amapiano’ directly into YouTube, Major League DJs are a guaranteed top result. Having founded the Balcony Mix format that is pretty much synonymous with the South African house genre at this point, the identical twin DJ/Producer duo born Banele and Bandile Mbere are notorious vibes providers and seamless blenders for a diasporic generation hungry for electronic, yet ancestral, transcendence.

Amapiano, has undeniably united Africans, in the renowned dance continent of Africa.

“The spirit of amapiano right now to me is African dance music that brings the world together,” Bandile, one of the Major League DJ Duo states proudly. Banele, the other twin brother agrees before adding: “It breeds African soul. I think that’s why it’s even brought Africa closer together, or brought South Africa closer to [the rest of] Africa.”

And they’re right. The pan-African energy of the movement has found artists from across West Africa, East Africa and other parts of Southern Africa immersing themselves in the sound and even collaborating with South African artists on tracks — the branches of Amapiano are continuing to sprout, albeit to some mixed reception from the genre’s purists.

Those wanting to jump on the wave are more than welcome to if they do it the right way: “They must go to where the sound is being purified, learn and inherit from that, bring people in who started with it so it helps to actually grow the sound,” says Major League DJs.

It is more than a music genre, it is a culture, a lifestyle. It is an identity. It is freedom. A blend of many genres, along with Kwaito and local dance music that dominated the 90s, Amapiano is popularly known by the log drum, which is a raw baseline with a heavy kick of drum effect.

#amapiano, which is a collection of ‘challenges’ that are posted on social media platforms like Facebook and Tik Tok have generated more than two billion views online.

In 2021 alone, Amapiano grew by 116% on the Global Spotify playlist, following the success of the 2021 United Kingdom Amafest, an Amapiano music festival held in the UK.

“I think Amapiano also came at the right time where the world was actually looking at Africa and different elements,”DJ Duo Major League said.

More importantly, Amapiano symbolises black success. It is a whole new musical wave that is taking over the world. But, for youth South Africans, Amapiano is a national treasure, and the most important thing is that it belongs to the streets.

So far it’s infiltrated the music of folks like Rema, Burna Boy, Wizkid and intoxicated the likes of Drake, Diddy, heck even Fat Joe. It seems like what is left for Amapiano is to become one of the biggest genres in the world-there is no stopping it.

I feel very much that Black women are at the heart of what drives culture around the world. No trap, If it’s not bumpin’ in the strip club, it ain’ bumpin’. Amapiano, if the pretty girls are not dancing to it there in front of the Dj, it’s not bumpin.