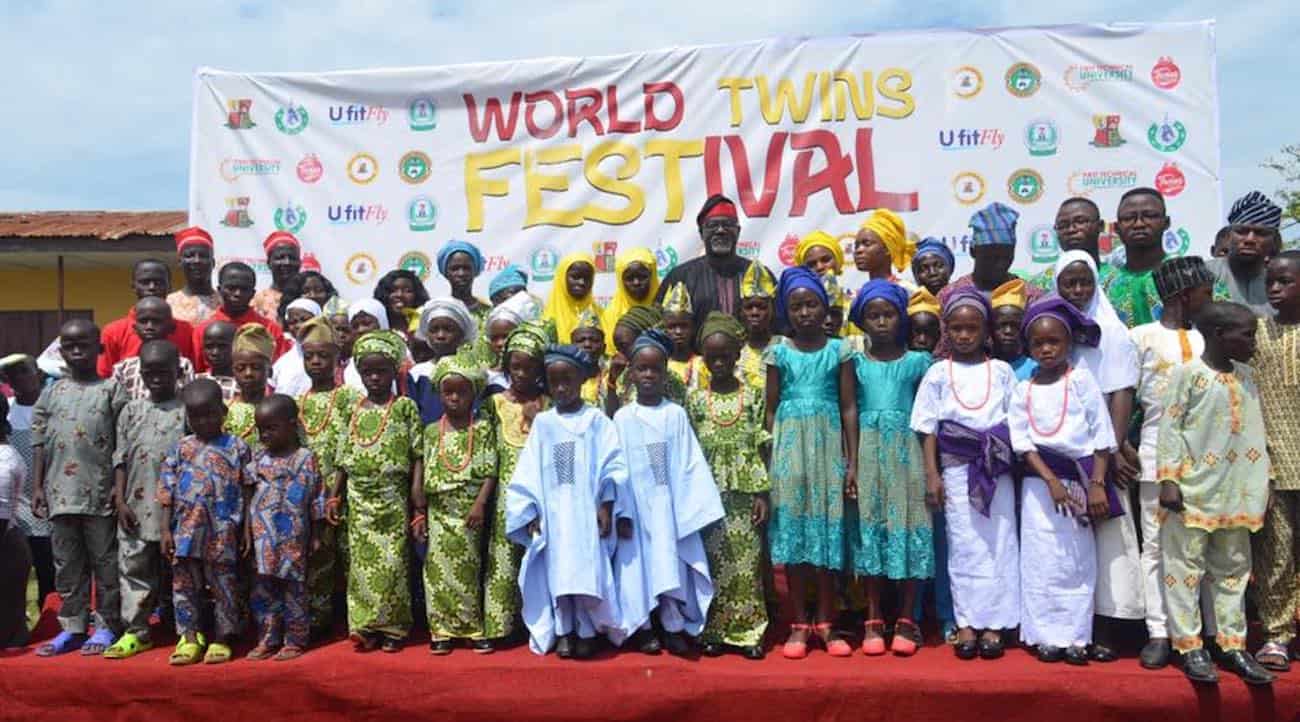 Whether identical or fraternal twins straddle an ambiguous and paradoxical line by existing as a ‘singular entity’ but living a distinctly different experience. Traditionally twins for better or worse are conjointly wrapped in the rites and rituals, elaborate celebrations and dedications, meant to appease their contradictory existence.

In African mythology different cultures view them in their own way: The Igbo of Nigeria believe that twins are an omen sent from God, the Yoruba of Nigeria and Benin Republic refer to them not only as ibeji, double-birth, but as ejire, the intimate, inseparable two, similar to the Egyptian God, Nut, and the Egyptian Goddess, Geb, that are depicted as lovers, and twins, the Ga-Adangme of Ghana view twins as irresistible, ‘desirable anomalies’ the Temne of Sierra Leone tell of mythological twin brothers miraculously stitching together two diverging roads, forever fusing their destinies and to the Dogon of Mali, a set of twins represents perfection and completion.

In present day some of these cultures celebrate twins in unique annual festivals in ode to these ‘two halves of a gourd’. These festivals include:

Igbo Ora town located in Oyo state, Nigeria is called “The Twin capital of the world” allegedly because more twins are born there than anywhere else in the world. In what seems long overdue the state government, with the support of other stakeholders, facilitated the maiden “Twins Festival” which brought together twins from all ages and genders. Reports indicate that over 2,000 sets of twins were present at the elaborate event in 2018

Toye Arulogun last year laid the foundation of the twins tower to commemorate the festival. In his address, Arulogun said that twins were invited to celebrate twins and multiple births from Igboora in commemoration of the Twins Festival, saying that the festival was a platform to showcase Igboora town with the unique feature of the highest rate of twins and multiple births in the world.

He confirmed that the festival, which was organised in collaboration with Twins World Creations, Ibarapa Central Local Government, Igboora Progressive Union and the Nigeria Tourism Development Corporation, witnessed 2034 set of twins’ registration, adding that the attendance also covered tens of multiple births.

A pair of Female ere ibeji twin figures in the permanent collection of The Children’s Museum of Indianapolis. “Twins hold a special place among the Yoruba of Nigeria where they have the highest rate of twin births in the world. They are protected by the God of Twins, called Ibeji, and are believed to have the power to bring good fortune, health and happiness to their families. Even after a twin dies, its spirit continues to watch over its family.

Every August, the people of Ga Mashie convene to celebrate the twins in the community. The Twin Festival Spirit Procession is referred to locally as the Ye Yee Ye festival and is part of the annual Homowo celebrations. The word Homowo means ‘Hooting at Hunger’ and the Ga people celebrate Homowo in the remembrance of the famine that once happened in their history in precolonial Ghana.

Families with twins perform special cleansing rites in their compounds, before embarking on a celebratory procession through the town to the spiritual house of the Ga Mashie.

In the past when a mother gave birth to twins in Uganda, people would fear and question it as it was seen as taboo. Over time, rituals were conducted to cleanse the twins; in the Kinyoro culture, two goats would be slaughtered, prepared and people invited to eat and cleanse the twins of any bad luck.

Now at this annual festival, twins are celebrated, and event goers will be treated to multitudes of twins dressed alike and for the girls and women wearing similar hairstyles. Last year, Uganda’s oldest twins, 86-year-old Emirina Babirye and Christine Nakato were even in attendance.